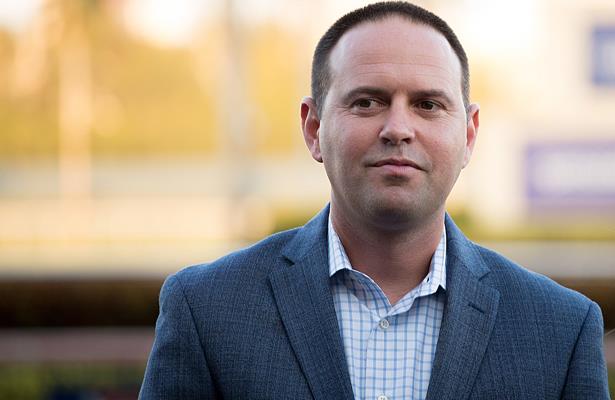 One method for non-speed figure makers to “check” the numbers is studying how the competition fared next time out. If it looks like most of the field earned higher numbers one start later, then maybe the given figure does not reflect the true ability of the horse in question.

In the Grade 3, $200,000 Pennine Ridge Stakes at Belmont, Demarchelier shows lower speed figures than his favored stablemate Value Proposition, but there is reason to believe the numbers do not tell the full story.

Also, this week's Friday 5 contains a standout best bet in John Jones, who projects to secure an uncontested lead at Laurel Park, along with picks for races at Monmouth, Gulfstream and Churchill Downs.


Of the two Chad Brown entries in this race, 9-2 Demarchelier is more intriguing because of who he defeated in his Keeneland allowance win.

Demarchelier’s two TimeformUS figures are 99 and 97, but this colt beat Award Winner, who returned to win an allowance race at Churchill Downs with a 106 TimeformUS Speed Figure. He also beat the third-place Shootin the Breeze, who ran a closing third with a 108 in the James W. Murphy.

The stablemate Value Proposition ran a 105 while breaking his maiden at Belmont, but the class of the race is questionable. The second-place Downside Risk ended up a disappointing sixth in his next maiden start with a 98 on TimeformUS, losing by 16 lengths. Also, the fifth-place Dillon Rocks lost a maiden claimer next time, although he did run second.

Demarchelier’s value may hold, too, and not only because of Value Proposition. Known names such as Social Paranoia, Clint Maroon, Seismic Wave and Henley’s Joy are entered, which means the public will spread their money and help make Demarchelier a good value.


According to TimeformUS Pace Projector, 6-1 John Jones is predicted to set the pace through slow fractions in this turf optional claimer.

If he repeats his last race, this is a winner.

To recap, on May 3 John Jones initially took pressure from two horses through fairly swift fractions. TimeformUS does not mark the pace as fast, but visually it looked fast with one pacesetter and two aggressive pressers.

On the far turn, John Jones then put away his pace foes and opened up on the field, but he got a little tired at end when facing the wave of closers.

Given John Jones accomplished all the dirty work, the slight fade is understandable. If this field leaves him alone early, he will reserve enough energy to win.

Empire of War is the favorite at 5-2, and he faded to third by more than nine lengths in his 2019 debut in the Woodhaven Stakes. The yielding turf is not an excuse, either, as he won over wet turf twice in his 2-year-old season.

Chilly in Charge and Solidify are synthetic runners who never raced on turf.

Dunph finished a disappointing eighth at 5-1 in the Transylvania Stakes (G3) in his only turf start. What makes the connections believe he can rebound on turf here?

As for Swamp Rat himself, he finished second by a head in the Sophomore Turf Stakes at Gulfstream, which was restricted to state-breds. But it is notable the winner Global Access returned to finish second to Skywire in the Wando Stakes at Woodbine and win the Marine Stakes (G3) over Skywire.

TimeformUS awarded Swamp Rat a 109 for his runner-up finish, which is the highest last-out figure in the field. He looks like a probable winner.


Two factors make 4-year-old gelding Scotuscare earn a spot on the list: the move to Jorge Navarro’s barn and the lack of speed in the race.

Regardless of what methods Navarro uses, his horses run well for him in the first start off the claim. He also prefers putting his new horses on the lead, and they stick there no matter how the fractions go. Scotuscare, at 7-2, already owns some speed and he will get his best chance if sent up there to lead.

It is not the business of this blog to critique on how trainers operate, but rather to point out that handicappers need to take advantage.

Expect an improved performance from Scotuscare.


Wilbo deserves another chance against the favorite Share the Upside.

When the two sprinters last met in April, Share the Upside pressed a slow pace and got the jump on him once the pacesetter began to fade. Wilbo tried to come up outside, but he could only reach second with one last move.

With a faster pace, Wilbo might turn the tables at 3-1. The TimeformUS Pace Projector calls for a slow pace, but Mr. Crow and Zipp On By can apply the heat if their jockeys play aggressively.

In any case, Wilbo’s value is higher than Share the Upside. If a win bet is played, then Wilbo will get this blog's money at 3-1 or higher.