Friday 5: All Out Blitz a capable Kona Gold Stakes alternative 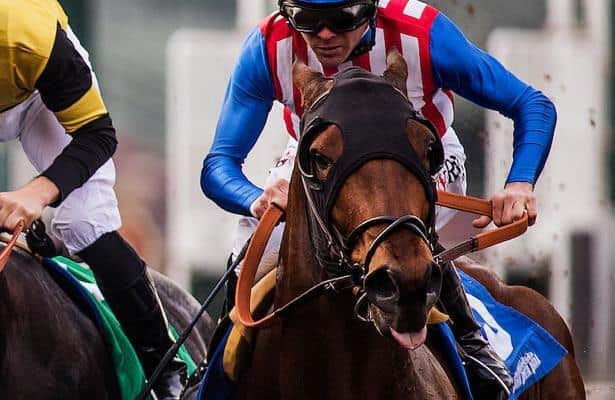 While pace handicapping is important, it becomes overrated at times...and that's a strange statement for me to make on a pace-orientated blog. The point is, when the public can easily see one horse will secure an uncontested lead, it causes him to take too much money.

As bettors have gained access to modern tools, it became easier to spot extreme pace scenarios. But it also kills some of the value that pace handicappers enjoyed before.

In the Grade 2, $200,000 Kona Gold Stakes on Saturday at Santa Anita Park, Cistron looks like an obvious uncontested leader using the TimeformUS Pace Projector. Is there an alternative that will not attract attention? The race also includes two familiar names in Dr. Dorr and Kanthaka, and both of them will take money.

I'll attempt to beat all three of those horses with an expected overlay, and give out four picks for the same day spread across at Laurel Park, Keeneland and Gulfstream Park.

All Out Blitz (4-1) is in good form for Simon Callaghan after a nice win at Sunland Park in the 6 1/2-furlong Bill Thomas Memorial Stakes. While it's easy to dismiss such a result, note the presence of Chief Cicatriz, Classy Class and Limation as also-rans.

He earned a 117 TimeformUS Speed Figure, which fits well in this group.

Two races ago, All Out Blitz faded to fifth by four lengths in the Razorback Handicap (G3), but he probably prefers races of one mile or less.

Pace Projector believes Cistron will lead. However, All Out Blitz is not far behind, and if the slower Santa Anita dirt track can gobble up Cistron’s speed, All Out Blitz can attack first and take over on the turn. Dr. Dorr and Kanthaka will hopefully begin their runs too late.

If the public defaults to Dr. Dorr and Kanthaka out of bias, then All Out Blitz might offer more value than expected. Any bridgejumping action on Dr. Dorr means a show bet on All Out Blitz is logical as well. Otherwise, a win/place bet at 4-1 or higher is fine.

Out of the five picks listed in this post, this is the most exciting one because the race contains a suspect favorite in Las Setas and second choice Our Super Freak. Neither filly owns two-turn experience, giving hope to the higher-priced options.

While Trapped N My Mind (12-1) lacks a two-turn race as well, the pedigree is there to get the longer distance. Ignore Trappe Shot for a minute. Underneath, the dam Paraskevoulla is a half-sister to Remember Ike, who won up to nine furlongs.

Also, Trapped N My Mind runs like a router as she displayed even running lines at Delaware last fall, losing by a few lengths each time. In her March 30 return at Oaklawn, she finished second by a head, but it feels like routing will suit her more.

Is 12-1 realistic? She looks too good to end up at those odds by post time. If she remains double-digit odds, that is a great price on a filly moving up.

This is a must-bet for me.

To be honest, this pick is more of a 12-1 shot in the dark. But there are a few important positives to point out, including his recent fifth-place finish at Santa Anita.

Because the dirt track on Feb. 9 was speed-biased, Spin Lightning’s effort from last to pick up fifth was not terrible. Also note the winner, Much Better, went on to run fourth in the Gotham Stakes (G3) and second in the Bay Shore Stakes (G3).

The blinkers come on, which may help Spin Lightning show a little more speed. Plus, Pace Projector believes the early fractions will go fast, setting up his late kick.

If Spin Lightning can get a clear path on the expected wet track this weekend, then he will make noise in the stretch run. It will help if all the speed horses stay in, too. When it comes to rainy days, many connections opt not to run.

Accept nothing less than 10-1.

Out of the two fillies from the local Any Limit Stakes, Brunette Princess (6-1) looks slightly more appealing than Getting Warmer, as she did more running and earned the win.

Now the two fillies return in this spot and face some speedy rivals in A Bit of Both and Karama. Brunette Princess was defeated by A Bit of Both two starts back, but on paper Karama is set to keep the latter company, possibly setting up a speed duel.

None of the other contenders besides Brunette Princess or Getting Warmer look reliable enough to take advantage. Amy Farah Fowler does own successful stakes experience, but her races came over synthetic at Presque Isle Downs. Warrior Empress and Talkback are speed horses too and likely to get burned by the expected fast pace.

Brunette Princess needs some help from a setup, but she can win if it develops.

Going on Brisnet Speed Ratings, Garter and Tie (4-1) is the only horse in the field to break 100. In fact, he broke 100 twice last year on this same racetrack.

His last in-the-money finish came in the Mucho Macho Man Stakes, when he ran third by a little over two lengths in a decent effort against good 3-year-olds.

Afterwards, the connections understandably tried the Derby trail. Garter and Tie did not make it after missing the board in the Holy Bull Stakes (G2) and Florida Derby (G1).

Now, he cuts back to seven furlongs against softer. The race contains an interesting Todd Pletcher colt named Promo Code, who broke his maiden last month, and the familiar speed Gladiator King. If those two duel, it will set up for Garter and Tie.