Analysis: Can Flameaway, Lone Sailor be beat in Ohio Derby? 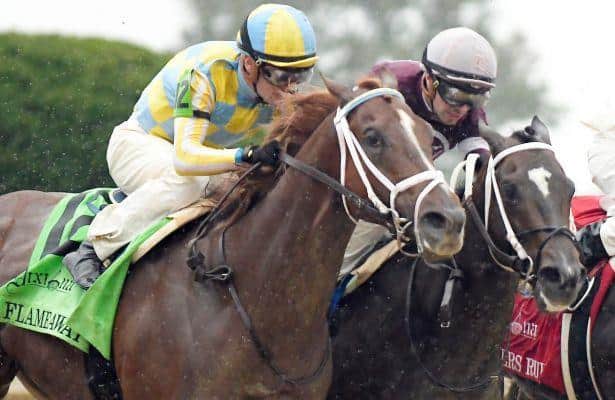 While the Kentucky Derby is in the rearview, the 3-year-old horses who ran are not forgotten. Flameaway and Lone Sailor will battle Saturday in the Grde 3, $500,000 Ohio Derby at 1 1/8 miles at JACK Thistledown Racino, heading a field of 12.

Both horses will attract money in the wagering pools based on their Derby participation alone. Bettors need to be careful, though, when it comes to Derby also-rans. Not too long ago, 10th-place finisher Solomini was heavily bet in the Affirmed Stakes (G3) at Santa Anita and finished third at odds on. When it comes to Derby horses, it is easy to get caught up in fan bias and side with familiar faces.

With that point in mind, are Flameaway and Lone Sailor really the best horses in the Ohio Derby? Unfortunately for value seekers, both Derby also-rans seem well spotted.

Flameaway pressed an insane Derby pace and got cooked in the end, finishing 13th, more than 30 lengths behind Justify. But just cross that out. His real form showed at Keeneland when he finished second to Good Magic in the Blue Grass Stakes (G1).

TimeformUS awarded Flameaway a 122 for his runner-up effort, and a repeat of that might be good enough to win the Ohio Derby for trainer Mark Casse. Furthermore, this horse finished a good second in the Tampa Bay Derby (G2) closing against a slow pace, and won the Sam F. Davis (G3) earlier in the year.

Check out the June 16 work when Flameaway posted four-furlong workout in 48 flat, the eighth best time out of 103 horses that morning. According to the Pace Projector, Flameaway should set a hot pace and possibly endure some pressure.

In contrast, Lone Sailor will come from his usual closing position.

While Lone Sailor is a good horse, his 1-for-10 record is a concern. This kind of horse does not like to win, and his closing style will not help matters.

On the other hand, he just ran in two-thirds of the Triple Crown, and most handicappers can forgive those kinds of losses. He actually made a nice closing move in the Preakness, finishing fifth by two lengths in the slop. He arguably ran well enough for better in the Derby too, considering Free Drop Billy shut him off early on the far side.

Lone Sailor is the kind of horse who benefits from a hot pace, as his strong second-place finish in the Louisiana Derby (G2) also shows, and he should get one. The question is whether he wants to win, and what price bettors can take. It is a good sign Lone Sailor’s rider, Irad Ortiz Jr., will travel to Thistledown for this race.

For those searching for a mild upset, Core Beliefs might be next in line. He recently finished second in the Peter Pan Stakes (G3) at Belmont, posting a 120 TimeformUS Speed Figure. He also ran a distant third in the Santa Anita Derby (G1) to Justify, earning a 124 in the process. He can win if he repeats that number.

It is a slight concern that Peter Pan winner Blended Citizen performed poorly in the Belmont Stakes next time out, and Just Whistle eased in his next start. Still, Core Beliefs is lightly raced and fits well against Grade 3 competition.

Other bettors may want to consider Diamond King, who ran seventh in the Preakness after not showing any speed at all. He does own nine-furlong experience, capturing an ungraded Laurel Park stakes in April.

Diamond King will need to step up his game, and the pace will work against him if he decides to display his normal speed. But he might be able to work out a good stalking trip.

Also in the field is Title Ready, who turned in a runner-up effort in the Sir Barton Stakes at Pimlico to Ax Man. Ax Man returned with a clunker in the Matt Winn Stakes (G3) at Churchill Downs, but maybe the highly-regarded colt had an off night, or overly bennfited from the Pimlico slop.

For pedigree enthusiasts, Title Ready is the grandson of Personal Ensign, a legendary filly who ended her career undefeated by taking the 1988 Breeders’ Cup Distaff.

If seeking a double-digit odds selection, consider Dream Baby Dream, who finished fifth in the Sir Barton and well behind Ax Man and Title Ready. The circumstances could change here, as he now gets a fast pace and probably a better surface.

Dream Baby Dream’s seventh in the Arkansas Derby (G1) was not terrible either, if factoring in the slow pace set by Magnum Moon. It gave closers no chance.

Hall of Famer Steve Asmussen trains Dream Baby Dream, yet this is the kind of horse who can get overlooked in wagering because he needs the right scenario to fire.

If Flameaway battles up front with cheap speed, and Lone Sailor either gets caught in traffic or hangs again in the stretch, Dream Baby Dream can get involved. This horse is a factor to hit the board at long odds.

Give Takedown and O’Kratos small glances as well, with the latter making his dirt debut. Note that O’Kratos has been working bullets over Woodbine’s dirt training track. But predicting how a synthetic horse will transfer over dirt form is still difficult.

On a final note, it is mind-boggling trying to understand what Caloric’s connections see in this horse to place him in the Ohio Derby. His lone win came at the $16,000 claiming level at Gulfstream in February, and while he lost by three lengths at Presque Isle against Trigger Warning, synthetic margins are smaller. He will not fare well.

Machismo’s presence in this race is noted, too, but it is better to pass.

Flameaway and Lone Sailor are the horses to beat, and neither one can be dismissed. Derby attachments aside, they hold the best form. Either throw in some longshots underneath, or backwheel key a longshot such as Dream Baby Dream.