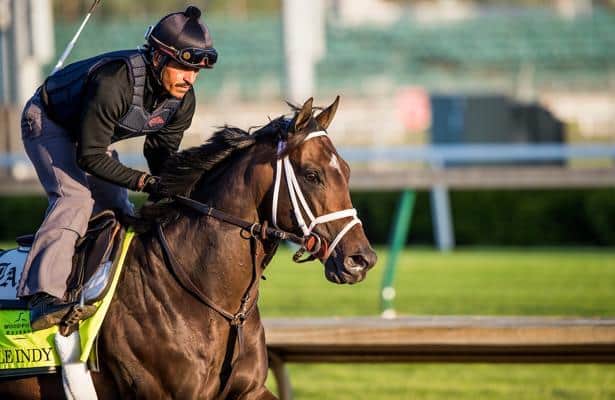 Smaller money bettors will be glad to hear TVG is offering another "Money Back Special" promotion where players can get up to a $10 refund on their Win bet for all Belmont Park races Friday and Saturday, as long as their pick finishes at least second or third.

There are a few asterisks to the deal. For the refund on third-place finishers, there must be at least eight horses running. For a second-place refund, six horses or more must start. Pay attention to the scratches as the day goes on.

Because second or third-place runners are refunded for Win bettors, it might be more beneficial to choose longshot closers who “clunk in” late. The strategy will not work for every race, so try to remain adaptable, but eventually one of those closers will win.

With the "Money Back Special" rules in mind, here are five horses to focus on for Saturday:


If nothing else, this horse will be in the right position as the TimeformUS Pace Projector places him sixth and outside in the early stages. The pace will be fast, which should help his closing kick. Toss out of the disappointing Peter Pan (G2) effort, as the slight cutback will help him. A few readers might not think 9-2 constitutes value, but the odds may rise considering the race features Mask, Rugbyman, Dark Vader and the promising Breaking the Rules. Expect him to at least pick up a piece, if not win.


For two races in a row, she ran well while showing speed on closer-biased days. For those with TimeformUS, the closer bias is coded in dark blue or light blue on the left side of the race names. In the Ruffian Stakes (G2), the race was coded in dark blue and Highway Star made a good move on the far turn before Pacific Wind passed her. Ignore the Aqueduct flop in March, as they ran her unprepared off the layoff. If the heavy favorites American Gal and Abel Tasman flop, this gal can win.


This pick is based more on potential than anything. He is a 4-year-old colt with a 3-for-3 record, and his numbers are steadily improving going into this turf sprint. TimeformUS awarded a 120 for his win at Gulfstream in March, which is competitive here. The connections are also solid, as TimeformUS labels trainer John Servis “Hot.” Jose Ortiz hops aboard, so no one will complain about the jockey, either.


I discussed the Derby pacesetter in detail in a separate post. While the TimformUS Pace Projector marks the pace as hot for the Woody Stephens, Promises Fulfilled can possibly sit just behind the speed and take over at the right time. This is a horse who endured a brutal Kentucky Derby and Florida Derby pace. The double-digit losses will scare away a lot of bettors, but this is still a horse with talent. He cuts back to seven furlongs and will likely enjoy the elongated sprint format. If his odds become too slow, then also consider the closer Givemeaminit at 30-1, who will enjoy cutting back as well.


A few readers might feel this Pletcher horse is a rabbit for Vino Rosso. Mike Repole made a comment suggesting Noble Indy is going to the front, but what was he supposed to say? Noble Indy is a speed horse, so it is obvious where he will be placed. Toss out the Kentucky Derby, as it normally is a strange running line that cannot be used to indicate current form for also-rans. If Noble Indy gets out with moderate to slow fractions, he might stick around and the rest of the field, minus Justify, may be too tired. Of course, Justify needs to throw a clunker. At 30-1, it is worth a shot.

Barn Tour: Motion on what's next for Spendarella, other talent
As he rattled off status updates on some of the pr...