Expect fast pace in Pegasus World Cup, but not a collapse 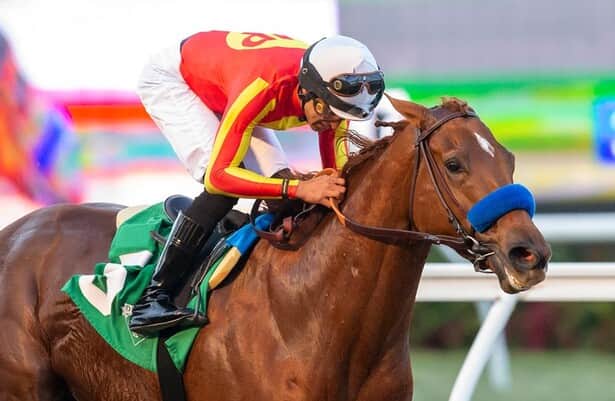 As usual, bettors are treated to a full field and a probable fast pace scenario in the Grae 1, $3 million Pegasus World Cup Invitational at Gulfstream on Saturday. Whenever the gate is full in a Grade 1 dirt race, multiple speed horses generally are present. But an expected fast pace does not always lead to a mid-pack type or late closer winning.

In this situation, the question is whether the expected pacesetter Defunded will receive enough pressure early to fade. It depends on how well some of his pace rivals break from the gate. Defunded is trained by Bob Baffert, whose horses are hard to pass once they lead.

Is Defunded certain to go from the start? From a quick glance at his past performances, Defunded always starts his races either first or second through the initial quarter. Furthermore, Baffert tends to instruct his jockeys to let his speed horses go.

On paper, there are four possible other speed horses in Ridin With Biden, Art Collector, Stilleto Boy and the expected favorite Cyberknife, who must overcome a wide post position. Ridin With Biden belongs at a lower class level, and Art Collector has never been one to get caught in crazy fractions. Art Collector prefers to contest the pace in "normal" races.

If asked, Stilleto Boy can show dangerous speed. For example, Stilleto Boy recently put the heat on the Baffert-trained pacesetter Hopkins in the San Antonio Stakes (G2) and put him away on the far turn before Hopkins’s more well-known stablemate Country Grammer passed them both.

Starting from post 11 could be a factor. To his left in post 10 is Cyberknife, and both horses will attempt to sprint from the start and cross over the field. To join Defunded up front, Stilleto Boy needs to outfoot Cyberknife or hope the favorite breaks poorly, and then cross over him before the turn.

Even though Cyberknife runs more naturally as a stalker, he can set or contest the pace is necessary. For example, in the Travers Stakes (G1) last August, Cyberknife set a lively pace with a 47.63-second half-mile before Epicenter overcame him on the far turn and began to pull clear in the stretch run.

For a 1 1/4-mile race at Saratoga, 47 and change is a grueling half. To Cyberknife’s credit, he still did enough to hold the runner-up spot.

From post 10, there is almost no question jockey Florent Geroux will attempt to hustle Cyberknife from the start and give him the same pressing trip Gun Runner enjoyed in the 2018 Pegasus World Cup. Back then, Gun Runner cleared every horse except the Baffert-trained pacesetter Collected. Gun Runner took up the pressing position next to him.

In other words, this might feel like déjà vu for Geroux, who sits on the best horse from post 10 and must target a speed horse from Bob Baffert’s barn again.

If Cyberknife breaks sharply and crosses over well enough, then yes, the pace might heat up if he can sit off Defunded’s flank through the backside. From there, Cyberknife can attempt to wrestle the lead away on the far turn.

But as stated above, Baffert-trained pacesetters get brave on the lead, even if a good horse or two chases them nearby. His pacesetters tend to last a long time and hold on, which will make it hard on Cyberknife.

Will White Abarrio join the mix up front? With aggressive handling, he probably can join the leaders. But from post 4, jockey Tyler Gaffalione is more likely to tuck in behind the leaders and save ground before moving on the far turn.

Remember that a fast pace does not necessarily mean the front will collapse or that a speed horse cannot hold on. Seasoned runners such as Defunded and Cyberknife know how a fast pace works, and one of them might endure the pace and go on to victory anyway because both horses possess enough ability to endure a fast pace and run well.

This feels like another situation where a speed horse or stalker will prevail and maybe a closer or two will pick up the pieces and add value underneath.

In other words, Defunded and Cyberknife bettors should not let a fast pace discourage them. It matters more whether Cyberknife and Stilleto Boy can cross over cleanly and secure a good position next to Defunded. Otherwise, Defunded will lead uncontested and Baffert will prevail again.