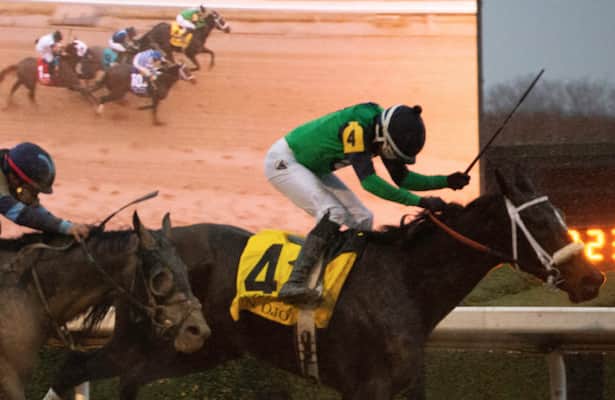 None of the horses formerly on the Kentucky Derby trail face easy assignments in the Grade 3, $300,000 Indiana Derby or $250,000 Iowa Derby on Saturday. The former race will run at Horseshoe Indianapolis, a track formerly known as Indiana Grand, and the latter race will start later at Prairie Meadows.

The ex-Derby trail runners entered in one or both of those races are Rattle N Roll, Major General, Un Ojo and Trademark. For the first three horses, the biggest problem is that none of them stand out as exceptionally fast, and both races contain one or two talented 3-year-olds with promising wins and big speed figures on paper.

For the American Derby, Rattle N Roll earned only a 111 on TimeformUS. Both the runner-up Kuchar and the third-place Red Run had no prior dirt stakes wins and zero TimeformUS figures above 109.

Major General competes in the Iowa Derby for trainer Todd Pletcher. His best race on paper and accompanying TimeformUS Speed Figure make him the most probable of the three ex-Derby trail horses to succeed.

Three starts ago, Major General set the pace under pressure in the Lexington Stakes (G3) at Keeneland in April.

Major General outlasted Strava up front, but the closer Tawny Port went by Major General in mid-stretch for the win.

Even though Major General ended up second, he lost by only one length to Tawny Port. In his next two starts, Tawny Port finished a good seventh in the crowded Kentucky Derby and first in the Ohio Derby (G3) over two former graded stakes winners, White Abarrio and Classic Causeway.

Major General earned a solid 116 TimeformUS Speed Figure in the Lexington Stakes, which is a number that might win the Iowa Derby if he fires again. To secure the win for certain, Major General needs to improve by a few points.

The last ex-Derby trail runner to discuss is Un Ojo. He enters the Indiana Derby after finishing a non-threatening eighth in the Arkansas Derby (G1) at Oaklawn. In February, Un Ojo upset the Rebel Stakes (G2) at 75-1.

In a normal or fast pace, Un Ojo lags toward the back of the field, and that is not idea for winning most dirt races. Even when Un Ojo stalked the pace in the Rebel and won at those huge odds, he earned only a 107 on TimeformUS.

But the one unknown factor for Un Ojo is the trainer switch to Robertino Diodoro. Can this one-eyed gelding move forward for Diodoro? Until Un Ojo runs and reveals his current form, it is hard to know for sure.

All of these former Derby trail runners meet one or two 3-year-olds with surprisingly big speed figures in either the Indiana or Iowa derbies.

For example, Actuator is entered in both races. Last month, he broke his maiden in a seven-furlong sprint at Churchill Downs by an impressive 7 1/4 lengths with the same 116 TimeformUS Speed Figure as Major General.

If Actuator is not scary enough for these ex-Derby trail horses, Conagher is entered in the Iowa Derby, and he won a Churchill Downs optional claimer last month by 5 1/4 lengths with a massive 129 TimeformUS Speed Figure.

But Actuator and Conagher need to prove themselves as routers and stakes horses.

Major General owns the best speed out of the three ex-Derby trail runners. If he can break well and set the pace again, he might forget to stop. Also, Un Ojo is likely to improve for Diodoro, who tends to move horses up. Of the ex-Derby trail horses, Rattle N Roll is least likely to win.

Consider using Major General and Un Ojo in tickets this weekend. But keep in mind the talented races shown by Actuator and Conagher as well.