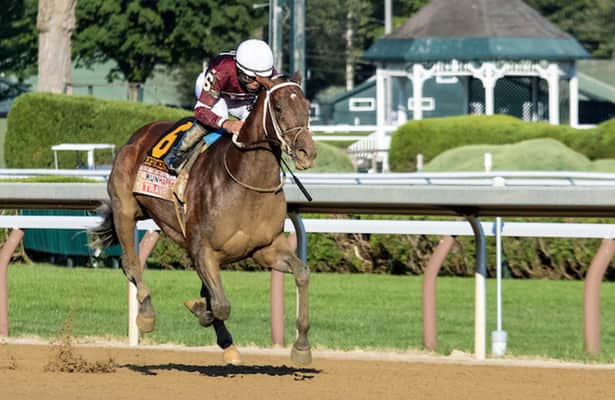 Here is a recap of Epicenter's path to this point.

Epicenter emerged onto the scene last December in the newly created Gun Runner Stakes at Fair Grounds, which he won by 6 1/2 lengths.

After his great start on the Derby Trail, Epicenter’s connections decided to remain on the Fair Grounds path to the Kentucky Derby, and he went on to finish second in the Lecomte Stakes (G3) after a deceptively fast early pace.

Epicenter rebounded in the Risen Star Stakes (G2) against the strongest field of the Derby prep season. He won by 2 3/4 lengths in a group that included next-out trail winners in himself, Zandon and Slow Down Andy, as well as Tawny Port, who won later on. Since Epicenter remained in Louisiana, his next-out win was the Louisiana Derby (G2).

None of Epicenter's spring wins were Grade 1 in name. The Risen Star probably had enough quality for a Grade 1 label, but  it is still a Grade 2 from an official standpoint.

Epicenter then went on to finish second to Rich Strike in the Kentucky Derby after rating patiently from eighth and moving into a suicidal pace. He took the lead while heading into the top of the stretch and held off Zandon nicely, but Rich Strike rallied through the inside of them to win.

In his next start, Epicenter broke slowly in the Preakness and found traffic quickly. Joel Rosario took Epicenter into an uncomfortable position on the rail and near the rear of the field before he rallied to finish second.

At Saratoga, Epicenter finally revealed his true form with an easy win from behind in the Jim Dandy Stakes (G2) over Zandon, Tawny Port and the Preakness champion Early Voting. As stated above, Epicenter then dominated the Travers Stakes (G1) over Cyberknife, Zandon and Rich Strike after stalking the lively pace set by Cyberknife.

Still, Epicenter might need another Grade 1 to lock up the Eclipse Award votes. Cyberknife and Rich Strike are both alive in this race.

Cyberknife already won the Arkansas Derby (G1) on the Derby trail and the Haskell Stakes (G1) over the summer to give him two Grade 1 wins. Sure, Cyberknife took a weak edition of the Arkansas Derby, but it counts. Remember when Zenyatta won Horse of the Year in 2010 because some voters counted up the Grade 1s and argued she had more than Blame?

This week, Cyberknife enters the $1 million Pennsylvania Derby (G1) at Parx Racing with a big chance over a field that looks solid, even without top-rated Epicenter. If Cyberknife wins at Parx, he would own three Grade 1 wins, and that might sway enough voters, especially if Epicenter fails in the Breeders’ Cup.

As for Rich Strike, he captured the most important race of the year, the Kentucky Derby. The Derby is typically weighted heavily in Eclipse Award voting.

Rich Strike did not help his case with a sixth-place finish in the Belmont Stakes, but that marathon is typically an outlier for most horses. In more recent times, Rich Strike did restore some credibility to his name when he moved along with Zandon in the Travers and finished a good fourth. Rich Strike lost second to Cyberknife by less than a length.

Soon, Rich Strike will make his next start in the Lukas Classic (G3) at Churchill Downs before an expected try in the Breeders’ Cup Classic with Epicenter and Cyberknife. If Rich Strike could turn in another credible effort in the Lukas Classic and then post another upset in the Breeders’ Cup Classic, then he could make a strong case for the 3-year-old Eclipse Award.

If Rich Strike wins the Breeders’ Cup Classic, he also could stake a claim to Horse of the Year, as could Epicenter if he takes the Classic. But again, if Flightline shows up at Keeneland, he might make their tasks difficult.

Epicenter has proven himself as the best 3-year-old dirt router, but his hold on the 3-year-old Eclipse Award seems a bit shaky right now. Speaking as a fan, hopefully he finds a way to stamp himself one more time as the best and lock up the needed votes to prevail.