Did the Black-Eyed Susan card reveal an inside dirt bias? 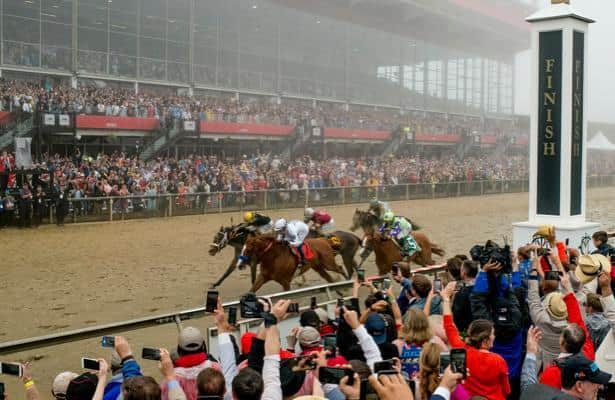 From studying the dirt races on the Black-Eyed Susan Stakes (G2) card at Pimlico, there was a probable inside bias that affected the outcome of a few races. Will the bias hold on Preakness Day?

Determining a bias is never easy though, as sometimes the best horse on paper wins by taking the path of the bias. In addition, dirt races favor speed in general, giving the inside a natural bias in most cases unless the card favors outside closers.

Here is a recap of each dirt race on the card.

After tracking the leader American Fleet in second early, Dr. Jack took over the lead and inside path on the far turn, and then fought off all challengers in the stretch. He won by three lengths. Considering his odds were less than 2-1 though, there were likely strong points in Dr. Jack’s form anyway as the public respected him.

Prodigious Bay set the pace on the rail and won the race in an easy manner in the stretch run, with jockey Joel Rosario not asking him for anything more late.

Again, this is another case where the best horse ran on the inside path and won.

Later on the card though, there are less obvious horses who take the inside and run well.

Wondrwherecraigis went to the rail and took control for the start. From there, he built on his lead and put away all challengers in the stretch for a three-length win.

Although Wondrwherecraigis did not start as the favorite, he was close to it at 5/2.

Spice Is Nice went into a pressing position early as the second choice at 2-1. She then made her ability clear in the stretch and gradually won by 1 ½ lengths.

Dreamalildreamofu never gave up though on the rail until the last few strides. She went off at 10-1 and outran her odds for a nice second-place finish. Also, the late closer Getridofwhatailesu made progress along the inside paths for third at 7-1.

If any dirt race promotes the idea of a golden rail best, it is this one.

In the early stages, Red Ghost led by a small margin on the rail over the pressing Euphoric.

On the turn, Joyful Candence winded up her run on outside of those two runners and went into battle against Euphoric in early stretch. At this point, Red Ghost began to lose some ground and gave the impression of a beaten horse on the rail.

Red Ghost made a resurgence though in the last few strides and to pick up the win. From a visual standpoint, the comeback is hard to believe, even as the 2-1 favorite. Joyful Candence could only settle for third on the outside after looking like the winner for at least 90-percent of the stretch. It feels like the inside bias beat Joyful Candence.

But, the point is debatable since Red Ghost went off at 2-1 and in all likelihood did offer strong points to bettors based on form. Maybe the best horse won. However, most horses do not come back like she did.

Last Judgment made his way to the front and set the pace on the rail. On the far turn and stretch run, he kept maintaining his lead for a strong-looking win at 9/2.

Modernist and Fearless chased Last Judgment in the stretch, but neither of them could make up ground. Instead, they provided a nice battle for the runner-up spot.

Despite starting at even money, Fearless could not run those two horses down from a clear position on the outside.

Lady Traveler led through the early stages. As she took them into the far turn, Army Wife made a noticeable inside move and had to wait for room.

As Lady Traveler stuck to the rail, Army Wife made the switch to the two-path and overpowered a tired Lady Traveler. She built her margin up to win by 2 ¾ lengths.

Willful Woman came into the picture with a mild rally for second, while the rail-traveling Lady Traveler faded to third and four lengths behind Army Wife.

Lady Traveler ran third at 18-1, which means she outran her odds. It is possible that sticking to the rail for the entire race at least contributed to her finish. Army Wife also spent the backside on the rail. Perhaps the rail made a contribution to her victory as well at 9/2, although she did show talent on paper.

The connection between all the dirt races is too strong to dismiss the idea of a “golden” rail on Black-Eyed Susan Day. The bias could change though today on the Preakness card. Keep an eye on how rail horses fare on dirt.