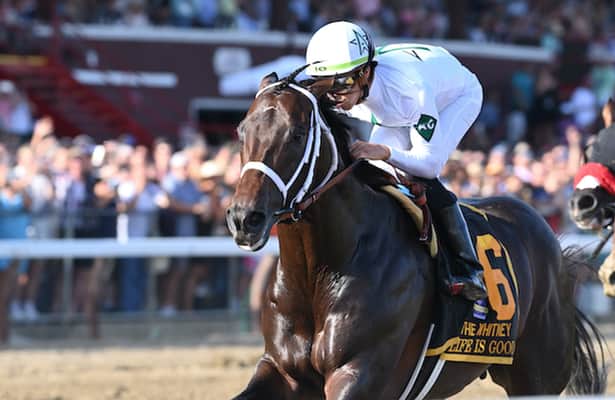 The outcome for the Grade 1, $500,000 Woodward Stakes at Aqueduct next Saturday seems inevitable based on the current probables list seen on the HRN Stakes Tracker. As it stands, Life Is Good is probable to secure the early lead against a couple of overmatched opponents and cruise home to an easy victory.

Blazing or chilly fractions? Find out with the Pace Report

Instead of discussing a straightforward Woodward, a better question is whether Life Is Good can last 10 furlongs in the Breeders’ Cup Classic in November with Flightline on his tail. Also, what if Flightline does not show up to Keeneland? Would Flightline missing the race make it easier for Life Is Good to carry his abundant speed over a classic distance?

If Life Is Good and Flightline both show up and the former's connections opt to run in the Classic, it does not seem likely that Life Is Good could  wire the field with a special horse tracking from second.

Life Is Good already has given the impression of not wanting 1 1/4 miles with his effort in the Dubai World Cup (G1).

In that race, Life Is Good set a comfortable pace with a slight cushion for most of the race over his fellow American shipper Midnight Bourbon. After an uneventful trip on the backside, Life Is Good led the the field into the stretch with no visible problems.

Even without fractions to study, it seems clear Life Is Good did not set a blazing pace. In most cases where the pacesetter goes too fast, he separates from the field, or maybe two or three horses will separate.

From watching the replay, the spacing between each horse felt normal for a moderate pace. Life Is Good and Midnight Bourbon roughly traveled with the field on the backside, rather than in their own world.

Life Is Good appeared to be a horse who failed to get the distance. He had maintained a comfortable lead with a slight cushion over Midnight Bourbon and still failed to finish off the race.

If Flightline was tracking Life Is Good in second instead of Midnight Bourbon, then Life Is Good might really feel the pressure throughout the opening stages. Most horses can tell when a quality horse is running nearby rather than a claiming or allowance runner.

With Flightline, his presence must feel like the total opposite of an overmatched allowance horse because he is capable of posting numbers that indicate a special horse. For his win in the Pacific Classic (G1) last month, Flightline earned an excellent 126 Beyer Speed Figure, according to Daily Racing Form.

In other words, if Life Is Good would had to set the pace with Flightline pressuring him or tracking a length or two behind in second, then he almost certainly would not win the 1 1/4-mile Breeders’ Cup Classic. The extraordinary pressure from Flightline and the distance would combine to make him fade.

As special as Flightline seems, he also seems fragile with the ability to compete about only three times this year. Making the Classic is not guaranteed for him. The possibility of a setback is real.

If Flightline cannot make the Classic, then can Life Is Good win the Breeders’ Cup Classic with a lesser horse or two on his tail? The answer is maybe.

With a full season in tow, perhaps Life Is Good can move forward in fitness and last the 1 1/4 miles in the Classic long enough to win. If Life Is Good receives light or no pressure and starts to open up when they hit the far turn, he could create a big enough margin to last to the end.

In any case, it makes sense for Life Is Good to take a shot at the Classic anyway, especially if he goes off to stud in the following year. Since Life Is Good already won the Breeders’ Cup Dirt Mile, winning it again would feel redundant. The right step is to go for the best prize if the horse will retire.

But Life Is Good does face challenges with the distance and Flightline scheduled to run. If Flightline enters the Classic, Life Is Good will need the best effort of his career, and even then he most likely will come up short.