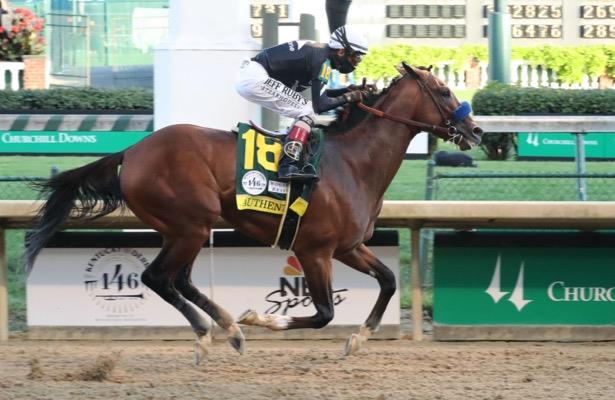 One of the hardest handicapping decisions is deciding whether the pace scenario is truly fast or mild relative to what the horses can handle. Quality horses endure more at the highest levels, making an expected “fast” pace more open to scrutiny.

With that point in mind, analyzing pace in the $6 million Breeders’ Cup Classic off the probables list is difficult. On paper, the race contains speed, but it is unclear whether it contains enough speed to knock out all of the up-front horses.

[RELATED – Breeders' Cup Classic 2020: Who are the fastest contenders?]

On paper, there are three possible pacesetters in Maximum Security, Authentic and Global Campaign. But the only one who is certain to gun for the lead out of the three horses is Authentic, whose four route victories all came after setting the pace.

His stablemate Maximum Security knows how to press or stalk effectively, and trainer Bob Baffert is not likely to send two horses up on a damaging speed duel. Even though Thousand Words ended up contesting the lead with Authentic in the Preakness Stakes, neither horse went at a fast clip with initial 24.48 and 47.65 fractions.

Global Campaign is tougher to analyze. He set the pace in the 1 1/4-mile Woodward Stakes (G1), but the field had only five horses and the presser was Tacitus. Although Tacitus’ connections keep trying to use his speed, he is a natural closer. Also, Global Campaign did not set blazing fractions anyway, with a half in 48.89.

The pressers or stalkers include Swiss Skydiver, Tiz the Law, By My Standards and Midcourt. All four of them figure to settle within one to five lengths of the leader.

Midcourt runs better on the lead, but he probably does not break sharply enough to secure it against the likes of Authentic, Maximum Security and Global Campaign.

In the Preakness, Swiss Skydiver waited near the front until Thousand Words gave way before making an early move and securing the lead before Authentic could take it. If she runs in the Classic, the connections likely will use a similar strategy.

By My Standards could press the leader if no other horse takes up the task. But in all likelihood, he will sit roughly two to five lengths back, along with Tiz the Law.

Depending on his post position, Tiz the Law figures to take a wide, stalking position, as the connections know he does not want to run inside of horses eating dirt.

But again, none of those horses scream pace collapse.

The rest of the probables list on HRN Stakes Tracker shows Improbable, Tom’s d’Etat, Tacitus, Happy Saver and Higher Power, last year’s third-place finisher. Some of them are difficult to categorize because they are versatile enough to run as pressers or stalkers. But in this situation, they are likely to settle farther back.

Improbable set the pace in the Whitney Stakes (G1) only by default. Notice that he went to a closer style in the Awesome Again Stakes (G1), which set up for him.

Tom’s d’Etat’s might find himself closer if asked, but he came from mid-pack to capture the Clark Stakes (G1) last November and the Oaklawn Mile. But in the more recent Stephen Foster Stakes (G2), he adjusted to a tracking position in second. He did close in the Whitney Stakes (G1) afterward, but that effort came after a poor break.

Is this the race where Tacitus gets rid of the blinkers and takes up a closer role again? When an experiment fails, it is human nature to revert to the old strategy.

Happy Saver ran as a stalker in his few races. But in a larger field with higher-quality speed horses present, he seems more probable to fall back early.

Higher Power seems to be another horse capable of switching between a stalker and mid-pack role. But look at the amount of horses that want the stalker position. Some horses will run in mid-pack by default, and others will close from farther back. In last year’s Classic, Higher Power initially ran in seventh before closing for third.

At this point, the race does not contain any natural deep closers. But the lack of deep closers does not equal a fast pace. Rather, it means the middle is crowded and one or two mid-pack horses are likely to take up the rear of the field by default.

Overall, the pace looks moderately fast, judging by the probables list. By the most strict definition, the pace is likely fast but not fast enough to collapse the front.

Again, there is a chance Authentic could secure a comfortable lead or contest a moderate pace with either his stablemate Maximum Security or Global Campaign. Swiss Skydiver or Tiz the Law could move early though and make sure none of those three horses become too comfortable. But the point is that a speed or tactical speed horse is more likely to win the Classic than a mid-pack runner or closer.

Recent Classic history falls on the side of speed and tactical speed as well. When is the last time a horse came from farther back than fourth to win? The answer is Drosselmeyer, who came all the way from ninth and 10 lengths behind in 2011.

In this Breeders’ Cup Classic, look for either a pacesetter or tactical speed horse.