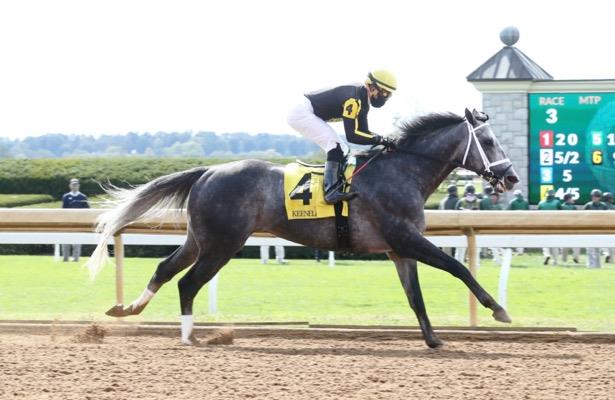 One of the hardest parts about analyzing pace in the Nov. 7 Breeders’ Cup Dirt Mile at Keeneland early is not getting a firm picture of the field. For many connections, this is a spot to avoid top runners in the Sprint or Classic, which are both typically loaded races. A final decision for some Dirt Mile contenders might not come until the last minute.

Here is an attempt using the probables list on HRN Stakes Tracker.

As of this writing, the pace seems fast enough to set up for a midpack or late closer. But again, the field is volatile, which means that opinion could change in the next week or two. Plus, a lot the horses that “could” show enough speed to lead are also capable of pressing or stalking.

Nevertheless, the pace leans towards fast. Why?

For one, it contains the need-the-lead Knicks Go, who must secure the front in order to run his best race. Knicks Go is capable of relaxing once on the lead, but against quality Grade 1 speed horses, he probably needs to work hard to even reach that position in the opening quarter.

Knicks Go ran an optional claiming field Oct. 4 at Keeneland off their feet by securing a one-length lead and blasting off to a 10¼-length victory in the stretch. Two starts ago, he led in an Oaklawn optional claimer Feb. 22 and won by 7½ lengths. Knicks Go also won the Breeders' Futurity (G1) on this course in 2018 with pacesetting tactics.

Expect him to go for the lead again, no matter the cost.

There are a couple of horses in the field capable of making Knicks Go sweat, although none of them require the lead to fire their best shot.

Vekoma set the pace en route to his Metropolitan Handicap (G1) win. Arguably, he set the pace by default though with Warrior’s Charge only a lukewarm pace threat. But if asked, he can probably press early on.

True Timber’s form is an interesting case because he contested a fast pace with Complexity in the Forego Stakes (G1), which means he is capable enough of contesting the pace or leading in the Dirt Mile. But in the more recent Vosburgh Stakes (G2), True Timber did not show any life at all. If he still shows up in the Dirt Mile, he might contest the pace.

Of course, then Complexity is also a candidate to contest the pace or even lead if Knicks Go does not break well. But is Complexity running in this race? The connections might prefer the Sprint because of its one-turn configuration. Also, even if he runs, Complexity is capable of pressing or tracking the pace, as shown in the Kelso Handicap (G2).

Sure, none of those other three horses explicitly need the lead. But will all of them (assuming all run) let Knicks Go loaf on an uncontested and comfortable lead? It makes more sense that one or two keep close.

Behind those four is a big group, with Art Collector, War of Will, Mr. Money, Silver Dust, Midcourt, Rushie and Aurelius Maximum stalking or closing from midpack. Some handicappers might think of Art Collector as a presser, but he is more likely to press at nine furlongs or longer because of the slower pace. Cutting back to one mile, the Blue Grass Stakes (G1) winner is more probable to become a stalker.

War of Will is capable of pressing a fast pace in a one-mile turf race, as shown in the Shoemaker Mile (G1) and Maker’s Mark Mile (G1). In a one-mile Grade 1 dirt race though with other speed, he is more likely to take up a stalker role as well.

Right now, the pace is likely fast enough to believe a horse such as Hog Creek Hustle can mow them all down.

Again, these are only early thoughts with the Dirt Mile field constantly changing as connections weigh their chances in the Sprint and Classic. But the connections of Knicks Go are going to want that slight one-length-or-more cushion on the lead, while the pressers and stalkers know they cannot leave him alone either. If searching for a closer in the Dirt Mile at long odds, then hope Knicks Go shows up to this race.