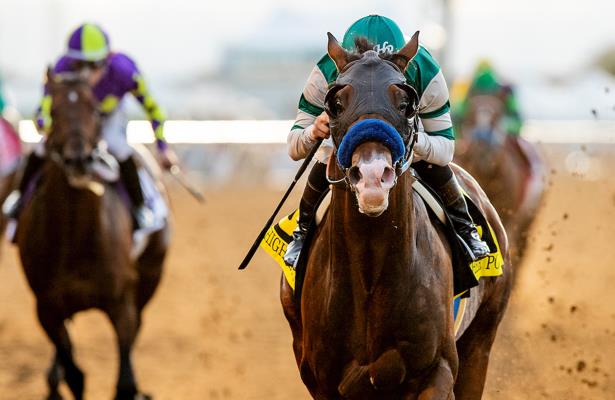 A bad trip in a Breeders' Cup prep may set up a horse for a better result -- and at a higher price -- on the big day. But a horse may still end up too slow given a hike in class, and others tend to create their own bad luck.

So here, we'll run down six championship contenders and separate whether the proverbial line should be drawn through final prep starts ahead of the Nov. 1-2 Breeders' Cup at Santa anita.

In Alandra's career debut, she led from gate to wire with Joel Rosario aboard to break her maiden at Saratoga.

Stretching out to a route distance in the Alcibiades Stakes (G1) at Keeneland, it felt logical to expect Alandra up near the front. But this time Rosario opted to rate her in 10th early, 11 lengths behind the pacesetter.

Alandra began her move approaching the far turn. Once she reached mid-pack, she stalled behind two inside horses and rallied again in the stretch once navigating around them. She traveled well toward the wire.

Running as a deep closer for the first time in an 11-horse field is likely intimidating for a 2-year-old filly. More than a few bettors were unhappy.

In the Juvenile Fillies, it is logical to expect more aggressive tactics with Alandra to stay free of traffic problems. While Alandra may not own the speed to set the pace, she could get into a close stalking range.

But it is a concern that Alandra is not fast enough, even with a clear trip.

Conclusion: Alandra deserves one more chance from bettors, but the price needs to be double digits given she lost the Alcibiades by 9 ½ lengths.

Leading up to the Breeders' Cup Juvenile, Scabbard will become one of the most discussed troubled trip horses running Nov. 1 at Santa Anita Park. Almost everyone saw it.

At the half-mile point of Churchill Downs' Iroquois Stakes (G3), Scabbard moved along the inside and ran up the heels of Zyramid. Corey Lanerie then pulled Scabbard back and lost ground.

However, Scabbard re-rallied strongly in the stretch run, closing the gap on Dennis' Moment to 1 ¾ lengths. The fact that Scabbard stopped and started again later is significant, as most young horses become discouraged.

In the Juvenile, it is logical to expect more speed for Scabbard in which to close.

But does Scabbard's midpack style make him likely to find trouble again in a full field? Favorites Eight Rings and Dennis' Moment both own enough speed to make traffic a non-issue, and Scabbard may get shuffled again.

Conclusion: Even given those concerns, Scabbard is a solid betting alternative in the Juvenile. He handled his trouble in the Iroquois like a seasoned pro and kept fighting.

The first half of Raging Bull's trip in the Woodbine Mile (G1) looks uneventful because of how far back he settled from the main pack. As a tradeoff for not facing traffic issues in the early stages, Raging Bull was left 11 lengths behind.

In the stretch run, Raging Bull made a steady rally on the outside before Lucullan shifted lanes and carried him out, stopping his momentum. It is encouraging that Raging Bull re-rallied in the short time left.

As for the main concern, regardless of any trouble, this horse loses a lot. The overall record says Raging Bull owns five wins in 12 starts, but all five victories came as a 3-year-old. In contrast, his 2019 record is a disappointing 5: 0-1-2.

Conclusion: The lack of one win this year makes it impossible to endorse Raging Bull for the win in the Breeders' Cup Mile, no matter if he went through legitimate stretch trouble at Woodbine. But exotics players will find this late closer usable.

Improbable acted up in the gate before the Pennsylvania Derby (G1) and broke slow, too, causing him to start from last before the first turn.

Because of the strange race flow, Improbable did not lose too many lengths. In the stretch, he had a nice rail opening to slip through if he had enough run to take advantage late. He could only match strides with the main group though, as Math Wizard blew by all of them from the outside.

Improbable traditionally burns a lot of win money, partially because of his inability to break sharp. Those are two big negatives.

A slow break will not go well in a fast race such as the Dirt Mile.

Conclusion: It is difficult to endorse Improbable for the win spot, especially with Omaha Beach's presence. For those willing to take a shot hoping his gate issues don't reoccur, demand double double digits.

It is puzzling why jockey Kent Desormeaux chose to take back Ollie's Candy in the Zenyatta Stakes (G1) rather than follow Paradise Woods. Ollie's Candy broke well enough to secure an up-front position.

Ollie's Candy made a nice middle move though to secure a better position behind the leaders.

But the early move Ollie's Candy made to secure that position took some starch out of her, as she spun her wheels in the stretch. Ollie's Candy did manage to close the gap on the second-place Secret Spice to miss the runner-up position by a neck. Meanwhile, Paradise Woods won by 1 ¾ lengths.

After the Zenyatta loss, the connections will probably not try a closing strategy again in the Breeders' Cup Distaff. Also, Rosario is taking over for Desormeaux in the irons.

Conclusion: This 4-year-old filly is attractive. She owns class as the Clement Hirsch Stakes (G1) winner and great positional speed too, if they use it. Her third-place finish in the Zenyatta will keep bettors away, creating value.

Higher Power stumbled at the start of the Awesome Again Stakes (G1) and ran out of position in his final prep. Remember that in his successful Pacific Classic (G1) effort, Higher Power tracked the leader, Quip in second, before putting him away and winning by 5 ¼ lengths.

In the Awesome Again, Higher Power had to settle in the middle of a compact group. For whatever reason, he did not quicken when Mongolian Groom and McKinzie separated from the rest of the field.

But he did hold third place. It is possible Higher Power requires a more forward position to be effective, and a better break will help that.

Higher Power deserves the benefit of the doubt for the early stumble. Unlike Improbable, this colt is not known as a poor gate horse.

If Higher Power breaks well enough this time, it is easy to see him securing a pressing position in a paceless Breeders' Cup Classic. From there, Higher Power will only need to outlast the other horses with his stamina.

Conclusion: Another attractive betting option. He already shows class from his Pacific Classic romp. Now he stretches back out to 1 ¼ miles again and may offer double-digit odds in a weak Classic field.

Breeders' Cup Classic 2020: See the latest odds
With less than two months remaining until the Bree...