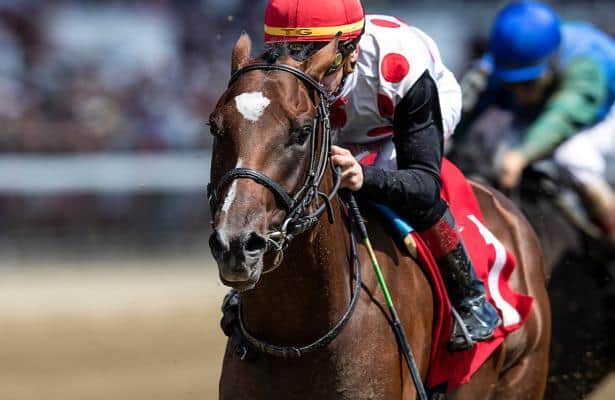 Speed fares well in many editions of the Belmont Stakes and one reason is because the short-winded runners with speed drop out by the third leg of the Triple Crown. Another reason is that the 1 ½-mile marathon distance flattens out the runs of most closers that are built for middle distances.

Unlike previous editions, the 2020 Belmont Stakes on Saturday is scheduled for nine furlongs. But despite its new position as the first leg of the Triple Crown and the shorter distance, speed should be a useful asset once again as the list of probables lacks a significant amount of early foot.

On paper, the only horse that wants the lead is Tap It To Win.

Tap It To Win set the pace en route to victory in a June 4 allowance race at Belmont, winning by five lengths in a 1 1/16-mile route with a 115 TimeformUS Speed Figure. He also ran as a stalker on May 9 in his return win at Gulfstream, which came at a shorter six-furlong trip. Most route pacesetters turn into pressers or stalkers in sprints.

At nine furlongs, there is little doubt Tap It To Win will lead. Out of the probables list though, who will pressure him, or even contest his lead?

Pneumatic is one candidate to press Tap It To Win. In the Matt Winn Stakes (G3), Pneumatic contested the pace on the inside with Celtic Striker and Ny Traffic to his right. However, in his one-mile optional claiming win at Oaklawn Park, he settled in fifth and three lengths off the pace.

Perhaps Pneumatic’s aggressive strategy in the Matt Winn came as a result of his inside post. Sometimes jockeys stuck on the inside utilize more speed than usual in order to retain a good position.

Pneumatic is a pace presence, but he is not a horse likely to get caught in a speed duel. At most, Pneumatic might apply some light pressure.

Similar to Pneumatic, Tiz the Law owns useful tactical speed, but not the kind that gets hooked into a speed duel either.

Tiz the Law ran a half-length behind Ete Indien and Shivaree in the Florida Derby (G1) while traveling wide. His game is following the leaders in a clear stalking position and attacking on the turn.

Tiz the Law used the strategy successfully in the Florida Derby.

In all likelihood, Tiz the Law will find himself 2-3 lengths behind the pacesetter in the initial stages. He can rate if asked.

Modernist led from gate to wire in his nine-furlong maiden win back in January at Aqueduct. He then contested the pace with Ny Traffic in the second division of the Risen Star Stakes (G2) at Fair Grounds and won, taking the race by one length. In the Louisiana Derby (G2) though, Modernist reverted to a stalking position as Wells Bayou led and won.

Regardless of whether Modernist flashes early foot or not, this is not a speed-crazed horse either. He set the pace through crawling fractions in his maiden score, and the Risen Star fractions appear moderate at best.

Dr Post came from fifth to capture the 1 1/16-mile Unbridled Stakes at Gulfstream. At this distance, he might find himself a little closer, but not too close.

Max Player is another midpack runner who closed from fifth to break his maiden in a one-mile race at Parx Racing and closed from sixth to take the Withers Stakes (G3) against mild competition.

Expect Sole Volante to lag towards the back as usual. He came from nine lengths back to finish second in the Tampa Bay Derby (G2).

Farmington Road fell 17 lengths off the pace in the Oaklawn Stakes at one point, before closing for second by half a length to Mr Big News. One start later in the second division of the Arkansas Derby (G1), he fell 7 ¾ lengths behind early on, and only closed for a mild fourth.

Jungle Runner began the first division of the Arkansas Derby in last. No matter where this horse is positioned, he is not a serious threat.

Here is a quick rundown of the pace again:

Sole Volante, Farmington Road and Jungle Runner will compete for last in the opening quarter.

Dr Post and Max Player will find themselves in the middle.

Tiz the Law, Modernist and Pneumatic will either press or stalk.

Tap It To Win will lead.

Unless a couple other 3-year-olds pop up at the last minute, that is the probable pace scenario. Tap It To Win can steal the race on the front end.

Can Tap It To Win handle nine furlongs? That is one important question handicappers need to ask themselves as they dive into their own analysis. On the surface, it does not seem logical that Tap It To Win can win impressively by a clear margin at 1 1/16 miles and not handle a nine-furlong race with only one turn.

Pedigree-wise, there is some evidence of stamina. Tap It To Win’s second dam is Beaties for Real, a half-sister to Ivanavinalot, the dam of the famous Songbird. Songbird set the pace in most of her big wins.

On the other hand, it is always fair to question a popular horse attempting a new distance. In this case, Tap It To Win might start as the third choice. Is it worth the risk of trusting him at a new distance?

As of right now, the pace scenario sets up for Tap It To Win better than any other horse on the probables list. The talented colt only needs to break well and flash his speed in order to give himself the best chance of upsetting Tiz the Law. If he can handle the distance, watch out.