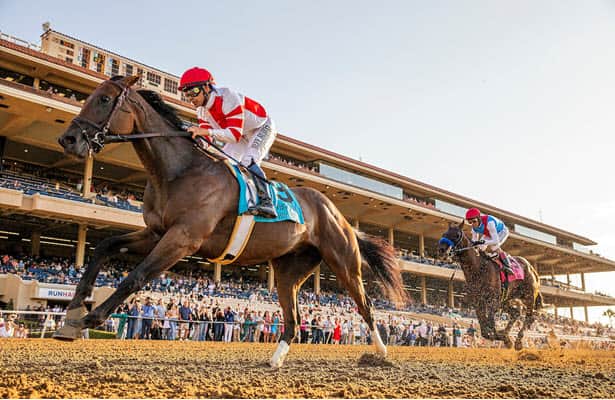 Even though the Grade 1, $300,000 Awesome Again Stakes at Santa Anita lacks the top California older dirt horse Flightline, it still packs a punch with the Dubai World Cup winner present as well as past Santa Anita Handicap (G1) and Pacific Classic (G1) winners and one other Grade 1 winner on foreign soil who transferred his base to America two years ago.

In all, there are four past Grade 1 winners in this race, and those four runners deserve the most respect when handicapping the field.

Get Power Picks for Santa Anita

Here is an introduction to those horses.

Country Grammer enters the Awesome Again as the Dubai World Cup champion. He also brings good recent form after losing the Pacific Classic (G1) by 19 1/4 lengths. Because Country Grammer still ran a 130 TimeformUS Speed Figure and lost to a special horse in Flightline, it does not feel fair to punish Country Grammer for losing by that much.

Take Flightline out of the race analysis. Country Grammer not only led the rest of the field on the far turn, but he also repelled a bid from Royal Ship.

Based on the speed figure and the seven-length margin for second over a good horse in Royal Ship, Country Grammer turned in an effort capable of winning most normal editions of the Pacific Classic. Unfortunately, Flightline turned in a remarkable performance worthy of the “special” label.

With that said, if Country Grammer wins the Awesome Again and Breeders’ Cup Classic, he would own three Grade 1 races for the year and find himself in the mix for the top older horse award and Horse of the Year. If Flightline does show up to Keeneland though, Country Grammer will need to find a way to make up at least 19 lengths on that opponent.

Express Train took this year’s Santa Anita Handicap in March. After finishing second in the Californian Stakes (G2) to Stilleto Boy in his next start, Express Train then went on the shelf until the Pacific Classic in August.

Despite losing by 26 3/4 lengths to Flightline in the Pacific Classic, Express Train did not run terribly. As stated above, Flightline’s winning effort in the Pacific Classic was a special performance. Express Train still shows a respectable 121 on TimeformUS for his effort in completing the superfecta, while missing out on third by only half a length to a fading Royal Ship.

In his second start off the bench, Express Train might move forward. Also note Express Train’s 131 on TimeformUS for finishing second in the Californian. If he can repeat that figure here, then he could win.

As for the third past Grade 1 winner, Tripoli won the Pacific Classic last year before a wide trip led to a troubled fourth in the Awesome Again. The connections took a shot in the Breeders’ Cup Classic, and Tripoli ran a dull seventh to close out a mixed campaign.

This year, Tripoli has been unable to capture his top form after a fourth-place finish in the local American Stakes (G3) on turf and a flat sixth in the San Diego Handicap (G2) at Del Mar. But, cross out the off-the-board turf effort off the layoff. The poor San Diego effort in his second start this year looks less forgivable, but he might need more time than usual to hit his peak.

Last year, Tripoli had six races before the Awesome Again, and this week’s Awesome Again marks only his third race in 2022.

Royal Ship rounds out the list of top contenders to discuss. His lone Grade 1 victory came in Brazil when he won the 2020 Estado do Rio de Janeiro Stakes (G1). He then transferred to Richard Mandella's barn in California. Last year, Royal Ship lost the Hollywood Gold Cup Stakes (G1) by only a head to Country Grammer. But he began to lose form after that effort. After a third at Del Mar in the San Diego and a puzzling seventh in the Pacific Classic, Royal Ship went on the shelf until April.

Although Royal Ship returned this year by winning the John Shear Mile by five lengths at Santa Anita, he turned in a flat effort in the Hollywood Gold Cup with a third-place finish by 4 1/4 lengths. Two months later, Royal Ship won the San Diego Handicap in easy fashion over a returning Country Grammer. But in their next meeting, Country Grammer repelled Royal Ship’s bid in the Pacific Classic in the race for second behind Flightline.

Royal Ship has been a difficult horse to analyze for a while. On his best day, he might run on even terms with Country Grammer. But he also is capable of turning in head-scratching clunkers. The cutback to nine furlongs should help Royal Ship steer the boat in the right direction.

Based on the cutback in distance and his capability of hitting the same figures as Country Grammer, Royal Ship is the official blog selection.

Without Flightline running, a partial letdown is inevitable. But bettors might enjoy this race as they generally do not like the presence of invincible superstars. Plus, as shown above, there are still quality runners, and each of them took interesting roads to get to this point.

For this blog, the play is betting Royal Ship to win at 7-2 or higher. In multi-race wagers, include Country Grammer alongside Royal Ship.