Breeders' Cup: How to play the Juvenile Fillies-Distaff double 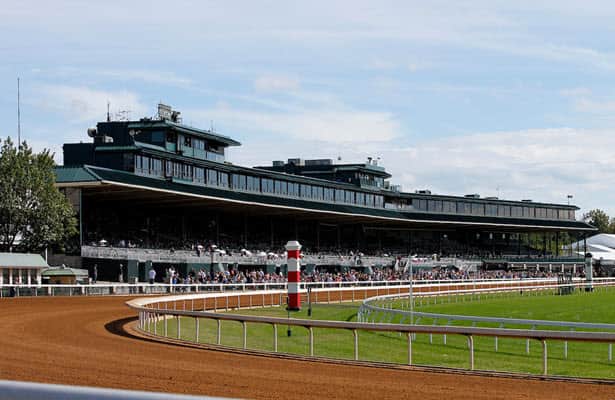 Atomically steps out of state-bred company for the first time to face top competition in the $2 million Breeders’ Cup Juvenile Fillies on Friday at Keeneland. With the special Juvenile Fillies and Distaff daily double in mind, this unproven Florida-bred is the surprising focus of the two-day ticket.

Breeders’ Cup draw: See fields for the 14 races at Keeneland

Here is my reasoning behind singling Atomically in the Juvenile Fillies and my two choices for the $2 million Breeders’ Cup Distaff on Saturday.

The race is just not very strong.

Chocolate Gelato starts as the 7-2 morning-line favorite, and with Todd Pletcher training her she figures to fall in odds a little bit. Chocolate Gelato won the one-mile Frizette Stakes (G1) at Aqueduct in 1:38.57 over the slop. Earlier on the same card, a $25k claiming race at the same distance went in 1:37.09. Granted, those claimers were older horses and not inexperienced 2-year-old fillies, but it deserves a note.

What about Wonder Wheel’s win in the local Alcibiades Stakes (G1)? From a visual standpoint, she was begging for the finish line in the stretch run while holding off late challenges from the green Raging Sea and Chop Chop.

The Alcibiades was the only two-turn dirt route on the entire card. Regardless, it comes off as a bad sign to see three fillies finishing in a cluster with the winner coming off as desperate near the wire. It feels slow.

Out west, And Tell Me Nolies went three seconds slower than Cave Rock when she won the Chandelier Stakes (G1) at Santa Anita in 1:46.15 and Cave Rock won the American Pharoah Stakes (G1) in a blazing 1:43.05.

Atomically arrives as the new face of this group with an interesting win on Oct. 1 in the My Dear Girl Stakes at Gulfstream Park for Florida-breds.

From Post 9, Atomically went at least five wide on the first turn and continued to run wide as the horses straightened out on the backside.

Atomically ended up traveling in mid-pack under a hold. Jockey Edgar Perez began to let Atomically loose while approaching the far turn and she took the lead and already held about a two-length advantage as they rounded the turn.

With only light use of the crop from Perez, Atomically drew away from the field by 6 3/4 lengths and finished the 1 1/16-mile in 1:45.35. Just a few races later in the card, the 2-year-old Awesome Strong won the In Reality Stakes at the same distance in 1:46.58. Atomically finished more than a second faster than Awesome Strong.

In addition, Atomically earned a 99 TimeformUS Speed Figure and 83 Beyer Speed Figure, which Beyer adjusted from an initial 77. Despite the wide first turn, Atomically still overpowered on the field on the far turn and ended the race on a strong note.

Atomically only needs a slight improvement to beat this group. Under her new trainer Todd Pletcher, the step forward is a real possibility.

At 9-2 or higher, Atomically is fair. Do not expect double-digit odds.

Society has made the transformation into a top-level filly.

On Aug. 26, Society took the lead in the Charles Town Oaks (G2) and drew off by 6 3/4 lengths in the end while earning a career high 121 TimeformUS Speed Figure. She improved on her previous high by 10 points.

Then on Sept. 24 in the Cotillion Stakes (G1) at Parx Racing, Society went for the lead at all costs and managed to secure it uncontested through fractions of 23.33 and 46.75 seconds for the 1 1/16-mile distance.

Despite traveling at a fairly swift pace, Society opened up again to lead by six lengths on the far turn before settling for a 5 3/4-length victory at the end over Morning Matcha in second and a tired-looking Secret Oath in third.

For the Cotillion win, Society earned another career high of 124 on TimeformUS. At this point, hitting TimeformUS figures over 120 is her normal effort.

The Distaff lacks another true pacesetter besides Society. She might wire them again if she can break well and sprint off to the lead.

But if the race falls apart, Clairiere might pick up the pieces.

During the summer, Clairiere won the Ogden Phipps Stakes (G1) at Belmont by a head over Malathaat in second with a 126 TimeformUS Speed Figure.

Near the start of the Saratoga meet, Clairiere once again beat Malathaat in the Shuvee Stakes (G2) by 1 1/2 lengths after sitting closer in a stalking position. For the Shuvee winning effort, Clairiere earned a 125 on TimeformUS.

Clairiere threw in a clunker when finishing fifth and last in the Personal Ensign Stakes (G1) after breaking slowly and showing almost no life. Malathaat ended up winning that race by half a length over Search Results.

Regardless, Clairiere deserves one pass for the poor effort. If the race falls apart, she is the second filly to use alongside the speedy Society.

Although Nest can win this race and put a stamp on an incredible season, she might get caught off guard if Society goes for broke and steals the race on the lead, or she might find the older Clairiere tougher than expected.

The lack of value on Nest will probably make her too hard to use.

Society and Clairiere are the final choices.