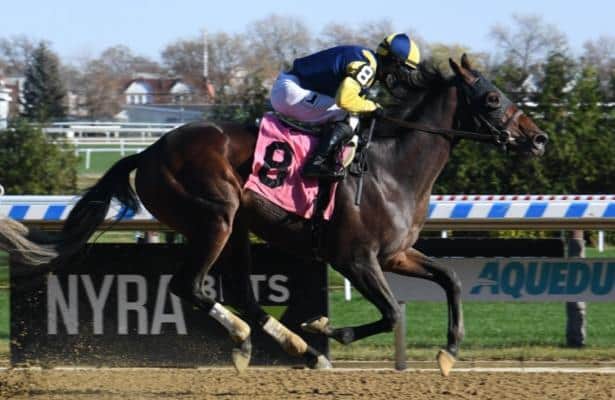 Given the field lined up in the Grade 3, $200,000 Peter Pan Stakes at Belmont on Saturday, a horse does not need a huge amount of credentials on paper to win it. From a betting perspective, this is one of those situations to take a chance on an outsider or a new face rising up.

For handicappers who can find the video (TimeformUS offers replays in their past performances), Wolfie’s Dynaghost winded up his run on the turn of the seven-furlong race and took control of the lead in the stretch. From there, he grew his margin to 1 1/2 lengths at the wire, but he also beat a nice runner in the second-place Weyburn as well as Unbridled Honor in fifth, The Reds in seventh and Dynamic One in ninth.

Weyburn broke his maiden a few weeks later. After taking time off, he won the Gotham Stakes (G3) in March by a nose before finishing a tired fourth in the Wood Memorial Stakes (G2) and bypassing the Kentucky Derby. Weyburn was supposed to run here as one of the main contenders, but a fever took him out.

Unbridled Honor ran a closing fourth in the Tampa Bay Derby (G2). Afterward, he was second in the Lexington Stakes (G3) with a 114 on TimeformUS.

The Reds was only fifth in the Gotham Stakes. But in his most recent start, he won the Federico Tesio Stakes at Pimlico via disqualification.

Dynamic One almost won the Wood Memorial, losing by a head to Bourbonic. He then ran a dismal 18th in the Kentucky Derby, but sometimes the Derby is an outlier and horses bounce back quickly.

For Wolfie’s Dynaghost to capture a Grade 3 off the layoff, he cannot just repeat the November maiden effort. He needs to move forward and prove himself a faster horse since that win, and making the conclusion is admittedly a partial guess.

Yet, why would trainer Tom Albertrani spot Wolfie’s Dynaghost in a Grade 3 off a 175-day layoff unless he could handle the challenge? If Albertrani thought the horse fell short, he might attempt to find an optional claiming or allowance race before tackling a graded stakes.

Also, watch Wolfie’s Dynaghost’s April 25 workout at Palm Meadows, which is available to watch on XBTV. He drills his workmate with nice acceleration, although it is unclear who he worked with.

Albertrani’s statistics off the layoff are a bit troublesome. But a good horse is capable of overriding bad trainer percentages.

Wolfie’s Dynaghost is the top selection.

Promise Keeper also is a threat to win this race. But the Tampa Bay Derby flop is a head scratcher, as he wound up last by 31 1/2 lengths after a brief move. Then at Keeneland one month later, Promise Keeper took a nine-furlong optional claiming race by 5 1/2 lengths with a 112 TimeformUS Speed Figure.

Perhaps Promise Keeper needs Lasix for his best. If that assumption is wrong, though, and he improves a few points, then he may win.

Nova Rags recently kept Soup and Sandwich company on the lead in the Florida Derby (G1) before fading to fourth by seven lengths.

He did not run poorly and still posted a competitive 108 TimeformUS Speed Figure for his fourth-place finish. Competing against lesser in this spot makes him a contender.

Risk Taking gave his connections Derby hopes after winning the Withers Stakes (G3) by 3 3/4 lengths in February with a 109 TimeformUS Speed Figure. A poor seventh-place finish in the Wood Memorial put an end to any Derby thoughts.

Similar to Nova Rags, though, Risk Taking steps down in graded company and could rebound with his best.

Besides those main win contenders, Overtook is a threat for second or third.

Overtook is a long-winded colt with Curlin on top and the stakes router Got Lucky as his dam. He was second to Risk Taking in the Withers Stakes after a late move. Betting-wise, this horse fits better as an underneath option because he is a plodder who rolls into the picture late, and those are not high-percentage winners.

In any case, if Wolfie’s Dynaghost goes off as the third choice or higher, then he is a win bet candidate. Predicting his odds is hard. He did run an impressive maiden race, but the layoff and low-percentage trainer are bound to turn off at least some bettors.

As for multi-race wagers, the list of preference starts with Wolfie’s Dynaghost, followed by Promise Keeper, Nova Rags and Risk Taking. This is not an easy race, but if bettors find the other legs of the Pick 4 easier, they can spread in this leg.

Otherwise, the third option is always to search for better opportunities on the card.