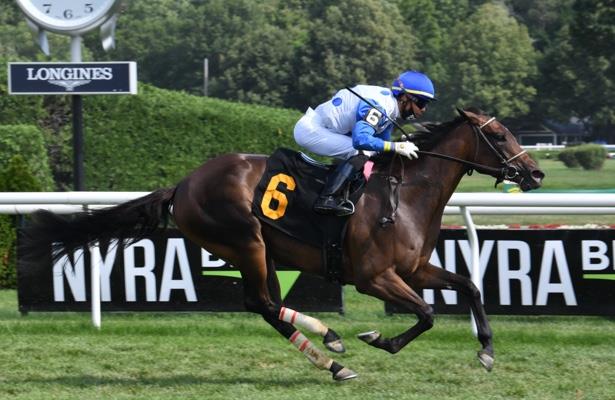 Some fast 3-year-old fillies are lined up in the Grade 3, $150,000 Valley View Stakes on Friday at Keeneland, creating a possible setup for stalkers and closers. The word “possible” is used because anyone who bets for a long time knows that fast pace scenarios change when jockeys grab their mounts, especially on turf.

Assuming the pace is fast, the most interesting closer betting-wise is Witez, who enters this race off a respectable third-place finish in the Lake George Stakes (G3).

Watch Witez (No. 3) switch out on the far turn and mount a rally.

She comes up short but finishes in good company.

The fourth-place Micheline went on to capture the Dueling Grounds Oaks at Kentucky Downs over Harvey’s Lil Goil, before finishing second by 3/4 of a length to Harvey’s Lil Goil in the Queen Elizabeth II Challenge Cup Stakes (G1) at Keeneland.

Sweet Melania, who was runner-up in the Lake George, folded to last after contesting the pace in the Queen Elizabeth II Challenge Cup. The effort is disappointing, but it does not disprove the quality of the Lake George as horses are allowed a clunker. Selflessly’s fifth in the Sands Point Stakes (G2) is not an indicator either, as she is inconsistent.

The slight stretchout for Witez is a small concern, but she did run well for second in a nine-furlong Churchill Downs turf allowance on May 31, losing by 1 3/4 lengths. The winner Crystal Cliffs eventually ran second to Harvey’s Lil Goil in the Regret Stakes (G3).

Witez wound up a dismal 10th in the Regret. On paper, there is no reason for such a poor run, but again, horses are allowed clunkers here and there. Cross the odd effort out.

Finally, Witez’s season-high 108 TimeformUS Speed Figure is competitive enough to win, although it is not the best. A fast pace could set up a higher speed figure for closers.

Witez is the choice, especially if she stays 8-1.

Is there another closer to consider? If Stunning Sky gets the right trip, she could also factor in late and win. But that is a question from Post 11 in a two-turn route.

If the post position does not cause major trouble, her form and class are good enough.

Stunning Sky finished fourth in the Dueling Grounds Oaks after flattening out a bit in the lane, losing by 2 1/2 lengths to Micheline. Some horses do not handle the unique configuration of Kentucky Downs, making the loss forgivable.

Prior to the Dueling Grounds Oaks, Stunning Sky closed for second in the Saratoga Oaks Invitational, losing by only half a length to Antoinette. The winner is not a superstar by any means, but she is a consistent type that usually hits the board.

Three starts ago, Stunning Sky also ran a close second by a head in the Lake Placid Stakes (G2) to Speaktomeofsummer, who recently was second in the Sands Point.

Similar to Witez, Stunning Sky shows an odd clunker in the Regret with an eighth-place finish. She only lost by 4 1/2 lengths, but she never got into the race. At least Witez made some sort of move to close within 1 1/2 lengths before folding to 12th.

Also notable in the Regret is that Micheline finished sixth. Something about that race caused good fillies to throw bad races for no strong reason.

If Stunning Sky handles the cutback, she is a factor, given the expected pace scenario. She broke her maiden and won an optional claimer at the same distance as this 1 1/16-mile contest.

The longshot How Ironic also deserves a small mention. As my choice in the Dueling Grounds Oaks, she disappointed with a flat seventh-place finish. But again, not every horse handles the European-style Kentucky Downs. She might rebound with a good effort here.

But before wagering on any of those closers, make sure all the speed horses remain in the race. According to TimeformUS Pace Projector, Duopoly, In Good Spirits and Sugar Fix are expected to contribute to a fast pace setup. Duopoly in particular looks incapable of rating, at least based on her last two races.

Witez is the main choice, as long as the three speed fillies do not scratch. She drew well in Post 5 and figures to save ground on the first turn. Stunning Sky’s task is more difficult from the outside draw, but perhaps Ricardo Santana Jr. figures out how to overcome the ugly post position and save some run for the stretch.

If only playing a win bet, Witez is the right filly. In multi-race wagers, Witez is the choice, but Stunning Sky is usable as a backup.