Analysis: Why Sconsin holds the edge in Chicago Stakes 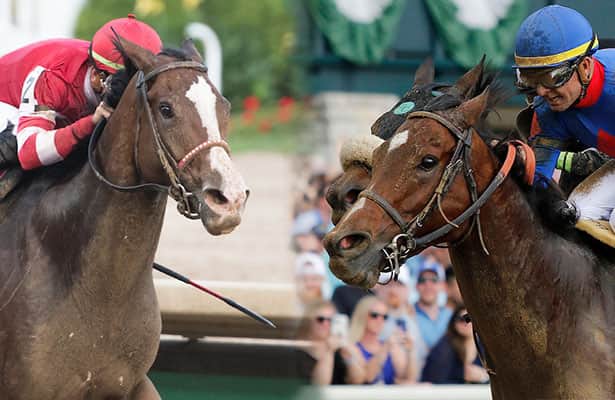 Two familiar rivals in Bell’s the One and Sconsin are scheduled to meet again in the Grade 3, $200,000 Chicago Stakes at Churchill Downs on Saturday.

In their last meeting, Sconsin won by half a length over Bell' the One in the Open Mind Stakes. Last summer, Bell’s the One beat Sconsin in the Roxelana Overnight Stakes.

Bell’s the One enters the Chicago off two losses, which makes it hard to trust the 6-year-old mare to turn the tables on Sconsin.

When Bell's the One started her 2022 campaign in the Madison Stakes (G1) at Keeneland, she rallied wide on the turn and took the lead by mid-stretch, but she could not hold off Just One Time.

Under Flavien Prat, Just One Time had waited for Bell’s the One to move first on the turn, and Just One Time followed the mare from that point.

Corey Lanerie on Bell’s the One did nothing wrong. Even if Lanerie had made the first move, she got outrun by a faster horse late.

Then in the Derby City Distaff (G1), Bell’s the One turned in an effort that makes her overall form questionable. In the stretch run, Bell's the One either did not try her best or could not pass the the other runners.

Bell’s the One had enough pace to run into when Just One Time reverted to pacesetting tactics and set fast opening fractions of 22.36 and 44.95 seconds. To back up the idea of a fast pace, TimeformUS labeled both of those initial fractions in red.

When Bell’s the One set herself up on the outside while running around the turn, she had no reason not to move forward with her usual late punch and contend for the win as in the Madison against Just One Time. But instead of making a huge rally, she made only a mild move.

Meanwhile, Obligatory ran past Bell’s the One in mid-stretch after entering the top of the stretch last. Obligatory went on to pick up the win over Four Graces in second and Just One Time in third. Bell’s the One finished fourth in a disappointing and puzzling performance.

Bell’s the One’s failure to secure even second in the Derby City Distaff is a concern. The wide trip excuse is hard to believe because Obligatory rallied wide and mowed down the field. As stated above, the pace went at a fast clip as well. Bell’s the One simply struggled in the stretch run.

As a 6-year-old mare, maybe Bell’s the One has lost something. It is too early to reach this conclusion for certain. Realistically, though, no horse holds their top form for an infinite amount of time. Good horses either retire early or run long enough for the public to see the form decline.

In contrast, Sconsin has more upside left as a 5-year-old mare. Not only did Sconsin beat Bell’s the One in the Open Mind last September, she came back a winner in the local Winning Colors Stakes at the end of last month. Sconsin won the Winning Colors by mowing down an uncontested leader through slow fractions, which makes the ho-hum 107 TimeformUS Speed Figure for the win acceptable.

When the pace is slow, earning a high speed figure is more difficult. With the right pace and closing punch, Sconsin can earn around the 115 to 120 range on TimeformUS. In any case, getting too caught up in speed figures is a mistake.

Sconsin might offer more value too, as Bell’s the One has slightly more name recognition even though the two runners are familiar opponents.