Analysis: Accelerate may be slowing into Pegasus World Cup 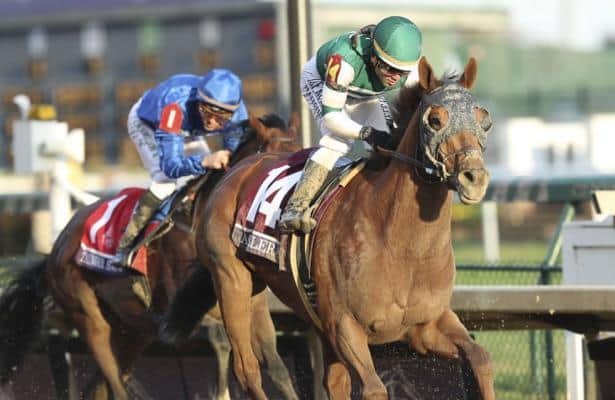 To argue a horse is not in his best form despite winning the Breeders’ Cup Classic initially sounds like an absurd suggestion. The race is the most important dirt contest of the year for older horses and in many cases decides the Eclipse Award champion, if not Horse of the Year.

But when Accelerate starts in the Grade 1, $9 million Pegasus World Cup on Saturday at Gulfstream Park, I'll question whether he can offer another monster effort, as his speed figures declined toward the end of his 2018 campaign.

While the 6-year-old son of Lookin at Lucky can reverse this trend in his final career start, it seems wiser to use him alongside City of Light and Gunnevera, or to throw Accelerate out altogether. The demanding Pegasus will not allow any room for error.

How far did Accelerate’s figures drop?

If he repeats that same effort at Gulfstream this weekend, he will win.

For some reason though, a change occurred in Accelerate's start at Santa Anita, when he struggled to take the Awesome Again Stakes (G1) by only a little over two lengths.

It looked ugly in the stretch run.

Accelerate won, but he dropped to a 122 TimeformUS Speed Figure, 15 points less than the 137 earned at Del Mar. In fairness, Accelerate broke slow and ran wide on both turns while the runner-up West Coast saved ground. But from a visual standpoint, he did not look like the same horse who trounced the Pacific Classic field.

Then Accelerate improved by five points to a 127 when he won the Breeders’ Cup Classic. One can use that number as a sign Accelerate is cycling back to a 130 or higher.

Considering the Breeders' Cup's heavy championship implications, though, it does not seem logical that trainer John Sadler held back something, or that any horse in the Classic field entered the race in less-than-peak condition either.

With retirement coming after the Pegasus, Sadler will attempt to empty the tank on Accelerate at Gulfstream, but it is questionable what is left. Remember California Chrome’s final career race in the 2017 Pegasus? Good form doesn't last forever.

On a positive note, Accelerate drew well in Post 5.

Similar to Accelerate, City of Light started 2018 with an average 123 TimeformUS Speed Figure when he won the Triple Bend Stakes (G1) in March, before peaking in the spring when he fought gamely to capture the Oaklawn Handicap (G2) by a neck over Accelerate with a 133. He also proved himself capable of getting nine furlongs.

City of Light trended downward for his next two starts. He finished a flat third in the Santa Anita Gold Cup (G1), that time losing to Accelerate by more than five lengths with a 126. Despite the disappointing run, the longer 1 1/4-mile distance offered him an excuse.

City of Light went on a short break and returned in late August to compete in the Forego Stakes (G1) at Saratoga at the same distance as his 2017 Malibu Stakes (G1) victory.

Unfortunately, City of Light ran another somewhat flat race, as he moved into position on the far turn but failed to pass the rail-skimming Whitmore in the stretch run. For the runner-up effort, City of Light earned a 123, back to his same number in March.

But those who excused the loss to a wide trip became rewarded in the Breeders’ Cup Dirt Mile. City of Light showed his customary early speed again and kept running in the stretch to win by almost three lengths, stepping back up to 130 on TimeformUS.

City of Light came close to matching his Oaklawn speed figure. As a 5-year-old horse, City of Light is also one year younger than Accelerate, making it more likely he can move forward again this weekend and turn in the monster effort required to win.

Considering City of Light is scheduled to retire after the Pegasus, too, trainer Michael McCarthy will make sure nothing is left in the tank. From Post 3, he is my choice.

The third option to consider for horizontals is Gunnevera, runner-up in the Breeders’ Cup Classic. He also ran second in the Woodward Stakes (G1) and third in the 2018 Pegasus World Cup behind Gun Runner and West Coast.

Needless to say, Gunnevera likes to pick up checks in major races such as this one. With his closing style, the habit is understandable, as a full field presents traffic problems for closers. But if he finds a clean trip and fast pace to close into, it is not unreasonable for him to gobble up Accelerate and City of Light late.

Gunnevera’s three 2018 TimeformUS Speed Figures are not inspiring, as his best number came when he earned a 125 for his closing second in the most recent Classic. However, Gunnevera does show a 129 for running second in the 2017 Travers Stakes (G1) and a 130 for his fifth-place finish in the 2017 Breeders’ Cup Classic.

If Gunnevera can cycle back to the 130, he is a contender.

There are a few key horses to consider for underneath slots in exotics, such as Dirt Mile third-place finisher Bravazo, who also seems to hang around for a share. His most recent start is a second-place finish in the Clark Handicap (G1) to Leofric.

Bravazo comes from the often criticized 3-year-old crop of last year. The group appeared to struggle against older horses later on in the last few months. Yet, Bravazo’s two on-the-board finishes to close out his campaign came against elders.

Bravazo's fellow Derby alumni Audible gives the Pegasus an attempt too after losing by half a length in the Harlan’s Holiday Stakes (G3) off the bench. Previously, he won the Holy Bull Stakes (G2) and Florida Derby (G1) in impressive efforts, before running third in the Kentucky Derby to eventual Triple Crown champion Justify.

When Audible returned in the Cherokee Run Stakes at Churchill in November, everything looked well as he circled the field to win. But in failing to catch Sir Anthony in the Harlan’s Holiday, the Todd Pletcher-trained colt turned off many believers.

With that said, Audible still has finished in the money eight times in eight tries, making him one of the most consistent Pegasus entries. While Bravazo and Audible are not serious win contenders, they both are capable of “clunking” into the picture late at value prices.

Finally, the 6-year-old Seeking the Soul gets the last mention from me. The great grandson of legendary Personal Ensign finished fifth in the Pegasus last year.

If there one major positive about Seeking the Soul, it is that he tries hard. He has hit the board in 17 out of 23 starts. Even though he disappointed backers in the recent Clark when running a flat third behind Leofric, he did finish second to City of Light in the Dirt Mile by less than three lengths and remains an exotics threat once again.

In two Pegasus World Cups, the “right” horse won. Arrogate and Gun Runner displayed the kind of monster speed figures in their past form necessary to succeed. In this edition, City of Light, Accelerate and Gunnevera are the three most capable horses this time around.

Underneath, almost every horse except Kukulkan is capable of picking up a piece, but Bravazo, Audible and Seeking the Soul rank slightly higher in my opinion.

Last year, a Gun Runner/West Coast/Gunnevera trifecta paid $55.50 for $1, which isn't too bad considering the popularity of the trio. Plans could change by race day, but I'm planning replace Gun Runner and West Coast with City of Light and Accelerate, and back wheel Gunnevera underneath.