Analysis: Which two Euros are best in the Belmont Derby? 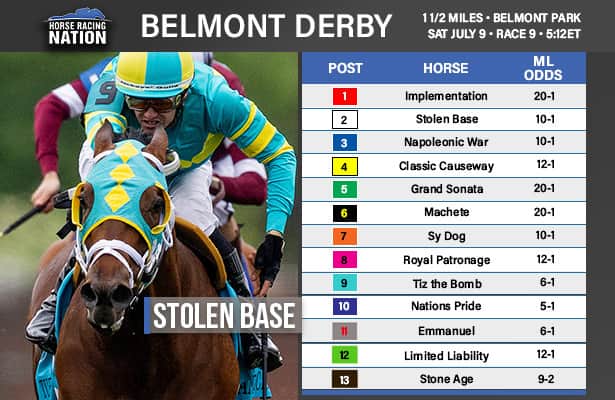 Five European invaders made the trip overseas for the Grade 1, $1 million Belmont Derby Invitational on Saturday at Belmont Park. Although American handicappers must work without the usual speed figures when analyzing Europeans, studying past replays and paying attention to class levels still help when separating the better Europeans.

Here are some thoughts on the two best European runners in this race and why they deserve the most respect of the five invaders.

When handicapping most high-level turf races in North America featuring European invaders, it is preferable to see the European excel on firm or good turf while showing he could compete with top horses.

Nations Pride arguably fits both categories in the Belmont Derby, even though exits a disappointing eighth-place finish in the Cazoo Derby (G1) on good turf. Perhaps Nations Pride threw a clunker on the wrong day.

Watch Nations Pride’s effort in the Newmarket Stakes on April 29. Once Nations Pride switched to his left lead, he exploded toward the finish to win by seven lengths over Hoo Ya Mal.

Before the Newmarket Stakes, Nations Pride had won three of four starts. But he had never crushed the field in that fashion.

Hoo Ya Mal went on to finish second in the Cazoo Derby after closing from the lower part of mid-pack, which makes Nations Pride’s eighth-place finish more puzzling. Nations Pride had lagged behind in roughly the same area and tipped outside with nothing else to offer late.

Nations Pride’s previous win over Hoo Ya Mal proves he can beat a good horse. Plus, Nations Pride’s two turf wins at Meydan and Newmarket both came on good turf, making him for suitable for American turf races. The weather forecast shows no significant rain.

With those points in mind, Nations Pride is either the best or second-best European in this race, depending on how Stone Age is viewed. Expect Nations Pride to bounce back after the disappointing Cazoo Derby.

Stone Age is the other standout European invader entered.

Although both Nations Pride and Stone Age were outrun in the Cazoo Derby, Stone Age ran slightly better in finishing sixth by 10 3/4 lengths after stalking the leaders. In contrast, Nations Pride finished eighth by 13 1/4 lengths.

Still, the two runners ended up only three lengths apart.

Before the Cazoo Derby, Stone Age easily won the Derby Trail (G3) by 5 1/2 lengths at Leopardstown. In March, Stone Age broke his maiden by an impressive nine lengths at Naval in Ireland. One knock against those two big-margin wins is that they both came over yielding turf.

But again, Stone Age’s Cazoo Derby effort is nothing to sneeze at. Finishing sixth by 10 3/4 lengths against a star such as Desert Crown could equal winning the Belmont Derby against a mix of Europeans and Americans, although the top American Tiz the Bomb is not a pushover.

In addition, Stone Age’s tactical speed shown in the Cazoo Derby could help him clear the field from the outside post and settle into a nice stalking position.

The wagering public might get too eager to bet Stone Age because of trainer Aidan O’Brien and the familiar team of owners surrounding him. Then again, Tiz the Bomb might take money and make the odds on the Europeans more attractive than usual. Watching the board is important.

In any case, give Nations Pride and Stone Age a long look when analyzing the race. Both of them are intriguing European entries with proven talent and experience running against the best in Europe.