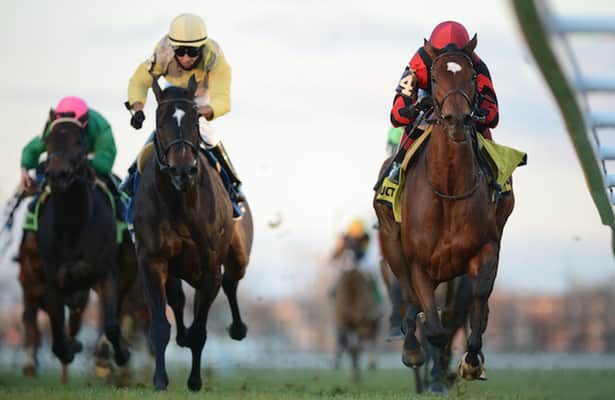 Plenty of value awaits bettors in the Grade 1, $600,000 E. P. Taylor Stakes on Sunday at Woodbine. Although the defending champion Etoile is a contender once again, she does not hold an advantage over the others. That makes this an attractive race to spend time on.

Etoile recently lost to a mare who meets her again. Mutamakina beat a closing Etoile in the Dance Smartly Stakes (G2) in August by half a length, and she faces Etoile and other formidable opponents in this stakes race.

After watching the Dance Smartly replay, there is reason to believe Mutamakina ran better than the half-length margin over Etoile suggests.

At first glance, the 50.32 half-mile and 1:14.07 six-furlong fraction give the impression of a slow pace. But sometimes the Woodbine course is tricky to assess. According to TimeformUS, the pace heated up to a red-labeled fraction when Mutamakina hit the one-mile point in 1:37.13.

Notice that Alnaseem and Mutamakina separated from the field on the far turn, which suggests that both runners were running fast.

At the peak point of separation on the turn, at least 3 1/2 lengths came between Mutamakina and Blame Debbie in third.

Mutamakina finally put Alnaseem away in the stretch, but now she needed to deal with the closers Etoile, Merveilleux and Court Return. When Etoile moved closer, Mutamakina retained an advantage until the wire to prevail by half a length. Merveilleux ran third by 3/4 of a length.

From a visual standpoint, Mutamakina worked harder than Etoile, Merveilleux and Court Return, even though she won by only a small margin. Yet Etoile is listed as the 5-2 favorite even after losing fair and square, while Mutamakina is an attractive 5-1.

Are Merveilleux or Court Return attractive at double-digit odds? Possibly.

But neither Merveilleux nor Court Return own any graded stakes wins. In contrast, Mutamakina shows a Grade 2 and Grade 3 win on this soil. In Europe, she also ran second in two Group 2 races in 2019, including a second-place finish to Sottsass in the 2019 Prix Niel (G2).

In his next start, Sottsass finished third in the 2019 Prix de l’Arc de Triomphe (G1). He also won the same race in the following year.

With her experience in mind, Mutamakina shows more class than Court Return or Merveilleux. She also offers more value than Etoile.

There are some fresh faces to the group, including the European invader Waliyak, La Dragontea and the Chad Brown-trained duo of Great Island and Kalifornia Queen.

In her most recent start, Waliyak took the Prix Bertrand de Tarragon (G3) by one length at Chantilly in France. Two starts ago, she was second by 2 1/4 lengths to Saffron Beach in the Atalanta Stakes (G3) at Sandown in England. In her next start, Saffron Beach went on to win the Kingdom of Bahrain Sun Chariot Stakes (G1).

The one concern is that Waliyak spent most of the year in one-mile races, although she did win the nine-furlong Prix Bertrand de Tarragon with no problem.

However, she had no punch while finishing fifth in the 1 1/4-mile John Musker Stakes last year. Her lone 1 1/4-mile win came that season in a handicap race, which is probably the talent equivalent of optional claiming races over here.

While Great Island gave a powerful rally when she took the nine-furlong Matchmaker Stakes (G3) at Monmouth, she could not sustain her move in the 1 3/8-mile Flower Bowl Stakes (G1) in September and fell 2 1/4 lengths behind War Like Goddess in the stretch rather than offer a serious challenge.

In fairness, War Like Goddess is in incredible form and perhaps Great Island became discouraged trying to chase an invincible runner.

She also failed to accelerate fast enough late in the Ballston Spa Stakes (G2) at Saratoga and settled for third by half a length behind Viadera.

With those finishes in mind, Kalifornia Queen looks more reliable for an underneath slot, if she is used. She needs some luck for the win spot.

La Dragontea won the local nine-furlong Canadian Stakes (G2) on Sept. 18. Her winning margin of one length over Court Margin seems mild, but she ran well enough to hold off her chasers late after tracking a slow pace in second early.

Joel Rosario hops aboard for trainer Christophe Clement. According to TimeformUS, Clement fares well at Woodbine with three wins in five starts over the past year. TimeformUS also gives the Rosario and Clement combination a perfect 94 rating with the “Hot” designation.

There is nothing major to knock about La Dragontea. From a visual standpoint, she did not give the same impression as Mutamakina in the Dance Smartly. La Dragontea never could separate from the pack.

For win bettors, Mutamakina is the best value when considering overall ability, class and the expected odds on the other fillies and mares.