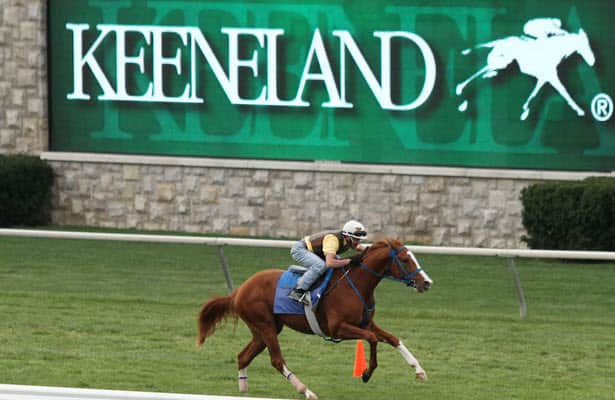 Given the 14 fillies and two also-eligible entries lined up in the Grade 2, $200,000 Jessamine Stakes at Keeneland on Wednesday, it might seem disappointing to see an analysis narrowed to the more obvious single-digit options. But sometimes overmatched horses compose the bulk of large fields.

Even if narrowing down the field results in horses with single-digit odds, bettors still can separate them enough to find value. In the Jessamine for 2-year-old fillies on turf, the three most probable winners appear to be Turnerloose, Misthaven and Dressed. None of those three win candidates holds a significantly better chance than the other two.

Is one of those fillies likely to get underlaid? Which filly offers the best value?

Turnerloose is listed at 5-2 on the morning line. She won her first two starts, including the one-mile Juvenile Fillies Stakes at Kentucky Downs by five lengths on Sept. 6, which makes her a solid contender without considering the odds or value. In most turf races, five lengths is a great margin because of the tendency for clustered finishes.

Bettors also get the combination of Florent Geroux and Brad Cox.

The Geroux-Cox combination works as a double-edged sword because some bettors like to blindly bet high-percentage jockeys and trainers, especially in turf racing. In addition, Turnerloose ran with a strange motion at times in the Kentucky Downs win. Her stride does not look as fluid or natural as others.

Maybe Turnerloose falls below 5-2 and becomes overbet. She is usable defensively in multi-race wagers, but others are preferable for a win bet.

The final win bet choice is a tough one between Misthaven and Dressed. Some bettors do not mind playing multiple horses in one race to win, although the goal of this post is to pick one filly for the final win bet.

Misthaven also exits a win at Kentucky Downs. On Sept. 5, she made a closing bid from eight lengths behind to break her maiden by 1 3/4 lengths in a six-and-a-half furlong race. The fact that Misthaven had to check early in the race makes the win more impressive, as trouble such as that can stop momentum and ultimately discourage a young horse.

Pedigree handicappers might remember her dam Celestial Woods, who produced $1.3 million earner Bobby’s Kitten and $1.06 million earner Camelot Kitten. Those two runners were sired by the great Kitten’s Joy. Misthaven is sired by Candy Ride, who is a fine route influence as well.

The jockey and trainer combination for Misthaven is Tyler Gaffalione and Joe Sharp. While Gaffalione is not known as a turf expert, he does win often.

Dressed won at Kentucky Downs in her most recent start too. On Sept. 12, she waited patiently on the inside and then made a strong closing move to break her maiden by 3 1/4 lengths in a six-and-a-half furlong race, just like Misthaven. From a visual standpoint, Dressed won easily, as Joel Rosario did not ask this talented filly for anything near the wire.

With that win, Dressed looks just as impressive as Turnerloose or Misthaven. In this race, turf riding expert Flavien Prat takes the call for trainer Wayne Catalano, and he is likely to give Dressed a great chance to win.

Why does Dressed lose jockey Joel Rosario? Rosario is listed on the Chad Brown-trained Haughty, who is the second also-eligible entry. Haughty crossed the wire first by 3 1/4 lengths in her career debut on Sept. 17 at Belmont under Rosario, but she lost via disqualification.

Perhaps Rosario sees more in Haughty, or he wants to stay in line to ride future mounts for Brown. Either way, Haughty is yet another contender to consider if she draws in. But she is compromised by a wide post.

In any case, on turf, it is not a downgrade to go from Rosario to Prat.

Because Dressed almost certainly offers higher odds than Turnerloose and has a better turf jockey than Misthaven, she is the top selection by a narrow margin. At 4-1 or higher, Dressed is also the right win or win/place bet.

Otherwise, use Turnerloose, Misthaven and Dressed in multi-race wagers and move on. One of those impressive last-out winners figures to win here.