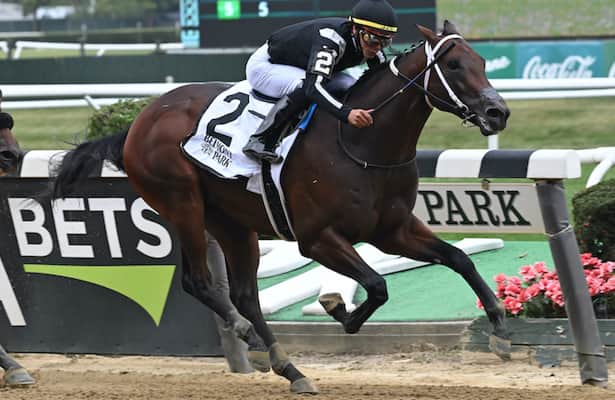 Horse players who prefer dirt racing get an early Christmas, as Oaklawn Park starts its traditional winter/spring meet on Friday with a nine-race card featuring the $150,000 Advent Stakes for 2-year-old sprinters.

Value players will enjoy the Advent Stakes because it contains a vulnerable 5-2 favorite, Cairama, and two viable alternatives for the win.

The first topic to address is why Cairama looks vulnerable. This son of Cairo Prince shows no real advantage on TimeformUS and also did no running in the Nashua Stakes (G3), his lone stakes attempt.

In Cairama’s career debut at Belmont on Sept. 17, he broke his maiden in gate-to-wire fashion by a head with only an 83 on TimeformUS. In addition, the red color over the class rating indicates a speed-biased dirt course. In fairness, handicappers should not nitpick over a low figure in a career debut since young horses use it as a learning experience.

Cairama made his second start in the Nashua while stretching out to one mile. After bumping at the start, Cairama trailed the field through the opening quarter and then moved into fifth when Speaking folded to last. After moving into fifth, Cairama stayed in that position until the wire.

Even with the early bump, it is disappointing that Cairama never became a real factor at any point. He moved within three lengths of the lead on the turn and tipped out for a clear run, but he failed to move forward and ended up losing ground while finishing 9 1/4 lengths behind.

For the fifth-place effort, Cairama earned an 89 on TimeformUS.

One viable alternative is Higher Standard. This promising colt shows only one race, but he already beat Cairama’s career high of 89. The son of Into Mischief broke his maiden in a Churchill Downs maiden race on Nov. 14 by 5 3/4 lengths with an impressive 96 TimeformUS Speed Figure. He is liable to improve as a horse making his second start.

To add some caution, though, Higher Standard beat a questionable field in his debut win. The fourth-place Atras went on to finish a mild fourth in a $150k maiden claiming race at Churchill Downs on Nov. 24. And the jump from a maiden race to stakes company is not easy.

Higher Standard starts at 3-1 on the morning line, which is not a bad deal considering he owns a better speed figure than the 5-2 Cairama.

Bettors might find an even better deal in the 6-1 B Sudd, who makes his third career start for trainer Dallas Stewart after breaking his maiden at Churchill Downs by a neck on Oct. 31. He ran better than the margin indicates.

In that Oct. 31 maiden race, Unpredictable Bay held the lead heading into the turn, but B Sudd made a three-wide move to challenge the pacesetter.

As the two horses separated from the field, B Sudd took a small advantage in mid-stretch, although Unpredictable Bay kept fighting and never gave up. Under urging from Brian Hernandez Jr., B Sudd held the margin and won by a neck over Unpredictable Bay, with another six lengths to Wolfe County in third.

B Sudd earned a field-high 100 TimeformUS Speed Figure for the win. To back up the figure, Unpredictable Bay went on to break his maiden by 9 1/4 lengths on Nov. 27 at Churchill with a 105 on TimeformUS.

If anything, B Sudd benefited from the tough stretch battle. Given he went slightly wide on the turn, the fact he sustained the bid is notable.

Plus, B Sudd is an attractive 6-1 on the morning line. If the 6-1 odds hold up, there is every reason to favor him rather than Cairama.

In terms of B Sudd versus Higher Standard, B Sudd is preferable because he owns the top TimeformUS Speed Figure and an extra race in his record to give him an experience edge. Higher Standard has started only once.

To sum up this analysis, B Sudd is a good win and place bet at 6-1 and remains acceptable at 4-1 or higher.

Multi-race wager bettors will want to use B Sudd and Higher Standard.