Analysis: Use these 2 horses under Maxfield in Stephen Foster 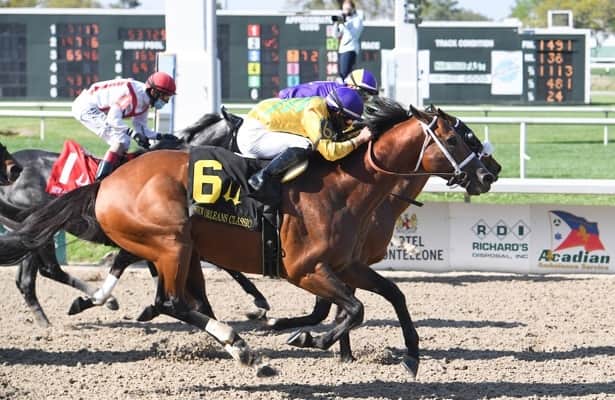 Photo: Parker Waters/Eclipse Sportswire
For most of this blog's existence, the goal has been to beat the heavy favorite in graded stakes races when the low odds do not match the actual ability relative to the field. In the case of star entrant Maxfield in the Grade 2, $600,000 Stephen Foster Stakes on Saturday at Churchill Downs though, there is almost no chance he can lose against this group.
Click here for Churchill Downs Entries, Results.

Maxfield owns six wins from seven starts, although his career has been riddled with physical problems. After Maxfield won the Breeders’ Futurity (G1) in October 2019, he did not race again until the following May in the local 2020 Matt Winn Stakes (G3).

Although Maxfield made a successful return in the Matt Winn, he then took another layoff and did not return until December in the Tenacious Stakes.

Since winning the Tenacious at Fair Grounds, Maxfield has been on a regular schedule. In his second start off the layoff, Maxfield won the Mineshaft Stakes (G3) on the same course before shipping west for a third-place finish in the Santa Anita Handicap (G1) and then returning to Churchill Downs to win the Alysheba Stakes (G2) on the cutback.

In that stretch of races, Maxfield turned in steady TimeformUS Speed Figures of 120, 122, 123 and 122. Even though a couple of other horses in the field can reach 120 once in a while, Maxfield looks like the only one that can hit 120 or more regularly. His odds match his ability here.

As tough as it is to choose the heavy favorite, Maxfield is the pick.

Now to select two underneath options.

With Sprawl, Warrior’s Charge and Visitant present and all possessing early speed, there is enough pace in the race to give closers a fair chance to hit the board.

One interesting closer is the rail entry Chess Chief, who was third in the Alysheba and 7 1/2 lengths behind Maxfield with a 113 TimeformUS Speed Figure.

Two starts ago, Chess Chief won the nine-furlong New Orleans Classic (G2) at Fair Grounds by a head with a 118 on TimeformUS, his best speed figure since 2019. Before that effort, Chess Chief also ran a closing third in the Mineshaft Stakes, only 3 1/4 lengths behind Maxfield with a 117 on TimeformUS.

Chess Chief is no standout on form, but with the right trip, he can pass enough horses for a second or third. The nine-furlong distance suits him.

Another interesting closer is South Bend, who had traffic problems in the Blame Stakes last month. In April, he won his return race at Keeneland with a 114 on TimeformUS.

In the Blame, South Bend ran on the inside for most of the race. On the far turn, jockey Tyler Gaffalione tried and failed to fit through an opening in the middle part of the field.

South Bend is left with no path and no momentum.

At the end, South Bend still finishes fifth by 3 3/4 lengths with a 109 on TimeformUS – not terrible, considering he did not get a fair shot.

South Bend had shown promise in his career by winning the 2019 Street Sense Stakes as a 2-year-old. Last year, he did not capture a single race, but the close second by 3/4 of a length in the Ohio Derby (G3) and fourth in the Travers Stakes (G1) at Saratoga are both notable efforts. Forget about his Kentucky Derby flop.

Right now, South Bend needs to improve to beat Maxfield. With his best effort, though, he can pick off the other horses and nab second in mid-stretch. Because South Bend was fifth in the Blame, bettors might even receive value on him as an underneath exacta or trifecta option.

Maxfield does not give the impression of a superhorse, at least not yet. But he is a step above this field. If the race must be played vertically, then Maxfield over Chess Chief and/or South Bend is the bet. Watch the tote board and make sure it is worth the money to include one or both underneath. Otherwise, single Maxfield in multi-race wagers with confidence.