Analysis: Use these 3 runners in the Cigar Mile 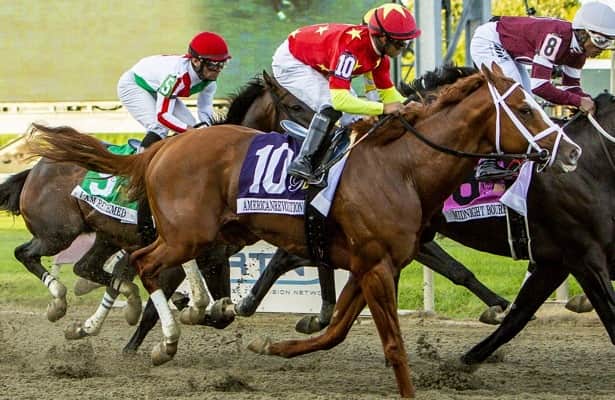 After taking more time to handicap the Grade 1, $750,000 Cigar Mile at Aqueduct on Saturday, selecting multiple horses for horizontal wagers seems more logical than pinpointing one horse. The featured race contains three interesting options for the win spot, and one is a long shot.

The most likely winner is the rising Americanrevolution. The Todd Pletcher-trained colt brings a great win record to Aqueduct and evidence of being able to run with Grade 1 company.

Americanrevolution owns four wins out of six career starts, with one of those two losses coming in his career debut at Keeneland. In that first race, Americanrevolution hopped at the start and worked his way to fourth while losing by four lengths to eventual Derby runner-up Mandaloun.

The other loss came a few months ago in the Pennsylvania Derby (G1) against big 3-year-old names in Hot Rod Charlie and Midnight Bourbon.

For the early stages of the Pennsylvania Derby, Americanrevolution went along with the front group, including Hot Rod Charlie, Midnight Bourbon and Weyburn, by traveling in a good stalking position behind them.

Americanrevolution inherited third when Weyburn folded, although he could not keep up with Hot Rod Charlie and Midnight Bourbon on the final turn.

To Americanrevolution’s credit, he finished third in his Grade 1 debut.

Americanrevolution also beat decent runners in that race, such as Fulsome, Bourbonic, Speaker’s Corner and Weyburn. Speaker’s Corner went on to crush an optional claiming race at Belmont by 6 3/4 lengths before losing by half a length to Miles D in the local Discovery Stakes.

In Americanrevolution’s most recent start, he dominated older New York-bred runners by 11 3/4 lengths in the Empire Classic Handicap at Belmont.

If Americanrevolution can handle the cutback to one mile after three straight nine-furlong races, then he can win his second Grade 1 attempt.

Another win candidate is Independence Hall. This 4-year-old colt likes Aqueduct and brings good form with a recent graded-stakes win.

Earlier in his career, Independence Hall crushed his opponents by 12 1/4 lengths in the 2019 Nashua Stakes (G3) on this course. He gave the impression of a monster and instantly became one of the major players on the Derby trail.

When Independence Hall made his 2020 debut on the same course in the Jerome Stakes, he won by only four lengths against a weak field. Regardless, those two races make him 2-for-2 at Aqueduct. Both of those wins came in one-mile races, the same distance as this race.

Independence Hall did not pan out as a monster. In more recent times, though, he did win the Fayette Stakes (G2) at Keeneland by 7 1/4 lengths after repelling Code of Honor early in the stretch and pulling away. In fairness, he also benefited from a slow pace as the early pacesetter.

He also lost six races in a row before the Fayette. Some of those losing efforts were not terrible. For example, Independence Hall ran third in the Pegasus World Cup (G1) and second in the Lukas Classic (G3). In both cases, the eventual Breeders’ Cup Classic champion Knicks Go won.

Although he is unreliable at times, Independence Hall can win.

As for the long shot option, that horse is Pipeline.

Pipeline exits a third-place finish in the Perryville Stakes at Keeneland. He broke his maiden by 3 1/4 lengths at Saratoga in September and finished second in another Saratoga maiden race in July to a nine-furlong specialist in Vindictive at nine furlongs.

The Perryville loss is excusable. Pipeline made a move into the teeth of a fast pace, and the early move took something out of him before turning for home. With the effects of the pace, it was understandable to see him fade slightly to third as two closers went by him in the stretch run.

Two starts ago in Pipeline’s maiden win, he beat a horse with a possible future in Cody’s Wish, who finished a closing third in the same race. Since losing to Pipeline, Cody’s Wish has posted three straight wins at Churchill Downs, including his maiden breaker on Oct. 2 and two allowance race wins in the November meet.

Although the jump in class from the Perryville is a tall order, trainer Chad Brown must see something in Pipeline to believe he can perform well in this group. Pipeline's stablemate Miles D had only two maiden races on record before running second in the Curlin Stakes and third in the Travers Stakes (G1). If Brown thinks Pipeline belongs here, his opinion must be respected.

Pipeline also figures to settle into a perfect outside stalking position.

To round this up, Americanrevolution looks poised to break out as a top dirt router. But the race is not a lock for him. Independence Hall loves this course, and Pipeline is capable of upsetting this field with one step forward.

All three runners are usable in multi-race wagers.