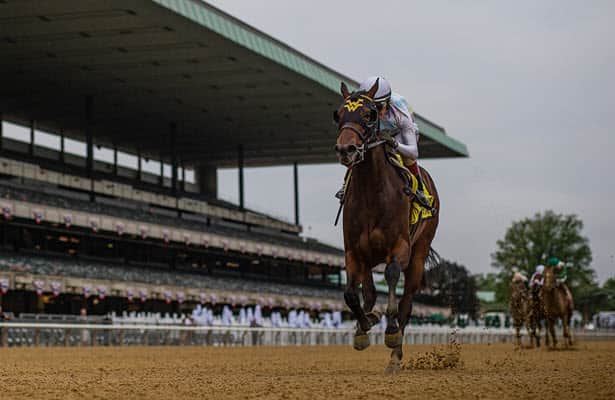 Keeneland opens its traditional spring meet on Friday with a 10-race card featuring the Grade 1, $600,000 Ashland Stakes at Keeneland. Handicapping this race – a 100-40-20-10-point qualifier for the Kentucky Oaks – has not been an easy task. It features at least four talented fillies on paper, but here are some final picks and thoughts.

The best filly to play looks like Interstatedaydream, who makes her fourth career start for sharp trainer Brad Cox.

Interstatedaydream broke her maiden at first asking last June at Belmont. A little more than a month later, she tried stakes company at Saratoga and made a nice closing move to finish second in the Adirondack Stakes (G2).

In terms of speed figures, those initial two starts seem kind of slow. She was only a developing 2-year-old filly, though, and went on the shelf after the stakes try.

Interstatedaydream came back last month in an Oaklawn optional claimer. She won by an easy 8 1/4 lengths over a weak field. Even though she ran against weak opponents, the final time of 1:43.31 went faster than the optional claimer for older males won by Market Analysis in 1:43.39 later on the card.

With that said, maybe Happy Soul can slip clear early for trainer Wesley Ward if the rest of the field is not careful. No one other filly in this race owns this filly’s kind of speed.

Happy Soul broke her maiden last May at Belmont by 11 3/4 lengths in a five-furlong sprint. She then won the Astoria Stakes at 5 1/2 furlongs by 11 1/2 lengths. For some reason, she went on the shelf after those big-margin wins early in her career.

In mid-February, Happy Soul returned in the six-furlong Dixie Bell Stakes at Oaklawn and won by three lengths with a career-high 112 on TimeformUS.

The 112 gives Happy Soul the co-highest figure with Awake at Midnyte, who ran a 112 when finishing second in the Santa Ynez Stakes (G2) in January.

Even with all those sprint wins, Happy Soul does show route influences in her pedigree. She is a half-sister to Calgary Caper, who won the BC Premier’s Handicap at Hastings in 2018 at the 1 3/8-mile distance. Plus, the damsire Stephen Got Even won the 2000 Donn Handicap (G1) to end his successful career. He is a son of route influence A. P. Indy.

Interstatedaydream still holds a slight edge because of her proven route experience. But Happy Soul enters this race with a shot to steal it too.

Now to discuss the fillies not being chosen on top.

Awake at Midnyte finished a disappointing third in the Rachel Alexandra Stakes (G2) at Fair Grounds. She could rebound here, but notice the slow final time of the race. Turnerloose crossed the wire first in 1:44.22.

Turnerloose’s time was more than two seconds slower than Olympiad’s impressive 1:42.01 for winning the Mineshaft Stakes (G3) and more than a second slower than Cyberknife’s optional claiming win in 1:42.53 earlier in the card.

Although Awake at Midnyte earned a 112 on TimeformUS for winning the Santa Ynez Stakes (G3) at seven furlongs, the number looks like an anomaly now. Perhaps she needs a sprint distance to fire her best.

As for Nest, this is a full sister to Idol, the winner of the Santa Anita Handicap (G1) last year. Nest runs like she wants 1 1/4 miles too.

Notice how Nest won the nine-furlong Demoiselle Stakes (G2) by grinding it out in the stretch run over a tired Magic Circle and Venti Valentine. Nest cut back and won the Suncoast Stakes, but she also was facing a weaker field at Tampa Bay Downs.

Remember that Keeneland uses a short stretch for 1 1/16-mile races. Visually, Nest gives the impression she wants a long stretch.

The Ashland does not look like a great race to make a vertical wager or win bet. But keep an eye on Interstatedaydream and Happy Soul’s odds see whether the public dismisses one or both of their chances.

Otherwise, just use both of them in multi-race wagers and move on.