Analysis: Use this Santa Maria Stakes longshot with Ce Ce 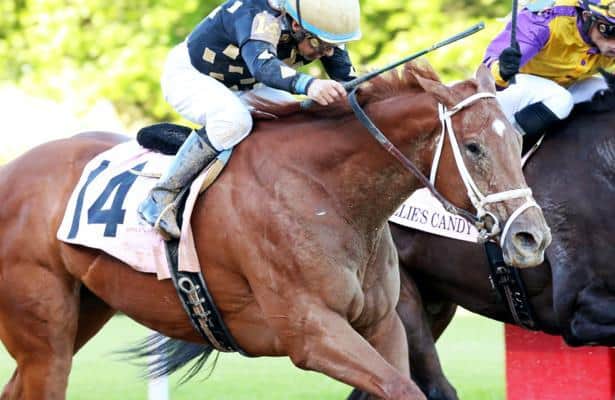 Ce Ce goes will take aim at her third straight graded stakes victory in Sunday's Grade 2, $200,000 Santa Maria Stakes at Santa Anita Park in a race containing other fillies and mares she defeated in recent starts such as Hard Not to Love, Horologist and Kaydetre. The race also includes Fighting Mad, who figures to set the pace in her first 1 1/16-mile attempt.

Based on Ce Ce's last three starts and the familiar names she's in against, this sharp 4-year-old filly deserves her 3/5 morning line odds. But another option is viable, and I'll get to her after discussing the favorite.

Off a 264-day layoff, Ce Ce returned in excellent form when she took a local allowance optional claimer on Feb. 17 under a hand ride.

Ce Ce built upon that race in the Beholder Mile (G1). In this start, she went four wide on the first turn. But losing ground did not bother her, as she chased the uncontested leader Hard Not to Love in third before taking over at the top of the stretch and drawing clear. Ce Ce won by 3 ¼ lengths over a tired Hard Not to Love with Ollie's Candy in third.

For the win, Ce Ce earned a career-high 118 TimeformUS Speed Figure, adjusted up from a 114. Ce Ce's momentum did not stop there.

Ce Ce then traveled to Oaklawn Park for the Apple Blossom Handicap (G1). In this race, Ollie's Candy surprisingly secured the lead over Cookie Dough and Serengeti Empress on the first turn through a fast pace.

As Ce Ce made her move on the far turn, Ollie's Candy put away the other speed horses. Despite flashing early speed, Ollie's Candy also fought back against Ce Ce and initially kept Ce Ce at bay in midstretch.

Ce Ce responded to encouragement though and prevailed by a head. For the hard-fought victory, Ce Ce earned another career-high TimeformUS figure of 121.

Expect Ce Ce to fire another big race for trainer Michael McCarthy. She will start at less than even money in a short field, but in this case, the low odds are justified.

For bettors wanting another option or a horse to bet against the bridge jumpers, one other filly to consider is Horologist.

Horologist only managed to close for sixth in the Apple Blossom, five lengths behind Ce Ce. But take another look at the replay, especially on the far turn as Horologist experienced major traffic problems when moving.

Due to traffic, Horologist went from 2 ¾ lengths behind to 10 lengths back in the early part of the stretch. When a path finally opened up, Horologist managed to cut back into the margin, losing by five lengths in the end.

Two starts ago, Horologist turned in a good effort in the Nellie Morse Stakes at Laurel Park. She fought gamely against Arrifana in the stretch, only losing by a nose to a decent filly. Prior to that race, Arrifana ran second in the Comely Stakes (G3) at Aqueduct.

For the runner-up effort, Horologist earned a 121 TimeformUS Speed Figure, which is on par with Ce Ce. As a fair warning, Laurel figures do not always translate well.

Regardless, bettors wishing to take a shot on Horologist will receive value. She is 8-1 on the morning line, and those odds may hold up.

Why not Hard Not to Love? Before giving up the lead to Ce Ce in the Beholder Mile, Hard Not to Love competed in six straight sprint races. Why would trainer John Shirreffs start this filly in six sprint races before going longer if he thought she could route effectively?

Fighting Mad also looks like a sprinter despite winning the one-mile Torrey Pines Stakes (G3) at Del Mar. Because Bob Baffert trains, Fighting Mad will also attract extra betting money. While Fighting Mad could enjoy an uncontested lead, she is still questionable in the stretch.

On paper, Ce Ce is clearly the best horse in the Beholder Mile. This filly's combination of class and tactical speed make her a top contender in every top stakes race, let alone a Grade 2. Given Horologist's traffic problems in the Apple Blossom, though, give her a second glance. If Ce Ce fails to fire for any reason, Horologist has a chance to win.