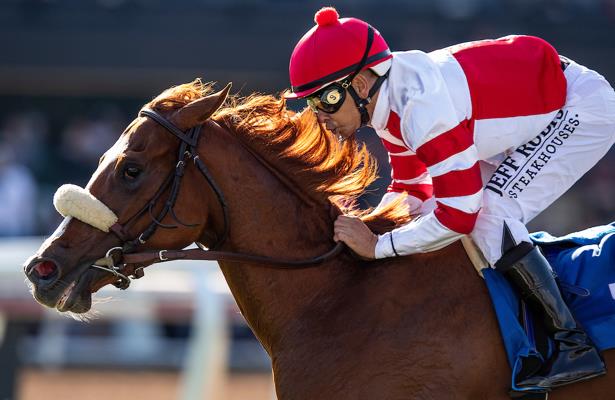 Given the undefeated record and obvious talent of Buena Vista Stakes (G2) favorite Jolie Olimpica, who returns Saturday at Santa Anita Park on Saturday, this is a challenging betting race.

The Brazilian 4-year-old filly is coming off a visually striking win in the Las Cienegas Stakes (G3), her first start in the U.S. for trainer Richard Mandella, and is likely to go off at even money or less off that impressive effort.

Jolie Olimpica only won the 5 ½-furlong turf race by 1 ¼ lengths, but turf sprint margins are compressed. In other words, she dominated.

Jolie Olimpica broke well without immediately gunning to the lead. Instead, she allowed Kentan Road to dictate the pace early by 1 ½ lengths.

On the turn, Kentan Road retained the one-length advantage. But Mike Smith had not asked Jolie Olimpica yet. He waited until they hit the top of the stretch before nudging. Once Smith started asking with his right hand, Jolie Olimpica responded with authority over a hard-ridden Kentan Road.

Jolie Olimpica earned a 113 TimeformUS Speed Figure, a type of number most of her Buena Vista rivals are capable of matching or passing 113. But Jolie Olimpica accomplished that off 216-day layoff, and sometime between she had to acclimate from her home in Brazil to the U.S.

The stretch out in distance to Saturday's 1- mile trip is not a concern, as Jolie Olimpica previously won the Grande Premio Jockey Club Brasileiro (G1) by six lengths going the same trip.

She drew away in the stretch under some right-handed urging.

Jolie Olimpica also won her other two starts by 3 ¼ lengths and 4 ¼ lengths. It is clear this filly loves to win, and she brought that drive -- along with class -- to America.

According to TimeformUS' Pace Projector, Jolie Olimpica is in for a fight in terms of the early going. The algorithms place her tied for first early.

However, the projector cannot factor in South American races. Jolie Olimpica could go to the front on the heels of her last-out victory sprinting, but the more likely scenario is that she breaks well from the rail and settles into the pocket position behind Brill. From there, she needs to wait patiently on the backside and find a way to tip out.

If she gets the opening, expect Jolie Olimpica to overpower the field late.

Even though Jolie Olimpica is the best horse, it is possible a bad trip stops her. That's always a reality in turf racing, so bettors would benefit from using at least one other option in a large field.

If seeking a "B" horse, then Lady Prancealot is the right filly to trust. Toss out the flop in the Jockey Club Oaks Invitational last summer at Belmont Park. Minus that race, Lady Prancealot has turned into a closing machine lately.

Two months ago, Lady Prancealot closed to win the local 1 ¼-mile American Oaks (G1) off a slow pace. She also took the Valley View Stakes (G3) at Keeneland by ¾ of a length in October. Back in August, she finished a good third in the Del Mar Oaks (G1) to Cambier Parc and Hidden Message.

Granted, those races were longer than one mile. Lady Prancealot's record at this distance is only 6: 1-3-0. But she gets the benefit of the doubt, as most of Lady Prancealot's one-mile races came in 2018 as a 2-year-old filly.

If the red-coded TimeformUS Pace Projector is correct, then Lady Prancealot figures to get the right setup in the Buena Vista.

Which other closer is worth a shot? Tiny Tina deserves a mention, as in the Robert J. Frankel Stakes (G3) two months ago, she closed for second by a nose to Mirth, who previously won the Rodeo Drive Stakes (G1). Drawing Post 12 in a two-turn mile race hurts her case, though.

As for the mid-pack runner Carressa, she required an all-out effort to defeat Super Patriot and La Sardane in the Megahertz Stakes (G3).

Jolie Olimpica is the right horse, despite her low odds, followed by Lady Prancealot. Remember: Finding value is not only about taking a big longshot. Rather, bettors weigh the odds in relation to the horse's actual ability.

In this case, even money on Jolie Olimpica is a fair price to swallow. This could be a star filly.