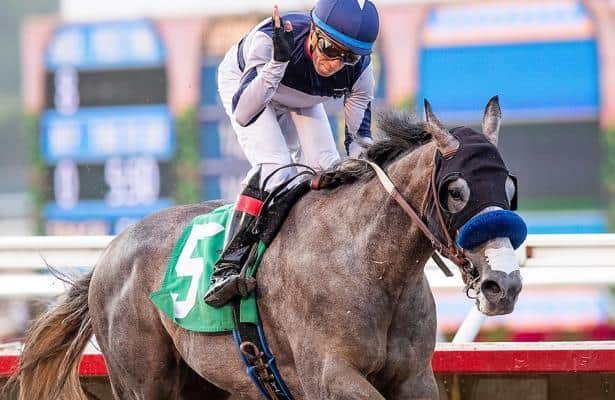 Even though the heavy favorite Brickyard Ride looks tough to beat in the Grade 2, $200,000 Triple Bend Stakes at Santa Anita on Sunday, there is some room for an upset. One interesting alternative is a runner who has been spotted poorly in his last three starts and now returns to a sprint.

If American Theorem stays around his morning line odds of 8-1, he deserves a closer look on the cutback after repeatedly fading at longer distances against quality competition. His lack of stamina has been shown over his past three starts in the San Pasqual Stakes (G2), Santa Anita Handicap (G1) and Kentucky Cup Classic Stakes at Turfway Park.

In the San Pasqual, American Theorem had some initial traffic problems around the first turn and had to check as four different horses went for the lead. He then tried to stalk before fading to sixth and last by 13 1/4 lengths.

One month later in the 1 1/4-mile Santa Anita Handicap, American Theorem set a pressured pace before fading to sixth again by 24 lengths. Not only did the pressure get to him, but the distance proved too far.

As for his effort in the Kentucky Cup Classic, American Theorem ran in midpack for most of the race before fading to ninth by 12 3/4 lengths. In all likelihood, American Theorem did not enjoy the synthetic surface or the nine furlongs, which means handicappers can cross the race out.

Now American Theorem starts in a seven-furlong stakes race that lacks real monsters, unless the speedy Brickyard Ride is considered one.

The last time American Theorem competed in a sprint race came last year on Dec. 11 at Los Alamitos in a six-furlong optional claimer. American Theorem finished second by two lengths to a Bob Baffert-trained runner named Essential Wager, who won the Palos Verdes Stakes (G3) in his next start.

Another notable local sprint effort from American Theorem came over a year ago in a seven-furlong optional claiming race. In that race, American Theorem finished second, but he also had to chase a fast pace early before taking the lead. The winner Exaulted took advantage with the last move.

In that race, American Theorem earned a 111 TimeformUS Speed Figure, which again is competitive against horses in this race not named Brickyard Ride.

Brickyard Ride probably needs to throw a clunker for American Theorem to win. Turning in a bad race is not impossible though. Last August, Brickyard Ride faded to last by 21 1/4 lengths in the Pat O’Brien Stakes (G2) at Del Mar. But that kind of clunker did not only happen in graded stakes races. He also faded to last by 15 lengths in a local Cal-bred allowance race last May.

Those playing multi-race wagers need to use Brickyard Ride along with American Theorem. Otherwise, a win/place bet is logical on American Theorem as long as he stays at his morning line odds of 8-1 or higher.