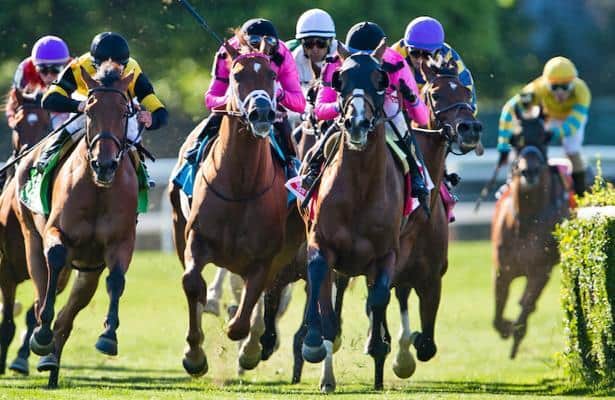 With two quality Chad Brown-trained runners in Rougir and Lemista entered in the Grade 3, $150,000 Beaugay Stakes (G3) at Belmont on Saturday, the race might seem chalky at first glance. But, there is room for an upset.

Bettors should also pay attention to Stolen Holiday, who exits a troubled runner-up finish in the Sand Springs Stakes at Gulfstream last month. In Stolen Holiday’s other start this year, she also won a Feb. 23 allowance race at Tampa Bay Downs by 6 1/4 lengths off a three-month layoff.

The trouble for Stolen Holiday in the Sand Springs started on the far turn when Javier Castellano failed to find any room inside. Instead, Stolen Holiday ended up bumping with the longshot Designed by Kitten.

Then in the early part of the stretch, Stolen Holiday still could not move forward because Grand Ave Girl and Sugar Fix made the gap too tight.

Forget about Stolen Holiday’s sprint efforts last year. This is a half-sister to Eishin Apollon, who won $3.5 million while based in Japan, and Master of Hounds, a $1.2 million earner who competed in 16 route races out of 20 lifetime starts. Racing fans in America might remember Master of Hounds as the fifth-place finisher in the 2011 Kentucky Derby.

Given those siblings, Stolen Holiday has mostly route blood.

Stolen Holiday is worth playing at her morning line odds of 8-1. If she falls to 5-1, those odds are still acceptable. Just make sure to demand value, as the two Chad Brown stablemates do own better credentials.

The favorite Rougir could only finish seventh in the Breeders’ Cup Filly & Mare Turf last November, but she did suffer from minor traffic problems.

Last August in Europe, Rougir finished fourth by a head in the Prix Rothschild (G1). Note the third-place Speak of the Devil, who dominated the Distaff Turf Mile (G2) by 2 3/4 lengths last weekend at Churchill Downs. One month after the Prix Rothschild, Rougir captured the Prix de l’Opera Longines (G1) for her lone win of the season.

If Rougir finds her European form this week in the Beaugay, she will prove tough to beat against this Grade 3 field. But Rougir's low odds off a bad race in the Breeders’ Cup Filly & Mare Turf make her unattractive in terms of value.

Lemista finished second by half a length in this race last year to Harvey’s Lil Goil. Two months later, she failed to put forth any effort while running a disappointing eighth in the Diana Stakes (G1) at Saratoga. In August though, Lemista improved and closed mildly for third in the Beverly D Stakes (G1) at Arlington before hitting the shelf.

Overall, Lemista is not as talented as Rougir. Regardless, Irad Ortiz Jr. hops on board for Brown, and that combination is hard to ignore.

Stolen Holiday is the selection though based on potential and value. The public likes trainer Shug McGaughey, but they may ignore this 5-year-old mare because of the two talented Chad Brown entries to her left.

At 5-1 or higher Stolen Holiday is a good win bet, or win and place.

In the Peter Pan (G3), Golden Glider is also a good option to connect with Stolen Holiday in a double. If playing this way, use a win bet on Golden Glider to back up the wager.

Play Golden Glider to win too.