Analysis: Uni an unavoidable pick in Just a Game Stakes 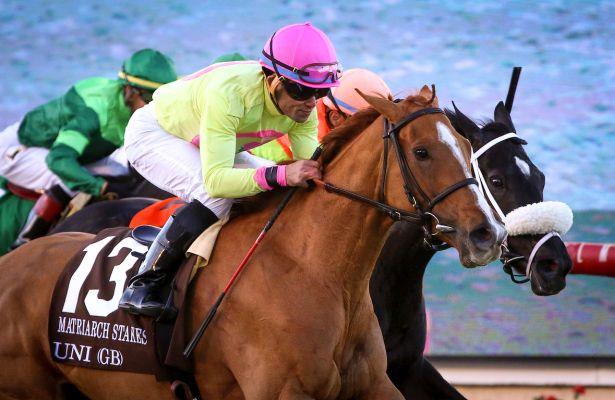 Not every race is worth tossing out the heavy favorite. For example, in the Grade 1, $250,000 Just a Game Stakes at Belmont Park on Saturday, Uni projects to start at low odds as she makes her season debut after a 238-day layoff. But not only does Uni own the record to back up the odds, she also gets a moderate to fast pace on paper.

For most racing fans, Uni needs no introduction. After transferring to North America into trainer Chad Brown’s barn, Uni won only one stakes race in four 2017 tries on North American soil. But she did finish third in the Belmont Oaks (G1) and fourth in the Queen Elizabeth II Challenge Cup (G1), hinting at better races to come.

In 2018, this mare moved forward with four wins in four starts, topped off by a closing victory in the Matriarch Stakes (G1) at Del Mar from 19 lengths back.

In her second start, Uni closed for third in the Fourstardave Handicap (G1), only 2 1/2 lengths behind a sharp winner in Got Stormy. Two months later, she closed to capture the First Lady Stakes (G1) at Keeneland by 2 1/2 lengths.

Uni then turned the tables on Got Stormy in the Breeders’ Cup Mile.

Although Uni did receive nice pace setup by El Tormenta and Hey Gaman, she moved into the lead at the same time as Got Stormy.

At the midstretch point, Got Stormy briefly put her head in front. Uni had Got Stormy measured, though, and gained the advantage late to win by 1 1/2 lengths in a thrilling finish for racing fans who love watching female horses defeat males.

Uni earned a career-high 126 TimeformUS Speed Figure, and later won the Eclipse Award for Female Turf Horse thanks to that Breeders’ Cup Mile.

In this return spot, Uni is supposed to receive some pace, especially with her speedy stablemate Newspaperofrecord entered too.

Newspaperofrecord figures to contest the pace with Valedictorian. Either she contests the pace with the other main speed, or she will need to use up excess energy in order to clear Valedictorian in the initial stages. Right behind those two speed runners is Got Stormy, who always sits close.

The pace might not resemble the one in the Breeders’ Cup Mile, but it all depends on how fast Newspaperofrecord and Valedictorian go.

Regardless, the average seven-horse field is supposed to help Uni get a clear shot as well. Smaller fields result in less traffic for closers.

Despite low odds, Uni is the main choice.

As a 2-year-old filly, Newspaperofrecord used speed to crush opponents in the Breeders’ Cup Juvenile Turf Fillies, winning by 6 3/4 lengths to capp off a perfect 3 for 3 season. At that time, she caught undeveloped fillies off guard with that kind of blazing speed and took advantage.

The following season, Newspaperofrecord tried the same front-running tactics in the Edgewood Stakes (G3) and Wonder Again Stakes (G3). But this time she hit a wall in both route starts, fading to second against Concrete Rose and Cambier Parc, respectively, in those two races.

Then in the 1 1/4-mile Belmont Oaks Invitational, Irad Ortiz Jr. wanted to try different tactics by rating Newspaperofrecord. She rejected the strategy though and visibly fought Ortiz’s hold by tossing her head.

Cross the Belmont Oaks effort out.

Newspaperofrecord’s two runner-up finishes in 2019 were creditable, while the flop in the Belmont Oaks came as a result of rating.

In her return race, Newspaperofrecord cut back in the Intercontinental Stakes (G3) to seven furlongs and ran freely on the lead. Subsequently, she won by four lengths over Regal Glory and stirred up hype again.

One question is whether Newspaperofrecord needs wet turf for her best shot, as all four of her wins came on a yielding surface. But regardless of whether it rains, she is a major contender. In today’s turf racing, it is never a surprise if the other speed horses let the main speed go.

For those who do not wish to play a low-priced Chad Brown-trained entry, there is an argument Beau Recall could move forward as well.

Beau Recall disappointed with a ninth-place finish in the Mint Julep Stakes (G3). But she came off a 245-day layoff and perhaps was not tuned up.

Last May, Beau Recall won the Distaff Turf Mile (G2) over Got Stormy. She also took the Yellow Ribbon Stakes (G2) in August. On her best day, this 6-year-old mare is capable of competing with good horses.

The Chad Brown-trained Regal Glory makes the second start of this campaign too. While Regal Glory proved no match for Newspaperofrecord in the Intercontinental, she gets more distance in this spot and may benefit from a fast pace, as Uni will.

For a Brown horse, Regal Glory might offer some value.

As for Got Stormy, she shows two subpar races this season, including a fourth-place finish the Endeavour Stakes (G3) and a fourth in the Beaugay Stakes (G3). In the latter race, she faded sixth lengths behind.

It is notable that the Endeavour and Beaugay are both 1 1/16-mile races, though, and Got Stormy’s best effort this season came while runner-up in the Frank E. Kilroe Mile (G1) against males at Santa Anita. But even on that race alone, she seemed a touch better last year.

Uni is the best horse in the race. On paper she will receive enough pace to set up her late punch. If she does not, then her stablemate Newspaperofrecord becomes the likely winner on the front end. As chalky as this sounds, the best option is to use both Chad Brown entries, as they represent the best speed and best closer in the race.