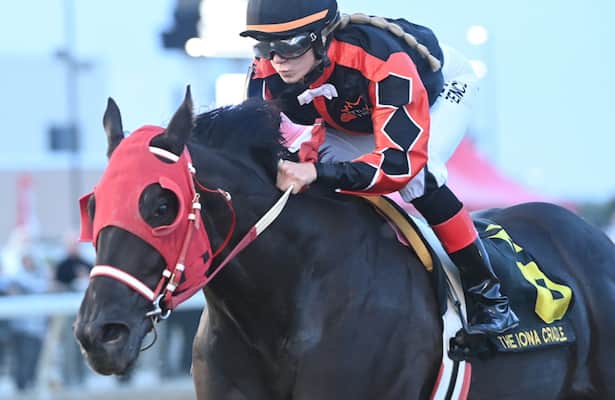 For bettors, Tyler’s Tribe always will come across as a tough horse to wager on from a value standpoint. Horses who attract a fanbase tend to become underlaid more often than not, and this gelding has a sizable number of fans thanks to his performances at Prairie Meadows.

Even though his fanbase will hurt the odds, Tyler’s Tribe is spotted well by trainer Timothy Martin this week. The gelded son of Sharp Azteca makes his first start since the Breeders’ Cup Juvenile Turf Sprint in the $150,000 Advent Stakes on Friday at Oaklawn. The ungraded race is a 5 1/2 furlong dirt sprint for 2-year-olds, which sounds perfect for Tyler’s Tribe.

Considering Tyler's Tribe owns both the best early speed in the race and best speed figure, it is probably a waste of time to try to beat him.

According to TimeformUS Pace Projector, Tyler’s Tribe is supposed to set the pace uncontested, with a noticeable gap to the trio of Count de Monet in second, Alto Road in third and Too Much Info in fourth.

The projection makes sense. In Tyler’s Tribe’s dirt starts before the turf debacle, he always led by one or two lengths in the opening quarter.

As for speed figures, Tyler’s Tribe has been the only runner in the field to break 100 on TimeformUS consistently, and he does it with crushing final margins.

In the Iowa Stallion Futurity on July 30, Tyler’s Tribe won by 12 1/2 lengths with a 105. One month later in the Prairie Meadows Freshman Stakes, he won by 15 1/2 lengths with a stunning 120 TimeformUS figure. As seen below in the Freshman replay, jockey Kylee Jordan asks him only mildly in the stretch.

It helps to watch the race and feel how Tyler's Tribe wins visually. The numbers can tell only part of the story when handicapping most races.

The only other entry to break 100 on TimeformUS is Frosted Departure, who ran a 110 when he took an optional claimer at Churchill Downs on Sept. 16 by an impressive 9 1/4 lengths after setting the pace.

Frosted Departure’s 110 might end up as an anomaly, given his recent start. Forget about his two route attempts in the Breeders’ Futurity (G1) and Street Sense Stakes (G3) after the winning effort in the optional claimer. Last month, Frosted Departure cut back again in the 6 1/2-furlong Ed Brown Stakes at Churchill and ended up hanging for third with an 89.

Although he could pull off a surprise, Frosted Departure's normal effort is not good enough to defeat Tyler's Tribe. The 110 feels out of line.

At first glance, Tyler’s Tribe’s 120 might seem like an anomaly as well, given the two 105s that surround it on TimeformUS. But note the Freshman runner-up Runtoday, who passed the tired Dixiemagic when nearing the turn and ended up finishing second and 15 1/2 lengths behind the winning Tyler’s Tribe. In Runtoday’s next start, he ran second again in the Shakopee Juvenile Stakes at Canterbury Park, losing by 9 3/4 lengths to Two Phil’s.

In Two Phil’s next two starts, he ran a troubled seventh in the Breeders’ Futurity before going on to win the Street Sense Stakes (G3) by a clear 5 1/4 lengths.

Given the measuring stick of Runtoday, even those who do not believe in speed figures can feel confident that Tyler’s Tribe owns legitimate talent and can turn in another big effort in his first dirt start outside of Prairie Meadows.

Yet, the 3-5 morning line odds on Tyler's Tribe are unappealing and liable to drop even further given the fanbase following him.

The best candidate for second is Happy Is a Choice, who also starts as the second choice on the morning line at 9-2. This Runhappy colt is on the improve after breaking his maiden by five lengths in his third start on Oct. 23 at Keeneland. For the winning effort, he earned an 88 on TimeformUS.

Happy Is a Choice also shows a 96 raw final figure for that same maiden race after tracking slow fractions, which means TimeformUS probably adjusted the number down to 88 because of the pace. If Happy Is a Choice can repeat or improve on the Keeneland maiden effort, then he has a good chance at finishing second to Tyler's Tribe in this spot.

In other words, a straight ticket of Tyler’s Tribe over Happy Is a Choice is the play. Happy Is a Choice can stalk from the outside and move when the time is right, or he can defend second if he tracks the the pacesetter early.

Skipping the race also is logical. Bettors can always wait until they find a better race to attack rather than taking 3-5 or less on Tyler’s Tribe, especially since he enters off a bad effort in the Breeders’ Cup.