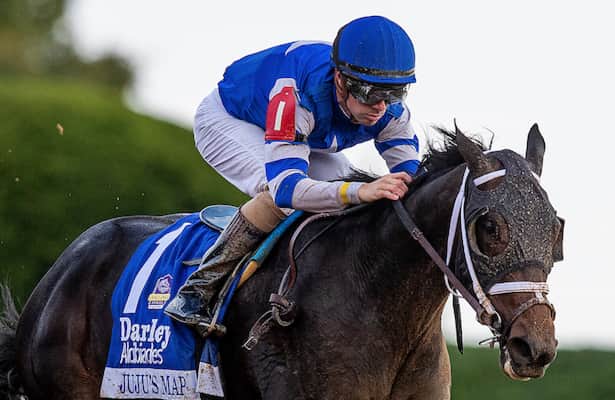 Here are the final blog selections and wagers for Breeders’ Cup Day 1, including a Pick 4 starting with the Juvenile Fillies single.

From a visual standpoint, both Echo Zulu and Juju’s Map look impressive as well, as they only needed mild encouragement to open up late and win their most recent starts.

Yet, Echo Zulu is likely to run at lower odds than Juju’s Map, which adds value to Juju's Map's corner.

To add another point in Juju’s Map's favor, she already owns a two-turn route win at 1 1/16 miles, while Echo Zulu won the one-mile Frizette around one turn.

Juju’s Map also appears more willing to settle a few lengths back if necessary, but she can set the pace as shown in her maiden win.

Although Echo Zulu might handle two turns, it makes sense to play the higher price in Juju’s Map if she already owns a two-turn win and equal speed figures. If Echo Zulu at 4-5 beats Juju’s Map, then who cares?

Juju’s Map is the single.

Based on watching replays for all 14 entries, the only filly that stands out is Haughty, who recently broke her maiden for trainer Chad Brown.

Haughty crossed the wire first by 3 1/4 lengths in a Sept. 17 Belmont maiden race. But she was disqualified for interfering with Diamond Hands at the top of the stretch and knocked down to third.

Forget about the foul and watch how easily Haughty drew clear from the Belmont maiden field in mid-stretch. Jockey Junior Alvarado did not even urge Haughty as she beat the closing Gal in a Rush without trying. In Gal in a Rush’s next start, she went on to finish second in the Matron Stakes (G3).

In Haughty’s second start, she broke her maiden by four lengths in an Oct. 17 maiden race at Keeneland. Once again, she won in a dominating fashion. Jockey Tyler Gaffalione gave only a few light reminders in mid-stretch to keep going, and she responded nicely by opening up.

Post 11 also works fine in a two-turn route, as Haughty can use her speed to clear the middle and establish a good stalking position.

Haughty is the only pick for this race.

With the expected favorite Jack Christopher and the Bob Baffert-trained trio of Corniche, Barossa and Pinehurst entered in this race, a fast pace is possibly brewing. Even if Corniche fails to cross over from Post 14, Barossa or Pinehurst could apply early pressure on Jack Christopher early.

This feels like a good race to spread with closers.

Commandperformance was discussed multiple times here. He owns the second-highest TimeformUS Speed Figure in this field with a 116 after his closing second to Jack Christopher in the Champagne Stakes (G2).

Just from a visual standpoint, Commandperformance looks more likely to handle a two-turn route than Jack Christopher. Although Commandperformance lost by 2 3/4 lengths, he cut significantly into the lead and sports a better pedigree overall for handle the extra distance.

Other interesting closers to consider are Oviatt Class and Giant Game.

Oviatt Class made a mild closing bid for third in the American Pharoah Stakes (G1) at Santa Anita. He lost by 3 3/4 lengths to Corniche, but there is plenty of room to improve.

As for Giant Game, he cost quite a bit last year as a $500k yearling purchase. He deserves respect off his maiden win by three lengths on Oct. 9 at Keeneland.

Giant Game's 90 TimeformUS Speed Figure for the maiden breaker looks slow. Remember, though, that a slow pace sometimes can complicate speed figure making because figures are attached to the final time. At a minimum, a slow pace makes the figure hard to use as a measurement of a horse's ability. He is capable of a faster race.

With a fast pace ahead, expect a good effort from this developing colt.

Jack Christopher won the Champagne with a huge 123 on TimeformUS, but his win odds are unappealing. Regardless, Jack Christopher is usable in longer multi-race wagers, along with the second choice Corniche.

For those playing win or place bets, Commandperformance is the better option, or even the long shots Oviatt Class and Giant Game.

The European invaders Modern Games, Albahr and Dubawi Legend all give the impression of being solid contenders off their recent starts.

Modern Games carries a two-race win streak to North America, including a 2 1/2-length win in the Somerville Stakes (G3) at Newmarket.

Albahr already owns experience on this continent after taking the Summer Stakes (G1) at Woodbine by 2 1/4 lengths for trainer Charles Appleby. In addition, Albahr won his last three races in England, which gives him a ton of momentum heading into the Breeders’ Cup.

Dubawi Legend exits a second-place finish in the Dewhurst Stakes (G1). He lost by two lengths to Native Trail, but that is a good horse. Native Trail previously had won the Vincent O’Brien National Stakes (G1) at the Curragh.

From watching the Dewhurst Stakes replay, it also appears Dubwai Legend owns useful speed, which he could use to clear the field from Post 14.

The most interesting American in the Juvenile Turf is Dakota Gold, who won the Nownownow Stakes at Monmouth Park by 2 1/2 lengths. Between the runner-up Royal Spirit and the third-place Coinage came another six lengths.

Spaced-out margins do not come as often on turf as on dirt. Coinage started at 4-5 and previously won the With Anticipation Stakes (G3) at Saratoga. The fact that he lost by a significant margin is a good sign.