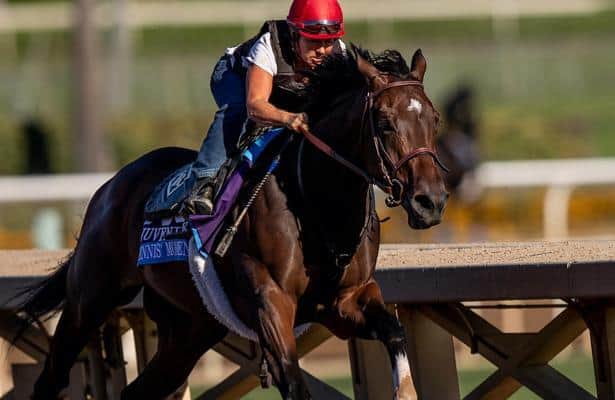 Dennis’ Moment won his first race in a little over two years when he took an allowance optional claiming race at Keeneland on Oct. 21.

As a bettor, there are two questions to think about when Dennis’ Moment runs again this week. Can he step forward as a win threat in the Grade 3, $100,000 Mr. Prospector Stakes at Gulfstream Park on Saturday? And will he offer enough fair value to make him a good bet?

Based on the probables list on the Horse Racing Nation Stakes Tracker and the full nominations list, Dennis’ Moment might hold a chance to score his first graded-stakes victory since the 2019 Iroquois Stakes (G3).

As of this writing, the other four names found on the Mr. Prospector 2021 page are Endorsed, Officiating, Poppy’s Pride and Wind of Change. None of those four runners are monsters by any means. With Dennis' Moment's best effort relative to his current form, he can beat them.

Endorsed did finish second in the Louisville Thoroughbred Society Stakes on Sept. 18 at Churchill Downs, while Dennis’ Moment faded to fifth in the same race. Regardless, Dennis’ Moment could turn the tables on him, assuming the recent Keeneland win gave him added confidence.

In the full nominations list, the two names that stand out are Drain the Clock and Ny Traffic, two horses who are proven runners at the graded-stakes level. Drain the Clock is scheduled to make his return in a local optional claiming race on Friday, while Ny Traffic recently had a virus.

Ny Traffic posted three workouts in October before stopping for a month. He then came back to the worktab on Nov. 22 and 28. Even if Ny Traffic was returning, he likely needs more than two workouts to get in shape, although trainer Saffie Joseph Jr. did not completely rule the race out.

Assuming Drain the Clock and Ny Traffic do not show up, Dennis’ Moment can continue the momentum from his Keeneland win. He is capable of beating a somewhat weak Grade 3 field in the Mr. Prospector.

As for whether Dennis’ Moment is a good bet in the Mr. Prospector, this is a different question altogether. The answer is probably no. His name remains too popular to offer fair value.

With past stars such as Dennis’ Moment, most bettors emphasize what the horse accomplished in the past. In Dennis' Moment's case, his 2-year-old campaign resulted in him breaking his maiden by an incredible 19 1/4 lengths at Ellis Park. Afterward, he won the Iroquois Stakes (G3).

The problem is that Dennis' Moment never progressed off his 2-year-old form. Right now, he hovers between optional claiming and lower stakes races. Most observers thought he would develop into a top racehorse.

Bettors tend to stick to familiar names such as Dennis’ Moment, no matter whether their form does not match their old standout races in the past. Another example of this pattern is Code of Honor, who takes money in races today based on his 3-year-old form, which included wins in the Travers Stakes (G1) and Jockey Club Gold Cup (G1) against his elders.

Even if Dennis’ Moment could win the Mr. Prospector, this is a game where bettors try to outsmart the public by picking overlaid. If every casual bettor is also a fan of Dennis’ Moment, the value is not there.

Look at the win odds on Dennis’ Moment in his last four races since finishing last at 6-5 odds in the 2020 Fountain of Youth Stakes (G2). He has started at 2-1 in three optional claiming races, including the Keeneland win, and 9-2 in the Louisville Thoroughbred Society Stakes. That means he lost twice at 2-1 and three times at 9-2 odds or less.

What if Dennis’ Moment is both underlaid and looks like a winner on paper? There is no rule saying every stakes race must get bet. There are other races to attack on the Gulfstream card and at several other racetracks. Of all those other races at Gulfstream and elsewhere, there is probably a better bet than Dennis’ Moment.

Then again, this is a grumpy way to approach betting races. Perhaps some racing fans can bet their favorites and win sometimes.

From a cold betting perspective, though, it is not a great idea to bet a horse who can garner attention and wagering dollars on his name alone. In most cases, fan favorites do not create good betting opportunities. Dennis’ Moment fits that description, which makes him a horse to avoid on Saturday.