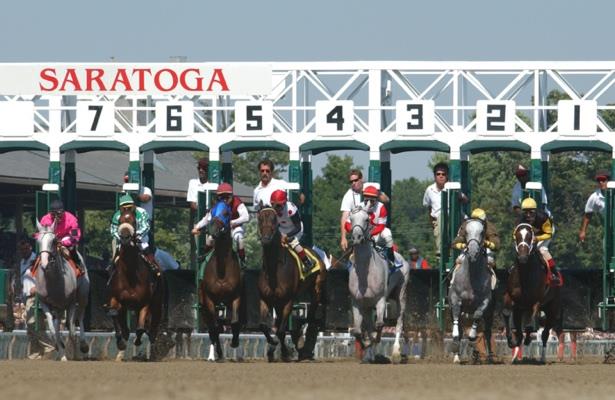 With most 2-year-old stakes races in late summer, the public favors stakes-experienced runners with known connections. This leaves the door open for value if that horse is not actually the best one on paper.

For example, in the Grade 2, $150,000 Saratoga Special on Friday at Saratoga, the expected favorite is Cazadero, who is trained by Steve Asmussen. Cazadero won the Bashford Manor Stakes (G3) in June at Churchill Downs by 4 3/4 lengths, earning a 92 TimeformUS Speed Figure, 92 BRIS Speed Rating and 80 Beyer Speed Figure in the process.

But those figures are not even the highest in the field.

If the pubic favors Cazadero, he presents an underlay given the presence of Therideofalifetime, who stands out visually and shows a higher last-race figure.

Therideofalifetime broke his maiden by 8 1/4 lengths on July 11 at Keeneland. The race is not available on social media, but it deserves a watch if possible.

At the start, Therideofalifetime breaks a few steps ahead of the field. Once he secures the lead, he settles down and sets a reasonable opening quarter of 22.45 followed by a 46.02 half-mile around the turn. When Jose Ortiz asks him in mid-stretch, he opens up like a good horse and finishes powerfully for an 8 1/4-length victory.

From a visual standpoint, Therideofalifetime did nothing wrong in that win. He traveled in a professional manner by relaxing early and listening to the jockey when asked to go in mid-stretch. He also ran in a straight line with the proper lead switch.

Therideofalifetime earned a 104 on TimeformUS, adjusted down from a 107 because of the slow pace. He also earned an 85 on Beyer and 94 on BRIS.

Does Therideofalifetime hold the high figure on Beyer? This writer does not own access to DRF past performances. He probably does.

In that race, Therideofalifetime broke fine, but he initially lost ground as Jackie’s Warrior utilized his speed on the inside to contest Petit Verdot.

But the wire came up and Therideofalifetime settled for second.

Therideofalifetime shows plenty of life after the wire by galloping out past Jackie’s Warrior, although analyzing that part is not a high priority.

Based on the above factors, Therideofalifetime is the choice. Will he go off favored? Usually, the public does not overbet horses trained by Ignacio Correas. In all likelihood, Cazadero holds as the favorite because of his previous stakes win and more high-profile connections.

But the subject of who goes off favored is debatable.

For a third option, Jackie’s Warrior is not a bad choice.

Jackie’s Warrior earned respectable figures of 90 on TimeformUS and 86 on BRIS when breaking his maiden against Therideofalifetime.

As Cazadero’s stablemate, Jackie’s Warrior also trains with him for Asmussen. Watch their five-furlong July 26 workout on XBTV.

Toward the middle part of the replay, Jackie’s Warrior travels well though the stretch and past the finish line as Cazadero gets asked repeatedly to keep up with his stablemate entering the turn. Given the rider is leaning left, Cazadero also does not seem to corner well.

Jackie's Warrior loses Ricardo Santana Jr. to Cazadero, but Joel Rosario is a fine replacement. He is the second choice in this analysis.

Now to discuss Cazadero again. On the plus side, he did win the Bashford Manor over a promising field by 4 3/4 lengths. He also broke his maiden by 8 3/4 lengths.

As pointed out though, his speed figures are lower than Therideofalifetime. If the public makes Cazadero the favorite, why take him when there is a faster option at a higher price? Also, why take Cazadero as favorite when Jackie’s Warrior clearly outworked him?

Cazadero is best used as a backup in multi-race wagers. It is possible that he moves forward and wins, but he does not look like the best one.

For a fourth option, Momos is one to think about as well.

Momos broke his maiden on this course by 6 1/2 lengths for the hot trainer Christophe Clement, and he accomplished the win easily enough.

The only knock against Momos are the speed figures, as he only earned an 88 on TimeformUS, 82 on BRIS and 75 on Beyer. Given these horses are still learning the game, it is not hard to imagine Momos moving up by a significant margin. But deciding he will improve is still a guess.

Right now, there is no evidence that Momos is faster than the three horses discussed above, but he is usable as a B or C option.

Unless the public makes his odds low to a crazy point, Therideofalifetime is the best choice on top. From Post 9, Ortiz can watch the break and decide on whether to lead or stalk the pace. He is fair value at 5/2 and a good bargain at higher odds than 5/2.

Rely on Therideofalifetime in vertical tickets, but think about including Jackie’s Warrior, Cazadero and to a lesser extent Momos in the pick 4.