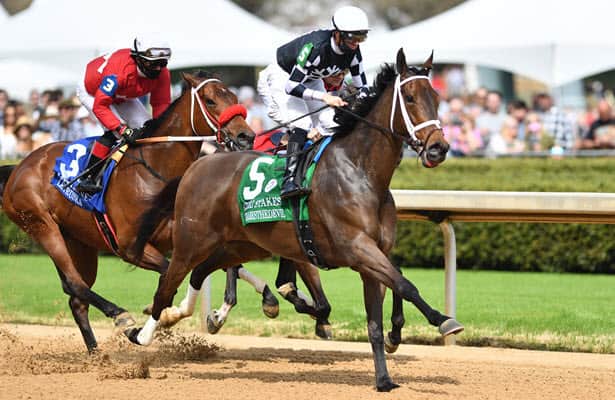 Finding value betting-wise in a female Preakness Stakes champion is not easy. Because of the historical importance of Swiss Skydiver’s win last October, she is likely to remain quite popular for the rest of her career from a fan and wagering standpoint.

When Swiss Skydiver starts in the $500,000 Ogden Phipps Stakes (G1) on Saturday at Belmont, though, her odds might actually appear attractive for this race after losing two of her last three starts since the Preakness effort. On the morning line, she is tied as the second choice at 5-2 with her old rival Shedaresthedevil.

Both of Swiss Skydiver’s losses since the Preakness are forgivable.

In the Breeders’ Cup Distaff, Swiss Skydiver stumbled at the start. After gathering herself together and attempting to make an inside bid on the far turn, she faded.

At the top of the stretch, she almost reached even terms with Harvest Moon.

Given the early stumble, most handicappers would forgive Swiss Skydiver’s effort regardless of whether she tried to make a serious bid. The fact that Swiss Skydiver showed interest and wanted to get back into the race is a positive sign. She failed to sustain the move, but she had to work hard to even get back into position.

Swiss Skydiver began this year strong with a 2 3/4-length win in the Beholder Mile (G1), earning a 122 TimeformUS Speed Figure in the process.

In her second start of the season, Swiss Skydiver faced tough opponents in the Apple Blossom Handicap (G1) at Oaklawn in Monomoy Girl and Letruska. Unfortunately, Swiss Skydiver received a questionable ride from Robby Albarado.

At the start, Albarado visibly urged Swiss Skydiver forward. Yet, when Letruska tried for the lead, Albarado opted to settle behind her and let his mount eat dirt.

From there, it seems Irad Ortiz Jr. gave a masterful ride on Letruska by leaving a small opening to bait Swiss Skydiver into moving inside and then closing the path.

Listen for how the announcer Vic Stauffer said, “Letruska is the controlling speed. She has left the rail open for Swiss Skydiver if she is bold enough to go through there.” Then, the gap closed after he announces there is an opening for her.

Swiss Skydiver got one last chance on the far turn when Letruska finally came out slightly and met Monomoy Girl eye to eye, leaving the rail open. She was empty, though, and that is fair after being urged for no reason out of the gate and enduring the poor trip behind Letruska and next to Monomoy Girl on the far side.

Albarado kept urging Swiss Skydiver for a little while longer, but there was nothing there. She finished third by 6 1/2 lengths, earning a 116 on TimeformUS.

At 5-2, Swiss Skydiver deserves another chance from bettors.

This time, trainer Ken McPeek replaces Albarado with Jose Ortiz. Also, Shedaresthedevil is entered in this race and might end up weakening Letruska when their natural running styles clash. Even though Shedaresthedevil is capable of sitting one or two lengths behind the leaders, Florent Geroux probably does not want to let Letruska slip away uncontested. Letruska and Shedaresthedevil could separate early on.

Of course, that is an ideal scenario for Swiss Skydiver and anything could go wrong. But at 5-2, it is worth taking a shot.

As for a second choice, give Valiance consideration as well. She is 4-1 on the morning line and might offer almost the same ability as Swiss Skydiver, Letruska or Shedaresthedevil. The main difference is that Valiance’s running style is more conservative than those three names.

Valiance won the Spinster Stakes (G1) at Keeneland last October, beating Shedaresthedevil in third in 3 1/4 lengths with a 122 TimeformUS Speed Figure. After that performance, Valiance ran a good second in the Breeders’ Cup Distaff with a 120 on TimeformUS, losing to Monomoy Girl by only 1 3/4 lengths.

Luis Saez retains the mount for trainer Todd Pletcher. Saez figures to settle within a few lengths of the leaders on Valiance and make sure the big names up front do not slip away.

Shedaresthedevil beat Letruska two starts ago in the Azeri Stakes (G2) at Oaklawn before winning the La Troienne Stakes (G1) at Churchill Downs. The threat of a speed duel makes her unattractive, though. Letruska did not duel with her in the Azeri, but that could change here after Letruska’s speed resulted in a big victory in the Apple Blossom.

This time around, Swiss Skydiver and Valiance are the best betting options.