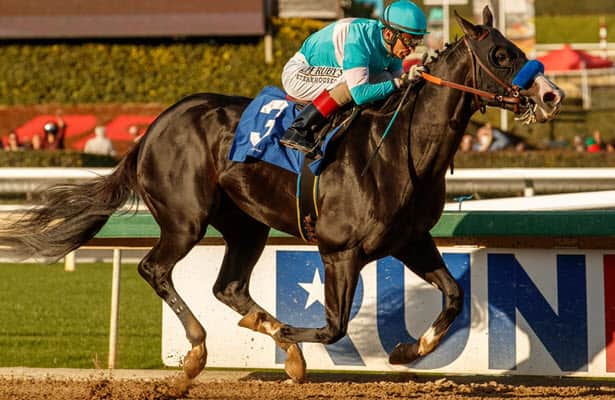 From a handicapping standpoint, Saturday's edition of the Grade 3, $750,000 Southwest Stakes at Oaklawn brings together an intriguing field, including a West Coast shipper from the Bob Baffert barn named Newgrange. Earlier in the month, he won the Sham Stakes (G3).

The goal of the analysis below is to sort out the pace scenario.

According to TimeformUS Pace Projector, there are four other speed horses for Newgrange to concern himself with. Surprisingly, Pace Projector puts Ben Diesel, Kavod and Classic Moment in front of Newgrange early in the race, while Call Me Jamal is not far behind the four horses in fifth.

The projection is probably wrong about Newgrange not being in front.

Baffert loves taking advantage of the lead, and this colt won the Sham in pacesetting fashion. Expect John Velazquez to send his mount from Post 10 and gun for the front end, regardless of whether others challenge him or back off.

Cross out Kavod from the pace battle. In his only route attempt in the local Smarty Jones Stakes, Kavod ran as a stalker through the opening quarter. If Kavod contests the lead, his move will come on the second turn.

Classic Moment might want the lead, but he is hard to read. In the Remington Springboard Mile Stakes, he held the lead only for a few moments before letting the rank Bye Bye Bobby take a slight advantage. Oddly, Classic Moment then began to lose ground early before making a mild run in the stretch for a fourth-place finish. Two starts ago in his Nov. 5 maiden win at Churchill Downs, Classic Moment took up the pressing role.

The added blinkers for Classic Moment in this spot is notable. Blinkers either help a horse focus more or add speed, or both.

Ben Diesel starts from the rail and figures to utilize his speed to secure an upfront position. But he also has faded in his last two starts, and that is something the connections might remember when deciding on strategy.

For example, on Jan. 1, Ben Diesel contested the lead in the Smarty Jones before fading to seventh. Two starts ago in the Kentucky Jockey Club (G2) at Churchill Downs, Ben Diesel faded to fourth after chasing the leader in second. The connections could try to avoid using him up again on the pace again.

Call Me Jamal has set the pace in two out of three races, including in his local Dec. 18 maiden win. He did try stalking tactics two starts ago on Nov. 28 in a seven-furlong maiden race at Churchill Downs, but he could finish only an even fourth.

Given Call Me Jamal is drawn to the right of Newgrange, he would need to clear him on the first turn in order to reach the front, and that is not likely to happen. Either he goes with Newgrange or sits slightly off him.

In other words, the stage is set for Newgrange to secure the front and lead through a moderate to slightly fast pace.

He might need to deal with Ben Diesel, Classic Moment and Call Me Jamal in the opening quarter, but it is not in the best interests of those three horses to duel with the Baffert pacesetter. In all likelihood, Newgrange should slowly establish his cushion by the half-mile point.

Even if Newgrange does not set the pace because of a bad break or other reason, those other three horses are not likely to battle each other in an all-out war. Just by studying their running lines and pace figures, they look disciplined enough to keep the fractions within reason.

To summarize these thoughts, if Newgrange secures the lead, expect a moderate to slightly fast pace as he scares off the other speed early on.

If Ben Diesel, Classic Moment or Call Me Jamal set the pace, also expect a moderate to slightly fast pace with the jockeys careful to reserve energy.

Ben Diesel drew the rail, which might encourage Jon Court to make use of his early speed from the gate. But he might settle in the pocket rather than set the pace or contest the lead again.

The added blinkers on Classic Moment might encourage him to retain his position up front rather than give it up too soon as he did in the Springboard Mile. But he gives the impression of a pressing type.

Given Baffert’s history and huge success with pacesetting speed horses, Newgrange is the most probable horse to lead the field early on.

Expect many different opinions from handicappers on the pace scenario and winner, and a good race. This is a solid early-season Kentucky Derby prep.