Lecomte analysis: This speed horse is the best single pick 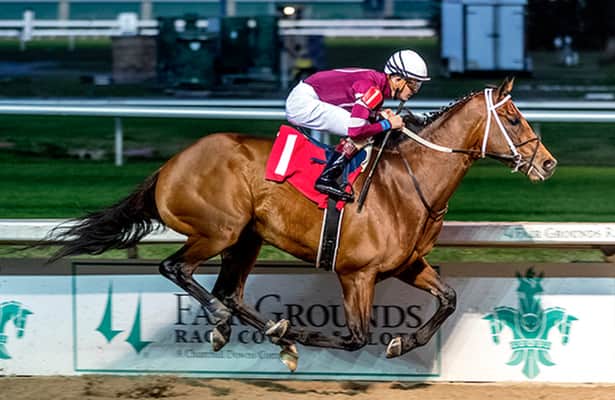 Because of the speed bias on Fair Grounds’ dirt course, the right play in the Grade 3, $200,000 Lecomte Stakes on Saturday is to favor the best speed horse, even if the pace scenario looks slightly on the fast side.

In last year’s Lecomte, the Steve Asmussen-trained Midnight Bourbon set the pace and went on to prevail in his only 2021 win.

This time, Asmussen brings a more obvious speed horse in Epicenter, who has sparred three times with another Lecomte entry named Surfer Dude.

In their first meeting, Epicenter and Surfer Dude contested the pace in a seven-furlong September maiden race at Churchill Downs. Both colts were inexperienced runners at the time and faded out of the superfecta.

The second battle between Epicenter and Surfer Dude came in November in a one-mile maiden race at Churchill Downs. Both colts contested the lead before Epicenter began to take a slight advantage on the turn and open up in mid-stretch for a promising 3 1/2-length win in his second career start.

Surfer Dude grudgingly faded to third late, although he went on to break his maiden later in the month while cutting back to seven furlongs.

Epicenter then met Surfer Dude again in the new Gun Runner Stakes on this course in late December. Similar to the last meeting, the two speed horses contested the lead on the backside, before Epicenter began to take advantage in the stretch and pull clear again for a strong win.

It is always great to see a speed horse finish off the race, rather than only hang on. In this case, Epicenter won by a margin of 6 1/2 lengths.

Epicenter meets Surfer Dude again in the Lecomte. On paper, there is every reason to believe Epicenter will overpower him for the third time.

With his 109 TimeformUS Speed Figure for the Gun Runner victory, Epicenter also owns the second-highest figure in the field. The highest TimeformUS figure belongs to Pappacap, who ran second in the Breeders’ Cup Juvenile with a 110. Pappacap does not own the same kind of early speed as Epicenter, though, and a one-point speed figure advantage is basically the same as no real advantage.

On BRIS, Pappacap holds a more notable advantage with a 100 BRIS Speed Rating earned in the Breeders’ Cup Juvenile, while Epicenter’s highest BRIS Speed Rating is a 95 from his maiden win in November. According to BRIS, Epicenter regressed in the Gun Runner to a 90, even though he improved on TimeformUS.

Given how strong Epicenter appeared in the stretch run and the bigger margin over Surfer Dude, there is more reason to believe he improved.

Is there another horse who can challenge Epicenter on the lead besides Surfer Dude? According to TimeformUS Pace Projector, Cyberknife is ahead of Epicenter and on par with Surfer Dude in terms of position.

But the Pace Projector prediction makes no sense, as Cyberknife has run as a stalker in his past two starts, even when he stretched out to a two-turn route for his local maiden win. Furthermore, Cyberknife's jockey Florent Geroux tends to avoid aggressive tactics.

Epicenter is the single. With the speed-favoring nature of Fair Grounds and the same pace opponent he has beaten twice before, he should score his third overall win and second stakes win. In all likelihood, Epicenter will gain the edge over Surfer Dude at the top of the stretch. If a stalker or closer comes, he will be too far ahead to lose.

For value underneath, consider Surfer Dude or Cyberknife.

Even though Surfer Dude probably will not beat Epicenter, he can progress with that kind of stamina-oriented pedigree. He also will offer value.

As stated earlier, Cyberknife is not likely to contest the pace. Rather, he is probable to settle within two or three lengths of Surfer Dude and Epicenter. Epicenter might hold the advantage in the stretch, but it is not hard to imagine Surfer Dude fading and losing second to Cyberknife before the wire.

Cyberknife broke his maiden locally last month on the same date as the Gun Runner. His time of 1:44.90 for the maiden win to close out the card looks only a little bit slower than the 1:44.19 by Epicenter in the Gun Runner.

Two starts ago in November, Cyberknife also shows a runner-up finish by a half-length to Classic Moment in a six-and-a-half furlong maiden race at Churchill Downs. But Classic Moment did not run well in the Remington Springboard Mile in his next start. Perhaps he threw in a clunker.

Epicenter is the top selection and only choice on top. If he breaks clean and takes up either the pacesetting or pressing position, expect him to win.

Underneath: No. 1 Surfer Dude, No. 6 Cyberknife