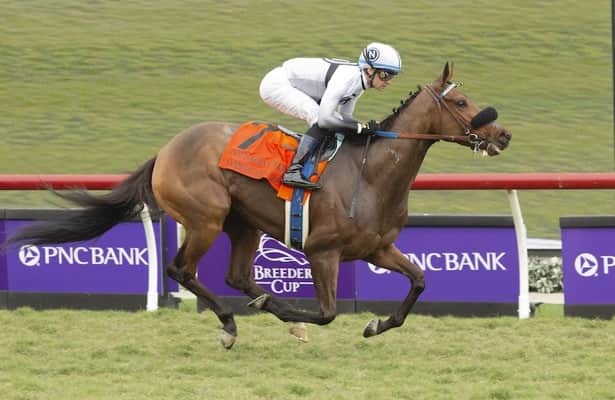 Going Global brings a consistent record to the Grade 2, $250,000 Yellow Ribbon Stakes on Saturday at Del Mar, as well as a Grade 1 win a year ago on this racetrack. Without a doubt, the daughter of Mehmas remains the filly to beat in most California female turf graded-stakes races.

But there is room for an upset if bettors believe Midwest or eastern-based female turf routers are a step above the ones in California.

For example, take a closer look at the winner of the Gamely Stakes (G1) at Santa Anita on May 30. Ocean Road won by half a length over Going to Vegas in second, with another length back to Going Global in third.

In Ocean’s Road’s start before the Gamely, she took an allowance race at Keeneland by a nose over her stablemate Flown, who went on to finish second in a Churchill Downs allowance race in her next start.

Granted, Ocean Road also had Grade 1 experience from last year by finishing sixth in the Cazoo Oaks (G1) at Epsom before she left the continent and was a non-threatening sixth in the Breeders’ Cup Filly & Mare Turf. But Ocean Road’s Keeneland effort revealed her true level.

Going to Vegas and Going Global both were mowed down by a mildly talented Keeneland allowance winner in Ocean Road on their home track.

Perhaps another shipper with mild credentials can take the Yellow Ribbon away from the home team. The 4-year-old filly Flippant debuts on the West Coast for trainer Victoria Oliver, who admittedly is not great at capturing graded-stakes races. Nevertheless, Flippant’s two previous starts this year provide enough evidence that she can compete well enough against graded stakes-level fillies and mares east of the Rockies.

Two starts ago, Flippant came off a 226-day layoff and made a nice closing move to finish third by half a length in the Miss Liberty Stakes at Monmouth. Although the race was ungraded, runner-up Vigilantes Way had credibility in her past form and continued to run well moving forward.

Although it might not seem like a big deal for Flippant to run on the same level as Vigilantes Way, remember, it only took a narrow Keeneland allowance winner to beat two top turf females on the West Coast.

Flippant next competed in the Indiana General Assembly Distaff Stakes on July 9 at Horseshoe Indianapolis. She deadheated for the win with Hendy Woods.

Despite some bad races, Hendy Woods also had credible efforts in her past performances. For example, Hendy Woods finished third by one length in the Modesty Stakes (G3) at Churchill Downs in May, where the two exacta finishers were Bleecker Street, the eventual New York Stakes (G1) winner in June, and Fluffy Socks.

Flippant finished eighth in the Queen Elizabeth II Challenge Cup (G1) last year, but she had never run in a Grade 1 before, let alone a graded race. Given Flippant needed five starts just to break her maiden, she is likely a slower developing type who could peak now as a 4-year-old filly.

Going Global still looks like the best runner in the Yellow Ribbon. Given the lower standard of racing for West Coast turf females, though, Flippant likely offers more class relative to the field than it appears. With the right pace and trip, Flippant can mow down Going Global and prevail.

As for a fair price, 9-2 or higher on Flippant is a decent deal.