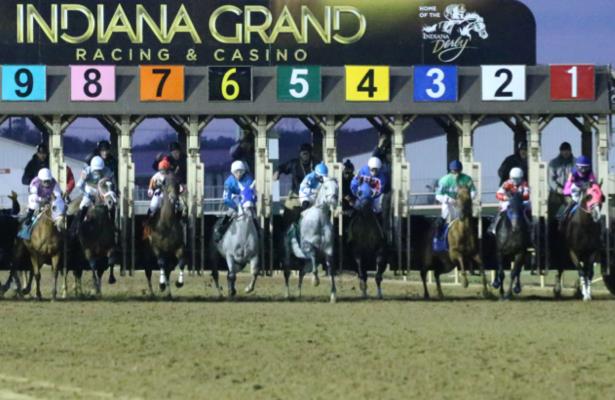 Because of the virus situation, the Grade 3, $300,000 Indiana Derby for 3-year-olds on Wednesday night has undergone a few minor changes. With the Kentucky Derby on Sept. 5 this year, this race now offers 20 qualifying points to the winner. Also, the distance is slightly increased at nine furlongs, making stamina an issue in analysis.

Despite the points and longer distance, this edition lacks a standout in the same vein as Mr. Money last summer. Rather, it is an evenly-matched collection of 10 horses separated into two categories: stuck below the top level or rising to the top.

Shared Sense is one of those horses who is capable of stepping towards the next level. To start off, he is trained by Brad Cox, who is sharp at Indiana Grand with a 29-percent winning percentage out of 99 starters over the past year (according to TimeformUS).

As for the horse's record, Shared Sense oddly never crossed the wire first in a maiden race. But weeks after he had finished second to Blackberry Wine in a Nov. 30 maiden special weight at Churchill Downs, Blackberry Wine became disqualified for a positive test.

With his maiden broken in an unusual manner, Shared Sense gave the Debry trail a shot in the Smarty Jones Stakes. He made up little ground though for a sixth-place finish, 10 ¾ lengths off the winner Gold Street.

But remember that Gold Street slipped away with a comfortable lead on slop. Silver Prospector only closed for fourth and 7 ½ lengths behind Gold Street. Yet, he returned to win the Southwest Stakes (G3).

Shared Sense did not compete in the Southwest. Instead, he won a one-mile allowance optional claimer at Oaklawn on Feb. 29.

Cox experimented by placing Shared Sense in the War Chant Stakes on turf at Churchill Downs, and he disappointed with another sixth place. Cross the effort out though, as subpar turf races do not matter on dirt.

Shared Sense returned to dirt in a Churchill Downs optional claimer on June 13. Unfortunately, he competed against a razor sharp horse in Art Collector, who won by 6 ½ lengths after enjoying an uncontested lead through a slow pace. Shared Sense picked up second late though over Finnick the Fierce and earned a career high 114 on TimeformUS.

What about the slight stretchout in distance?

Shared Sense is a son of Street Sense out of the Bernardini mare Collective. Collective is a full sister to Penwith, who won a nine-furlong optional claimer at Saratoga in August 2014. Both Street Sense and Bernardini are notable route influences as well who each won one leg of the Triple Crown in their respective careers.

On paper, Shared Sense is supposed to enjoy nine furlongs. He also does not offer a quick turn of foot, which is more conducive to a longer route.

Given that Cox loves Indiana Grand, the recent 114 figure and the excellent route pedigree, Shared Sense is the main choice.

If not Shared Sense, then Major Fed is another horse to consider.

In contrast to Shared Sense, Major Fed is already proven at nine furlongs. This colt is the runner-up horse in the second division of the Risen Star Stakes (G2) back in mid-February at Fair Grounds.

One month later, Major Fed went on to finish a closing fourth in the longer 1 3/16-mile Louisiana Derby (G2) while chasing a loose leader in Wells Bayou. What made his run notable is that he came from 11 lengths behind and closed the gap to 4 ¾ lengths. But a few observers questioned why he even started from that far back in the first place.

Two months later in the Matt Winn Stakes (G3), Major Fed became compromised by Post 10. He went seven-wide on the first turn and never factored. Cross out the Matt Winn effort, as Major Fed is better than that.

Major Fed is a logical contender in this spot as long as he does not go seven-wide on the first turn again.

For a longshot, how about Extraordinary? On his bottom side, the pedigree is there to run long as a son of Fiftyshadesofhay, a stakes router with Pulpit as the sire.

Extraordinary did attempt nine furlongs in his latest start on June 12, an optional claimer at Churchill Downs. He made a move from 10th, about seven lengths off the pace, but hung late for fourth behind Man in the Can, Dean Martini and Earner. Dean Martini won the Ohio Derby.

But why did Extraordinary settle in 10th early in the first place? In his previous three starts at shorter distances, he ran as a stalker or presser. With Luis Saez hopping on board, expect a more aggressive strategy.

Those are the three horses to consider in the Indiana Derby, with Shared Sense the preferable option for the factors listed above. As for the final bet, this is a tricky one. Perhaps use all three horses in multi-race wagers and call it a day.

In terms of the larger picture, Shared Sense has always shown some glimmer of ability. Perhaps the longer distance can help him step into the Derby trail spotlight and become a realistic factor in this division.