Analysis: Serengeti Empress could be live in Fleur de Lis 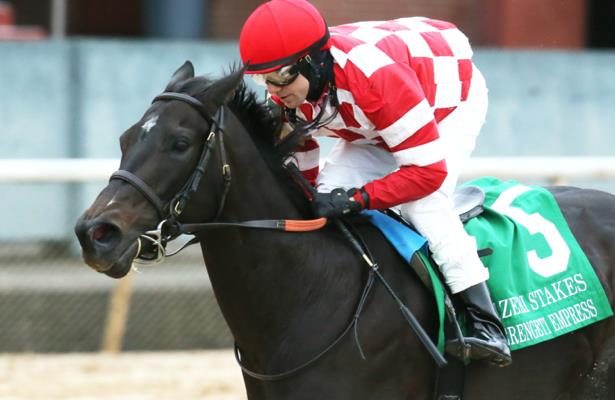 For handicappers, the 4-year-old filly Serengeti Empress is one of the most predictable runners in training. Either she secures the lead and fires, or fails to secure the lead and folds. There is zero ability to adapt.

To establish Serengeti Empress’ likelihood of securing the lead, here is a horse-by-horse rundown of each entrant and their running style.

Go Google Yourself fell 11 lengths off the pace in the Apple Blossom Stakes (G1), but that race is an outlier. Most of Go Google Yourself’s running lines indicate a stalker, one to three lengths behind the speed.

Another Broad started off six lengths behind in the local Shawnee Stakes and lost ground in the stretch, finishing fifth by nine lengths. Two starts ago, she fell 10 lengths off before closing for third in the Ladies Handicap. She owns little speed and appears outclassed.

Chocolate Kisses is an interesting entry labeled as a midpack type by TimeformUS. In her return effort though in the Shawnee, she broke sharp and displayed improved speed while under a hold in the pocket position, racing only 1 ½ lengths off the leader. Last year, Chocolate Kisses roughly settled eight to 10 lengths back in her dirt races.

Chocolate Kisses does not own the speed to duel. However, this filly fought on nicely in the Shawnee and could brighten up the trifecta.

Midnight Bisou deserves recognition as the best female dirt router. She is labeled as a midpack runner on TimeformUS.

In the Saudi Cup, Midnight Bisou ran as a closer, only losing by three-quarter lengths to Maximum Security. She also ran as a closer in the Breeders’ Cup Distaff, losing by 1 ½ lengths with a belated run to Blue Prize.

For most of her 2019 races, she was in midpack. She might lay closer to Serengeti Empress, but she does not own the speed to duel.

Red Dane is another midpack type. She closed for second in a local May 16 allowance optional claimer, losing by 2 ¾ lengths to Monomoy Girl.

Even with the runner-up finish to Monomoy Girl, Red Dane is probably outclassed. She figures to run in midpack and stay around there.

At one point, Motion Emotion owned the speed to contest Serengeti Empress. But the connections oddly chose to rate her in the 2019 Kentucky Oaks, which resulted in Serengeti Empress slipping away.

After that point, Motion Emotion continued to press the lead in her subsequent races rather than set the pace, to varying results. In seven starts since the Kentucky Oaks, she owns one win at Zia Park.

Trainer Richard Baltas knows that if Motion Emotion duels Serengeti Empress, his filly is toast. Expect her to remain a presser or closer.

In other words, Serengeti Empress is securing the front.

Now to defend her class. As mentioned, she won the 2019 Kentucky Oaks. A couple of her losses came as a result of stiff competition. For example, she did finish runner-up by a half-length to Covfefe in the Test Stakes (G1) and third in the Breeders’ Cup Distaff after leading early.

Whether or not she wins, Serengeti Empress always runs a good race with the lead. When she turns in her best, she is a Grade 1 runner.

Midnight Bisou’s accomplishments are well chroniced. Last year, she won top races such as the Apple Blossom Stakes, Ogden Phipps Stakes (G1) and Personal Ensign (G1). Midnight Bisou’s second-place to Maximum Security in the Saudi Cup also arguably makes her one of the top dirt routers in the world, if not the best dirt router, regardless of gender.

She is not invincible, though, and may start at 3/5 or less.

As stated above, Chocolate Kisses showed improved speed in her comeback race and kept fighting until the end against an established, quality filly in Dunbar Road. Perhaps she is ready for a big season.

While it might seem unthinkable that Chocolate Kisses could upset the two fillies above, the totem pole sometimes changes when 3-year-olds become four. If nothing else, the double-digit odds make it tempting.

With that said, the race is set up for Serengeti Empress.