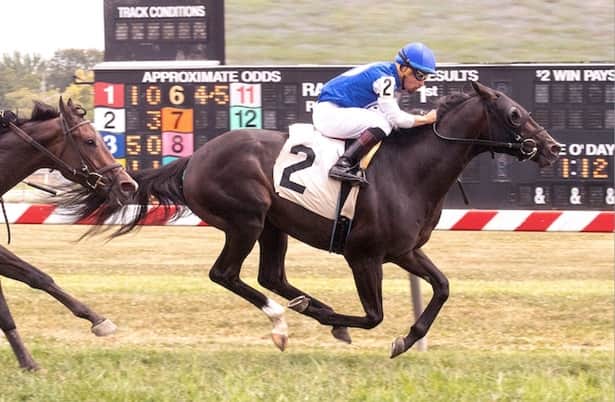 Tuesdays are a nice day to look at stakes racing action. Colonial Downs is hosting the Grade 3, $250,000 Virginia Derby on turf for 3-year-olds, while Parx Racing runs the rescheduled $200,000 Parx Dash (G3) for turf sprinters.

Here is short analysis for both races.

The key race is likely the July 24 Bald Eagle Derby at Pimlico. Two interesting Virginia Derby contenders from that race are Experienced and Indian Lake. The latter runner won the 1 1/2-mile turf race in pacesetting fashion, while the former was a closing second.

Indian Lake set a slow pace and held an uncontested lead throughout the race, which means Experienced closed from fifth to second while pace compromised. Experienced lost by only 3/4 of a length. Given that the pacesetter had all the advantages, Experienced arguably ran the best race in his runner-up finish.

How is it possible for a horse to lose and still run the better race? If the circumstances of the race means the losing horse ran harder overall, such as in an extreme pace scenario, or overcame other types of trip adversity to still threaten the leader, then it is fair to say the troubled horse performed better.

This is a nine-furlong race, but Experienced also is proven at a shorter route distance. He broke his maiden at one mile and 70 yards in a June 21 race at Delaware by a nose. In that June 21 maiden race, three horses came back to win their next starts: runner-up Mohs, third-place Entertainment and fourth-place Union Gen. George.

If Experienced can avoid traffic as a closer and receive pace ahead of him, he can win. He might overcome a slow pace as well. Even though he is the favorite at 7-2, those are mild odds that offer value.

Including Indian Lake in tickets is not a bad idea either.

What if the pace runs slow again? Cutting back to nine furlongs, Indian Lake might find himself in a stalking position rather than setting the pace. Still, the gelded son of Daredevil owns enough speed to sit within one or two lengths of the pacesetter in a race that lacks a fast pace on paper. In other words, his early position looks ideal.

While it is preferable to take the horse who overcame adversity and lost by only a small margin, Indian Lake looks capable of winning too.

The third preference in this analysis is Search for the Truth, who does not exit the Bald Eagle Derby. Instead, he broke his maiden locally by 11 1/2 lengths on Aug. 10.

No one expects Search for the Truth to win by 11 lengths in this spot, but it is obvious he owns talent. He could step forward in his stakes debut. According to TimeformUS, trainer Michael Dickinson won his only two starts at Colonial Downs in the last year. In 12 overall starts in the same period, he has won four times.

On paper, The Critical Way is an ultra-consistent 7-year-old gelding with 17 trifecta finishes in 26 starts. As in most of his races, he deserves respect once again.

The Critical Way carries a two-race win streak into this five-furlong turf sprint. Those wins at Monmouth include the Get Serious Stakes by three lengths and the Wolf Hill Stakes by 3/4 of a length. This year, the 7-year-old gelding has never run worse than third.

Yet, he did lose by a neck to Firecrow fair and square after controlling the pace in the Jim McKay Turf Sprint on May 15 at Pimlico. Firecrow is in this race as well. The downside to Firecrow is that he shows no starts since May 15 and only two workouts. Regardless, longer multi-race wager bettors might find a spot for him.

If both of those speedballs fail, Francatelli might turn the tables on The Critical Way after finishing third to him in the Get Serious. He had some inside trouble in that race, as the running line comments note that he was tight on the rail and steadied.