Oaklawn Mile analysis: Who will benefit from pace setup? 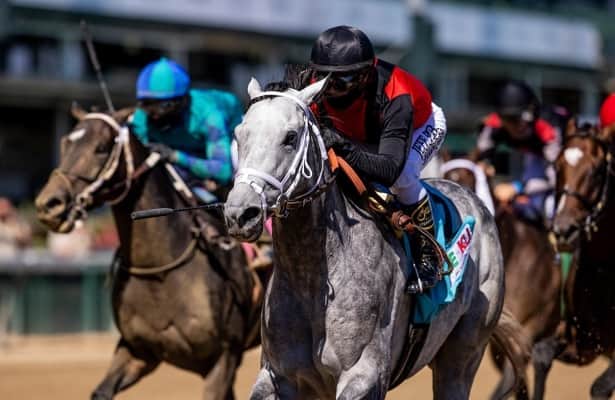 Rushie enters the $400,000 Oaklawn Mile Stakes on Saturday with promising credentials from his 3-year-old season and signs that he can overcome a five-month layoff. He faces eight other older horses for trainer Michael McCarthy, and the pace scenario on paper favors him.

Last year, Rushie broke his maiden at Santa Anita to start off his campaign over a quality field. He beat a notable closer in third named Kiss Today Goodbye, who later won the San Antonio Stakes (G2) in December.

After that race, Rushie had to face the talented Charlatan in his next start, and Charlatan crushed him by 10 1/4 lengths in an optional claimer. At least Rushie held second and put up a 110 TimeformUS Speed Figure as well. Charlatan is active as one of the top older horses in America.

In May, Rushie flew to Oaklawn and won a one-mile optional claimer by 1 1/4 lengths over Candy Tycoon, the runner-up in the Fountain of Youth Stakes (G2) earlier in the year.

Then, Rushie went back home and ran third in the Santa Anita Derby (G1), finishing only four lengths behind the winner Honor A. P., with the future Kentucky Derby and Breeders' Cup Classic champion Authentic a troubled second. Following Rushie’s successful debut in a graded stakes race, he then ran third again in the Blue Grass Stakes (G2) at Keeneland.

In the Blue Grass, Rushie finished a fading third by 8 1/4 lengths. In fairness, he lost to the “good” version of Art Collector and Swiss Skydiver.

Two months later in September, Rushie won the Pat Day Mile Stakes (G2) at Churchill Downs for his first graded victory. Another two months later, Rushie then threw in a clunker by finishing a non-threatening seventh in the Breeders’ Cup Dirt Mile. For a developing 3-year-old, though, Rushie still put together a decent season that should set him up for an even better 4-year-old campaign.

Rushie figures to make the next step forward early.

To counter the layoff concern, he fired off a three-month layoff last year for that early maiden win in February. Also, he has three bullet workouts since Feb. 24.

One of Rushie’s recent workouts came on March 20, when he took a spin around the Santa Anita track in company with Ce Ce, the Beholder Mile (G1) and Apple Blossom Handicap (G1) winner last year. The two of them went in a blazing 46 flat for four furlongs. Also notice that Ce Ce won her first three starts in 2020 for McCarthy last season, showing that McCarthy can fire off the layoff with the right horse.

According to TimeformUS Pace Projector, the Oaklawn Mile is likely to host a fast pace with Wells Bayou, Blackberry Wine, Pioneer Spirit and The Sound offering speed. Wells Bayou and The Sound are stablemates. If trainer Brad Cox decides to rate one, then the other will probably send.

In any case, Rushie does not typically run several lengths off the pace. The Breeders’ Cup Dirt Mile effort was an anomaly where he fell 8 1/4 lengths behind.

In the Pat Day Mile, he ran as a stalker only about a length off the lead.

Watch Rushie gradually pull away in the stretch.

Rushie shows a 100 late pace rating on TimeformUS, which is the second highest in the field. The highest rating belongs to By My Standards at 104, but it is difficult to trust him after off-the-board finishes in the Breeders’ Cup Classic and Clark Stakes (G1).

As long as the main speed players remain in the race, Rushie is the top choice. He can sit right off the the front pack and pounce.

The only question left is how to play Rushie. If he stays at his morning-line odds of 3-1 or higher, then he is a fair win bet.

For an interesting exacta wheel, one strategy is to beat By My Standards in second for value. Blackberry Wine and Wells Bayou are obvious choices for second, while Home Base at double-digit odds is also one to give serious consideration.

Notice that Home Base’s recent 114 TimeformUS Speed Figure for finishing third in a local allowance is competitive against this group. For example, Wells Bayou ran a 112 in the Louisiana Stakes (G3). Rushie’s last two TimeformUS figures in 2020 were 117 and 116. Blackberry Wine shows a recent 123 on TimeformUS, but that is possibly an anomaly.

Here is the betting strategy in plain numbers.