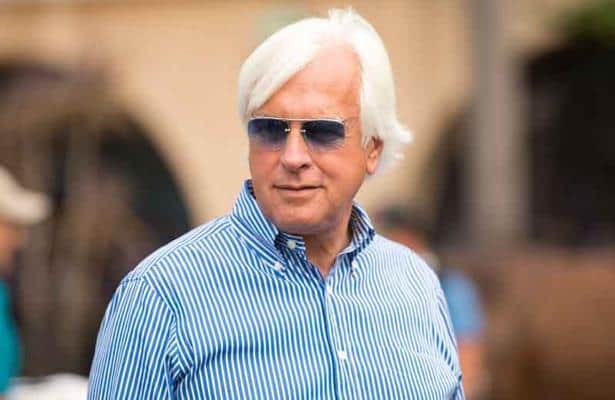 Analyzing horses making their first start in North America can be difficult. In the case of Roman Rosso, he enters the Grade 1, $1 million Pacific Classic as the mystery horse for Hall of Fame trainer Bob Baffert after making most of his previous starts in Argentina and one in Uruguay. Flavien Prat will be aboard this Saturday.

On paper, the running lines of foreign horses do not appear in the past performances. Only the finishing position shows, along with information on the time and type of race. If using TimeformUS, performance figures with a completely different formula used than the figures over here are occasionally given. This makes studying difficult.

The missing elements force handicappers to watch replays, which is a good habit to get into for any race, no matter whether there are invaders. It helps see the wider picture.

Visually, this was not a good effort from Roman Rosso.

For the first half, he held an uncontested lead and appeared to be moving comfortably. But on the far turn, a horse named El Pendex began moving up on his own will, and when called to respond to the challenge Roman Rosso offered absolutely nothing.

Next, Roman Rosso competed on Oct. 24 at the same racetrack in the Provincia de Buenos Aires (G1). He seemed to improve, but there are a few negative points.

At the start, Roman Rosso glides to the lead. Noticeably, though, the No. 2 horse Bobby Marley receives a choke hold from his jockey before the first turn. It was clear he did not want to engage early, leaving Roman Rosso with another comfortable lead.

El Pendex challenged on the far turn, just like he did in the previous race. Surprisingly he began to labor, despite a few hard left-handed strikes from his jockey.

While Roman Rosso opened up in the stretch on his way to victory, he appeared to almost lug towards the rail. He also switched to the wrong lead when the jockey hit him right-handed late. Overall, Roman Rosso is not the smoothest traveler.

Afterwards, Roman Rosso closed out his 2017 campaign in the Gran Premio Nacional (G1) on Nov. 11 at Hipodromo Argentino De Palermo.

As usual, Roman Rosso went to the lead again. He also made the same move entering the stretch run, where it almost looks like he is lugging in a touch. To point out some positives, he won by a good margin and seems to enjoy running longer distances.

In Roman Rosso’s lone 2018 start, he competed in the Gran Premio Latinoamericano (G1) in Uruguay at Maronas. He used different tactics this time, stalking from outside.

While he settled well into his stalking position and made his same move on the far turn, eventually proving successful, look at the horses surrounding him. Roman Rosso needed everything he had to pass the 18-1 Barbon to his inside. He also held off a sharp late run from a 40-1 longshot named Leoa De Prata at the last second.

That kind of race will not hold up at the Grade 1 level in North America.

In the Pacific Classic, Roman Rosso will face Accelerate, arguably the United States' best older dirt horse right now. He won the Gold Cup at Santa Anita (G1) with top speed figures all around, and finished second in the Oaklawn Handicap (G2), which came after wins in the Santa Anita Handicap (G1) and San Pasqual (G2).

If Accelerate does not fire, there are proven graded stakes winners in Dr. Dorr and Pavel entered, too. The latter recently took the Stephen Foster Handicap (G1) at Churchill Downs.

Down the list of contenders, Prime Attraction and Justify’s older half sibling The Lieutenant are lesser threats. Those two could easily hit the board, however.

I asked a former Lady and the Track colleague and friend Sigi Mendoza about Roman Rosso. He lives in South America and can better recognize the difference between those able to make the next step forward and pretenders.

Here was his response.

No sure he is a GI caliber in the Classic distance in U.S. He can steal some Stakes above 1 1/4 m though. Also I think they should run him First in a minor Stakes, but Bafferts knows the horse more than me.

It is possible Roman Rosso will improve under Baffert’s care and show up with a good race at Del Mar this weekend. Regardless, accepting 5-1 on that risk seems like a bad deal on paper. His form in South America is not fast enough.

Maybe Roman Rosso proves me wrong, but that does not mean his value is right. “Prefer to wait and see” feels like the right approach.