Analysis: Ridin With Biden’s last figure stands out in Iselin 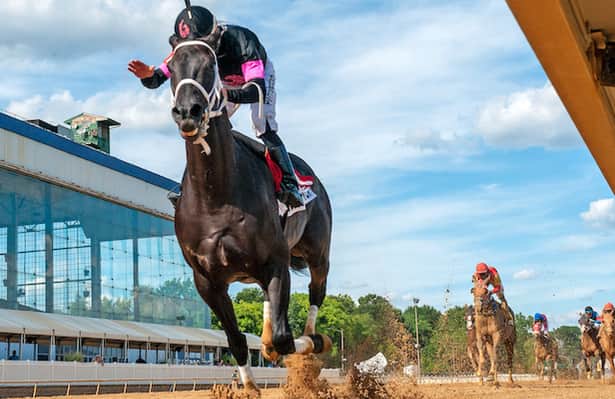 Based on overall recent form and class, Highly Motivated stands out in the Grade 3, $250,000 Philip H. Iselin Stakes at Monmouth Park on Saturday. If searching for an improving horse, though, then Ridin With Biden might be a sneaky alternative to the favorite.

Ridin With Biden came onto the national scene last year when he set the pace in the Dwyer Stakes (G3) at Belmont Park and hung in tough at 11-1 before First Captain gradually took control of the lead and won. Even though Ridin With Biden lost, he gave hope that he could compete at a high level.

But Ridin With Biden did not pan out afterward at the graded-stakes level and ran a disappointing fourth in the Smarty Jones Stakes (G3) at Parx Racing. He then lost twice at the Parx allowance level before finishing sixth in the City of Laurel Stakes to close the season.

Ridin With Biden turned in one good 2021 race at a high level in the Dwyer, and then that form disappeared in the second half of the season. But judging by his 2022 form after becoming gelded in June, Ridin With Biden looks ready to find success in graded-stakes races again.

In his first start after the ultimate equipment change, Ridin With Biden won an allowance race at Delaware Park by 3 1/2 lengths in June with a 98 TimeformUS Speed Figure. The figure was slow, but he kept improving on it.

Over the slop in the Battery Park Stakes, Ridin With Biden chased a loose Tax around the track and lost to a good horse by only two lengths. Tax had credibility in his past form as the 2019 Withers Stakes (G3) and Jim Dandy Stakes (G2) winner. He also finished fourth in the Belmont Stakes.

For the losing effort to Tax, Ridin With Biden earned a 117 TimeformUS Speed Figure, which is a number that can make him competitive in most Grade 3s.

Later in July, Ridin With Biden dominated a weaker field in the Deputed Testamony Stakes at Laurel Park by 6 1/4 lengths with a new high of 120 on TimeformUS.

The fourth-place Treasure Trove returned to run fifth in the Fort Larned Stakes at Churchill Downs by 3 1/4 lengths with a 114 on TimeformUS.

How does Ridin With Biden's 120 compare to the rest of the Iselin field?

Forza Di Oro earned a 119 when winning an allowance optional claimer at Saratoga last year for his highest 2021 TimeformUS figure. He then finished third in the Jockey Club Gold Cup (G1) with a 116 and fifth in the Woodward Stakes (G1) with a 117.

Promise Keeper has shown bad form recently after fading to third in the New Orleans Stakes (G2) and running eighth in an optional claimer at Churchill Downs. But three starts ago, he made a good closing move for fourth in the Razorback Handicap (G3) at Oaklawn while earning a 119 on TimeformUS.

The expected favorite Highly Motivated posted a 119 as well when winning the local Monmouth Cup (G3) last month by 1 3/4 lengths over Pipeline. When Highly Motivated won a Belmont allowance race in May, he also earned a 118.

Sagamore Mischief does not show a single TimeformUS figure above 110.

Informative earned a 115 when third in the Monmouth Cup. He also received a 113 when fifth behind Flightline in the Metropolitan Handicap (G1). For what it is worth, he won the 2021 Salvator Mile (G3) on this track with a 120.

If Ridin With Biden repeats the 120, he might win the Iselin Handicap at a value price. High speed figures against lower company do not always translate well when the horse steps up in class. But Ridin With Biden’s Dwyer effort last year shows he can fare well in Grade 3 races.

On paper, the Iselin pace scenario favors Ridin With Biden too. He can possibly secure the lead or sit right off the sprinter Sagamore Mischief.

With class factored in, Highly Motivated and Forza di Oro probably still rank as the two best horses on paper. But if Ridin With Biden offers the right value price, he might deserve a chance from bettors to post a mild upset.