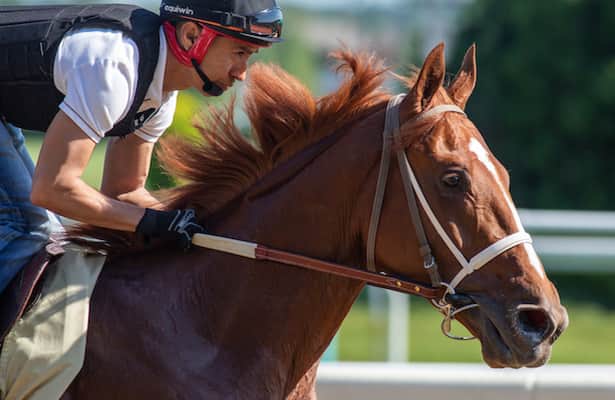 For Rich Strike and Proxy, their biggest challenge in the Grade 1, $750,000 Clark Stakes at Churchill Downs on Friday is overcoming the pace scenario. The race only contains two possible pacesetters in West Will Power and Injunction, and both speed horses can settle behind the other or convert into a presser if necessary.

Before discussing the chances of the star closers, here is some backstory on the time Injunction and West Will Power faced each other at Ellis Park in the R.A. “Cowboy” Jones Overnight Stakes. In that August race, Injunction went straight to the lead, while West Will Power opted to settle into a stalking position. Last Samurai also competed in the same race, and he provided the early pace pressure to Injunction.

Injunction held off both runners in the stretch for a narrow victory.

With Luis Saez aboard West Will Power in the Clark, perhaps Saez can get more aggressive with his mount and gun for the lead. West Will Power set the pace in his last two starts and won both races, including a 6 3/4-length win in the Fayette Stakes (G2) at Keeneland over the sloppy track. Granted, the pace was slow in each of those winning starts.

Why change a successful strategy? In all likelihood, trainer Brad Cox will instruct Saez to urge West Will Power to the front, even if West Will Power needs to work slightly harder and set a faster opening quarter.

Either way, West Will Power and Injunction project to run 1-2 throughout the opening half-mile, with Last Samurai and Trademark right behind them. Trademark posted huge 154 and 151 TimeformUS Pace Figures in his recent start. But even with those numbers, he feels more of a stalker as shown by his early positions in the running lines.

Proxy, Rich Strike and Fulsome are the remaining horses to discuss.

In most of his races, Proxy runs as a midpack closer. Jockey Joel Rosario might sense a moderate or slow pace scenario and attempt to ask his mount earlier than expected. But if Proxy falls into his natural position without getting asked, then fifth sounds like his position at the half-mile.

Either Rich Strike or Fulsome will take up the rear. To Rich Strike’s credit though, he did adjust into a stalking position in the Lukas Classic Stakes (G2) by running only two lengths off the pacesetter through the half-mile.

Fulsome does not seem as adaptable, but he did overcome the pace in the Fayette to catch Last Samurai for second. Last Samurai had been tracking the pace only two lengths off the leader for most of the race.

Expect West Will Power or Injunction to open in 24 seconds and change for the opening quarter and continue on with 47 or 48 seconds for the half-mile fraction. The pace will probably run faster than West Will Power’s leisurely lead in the Fayette through sluggish fractions of 25.17 and 49.17 seconds. But these are not crazy speed types either. Fast and tiring fractions are not expected.

Without fast fractions, how are Rich Strike or Proxy supposed to win?

Rich Strike has spent his campaign running against the best dirt horses in the country. Back in May, he won the country’s most important race in the Kentucky Derby over the 3-year-old Eclipse Award favorite Epicenter, before running a credible fourth to Epicenter in the Travers Stakes (G1), second in the Lukas Classic (G2) to the established older horse Hot Rod Charlie and fourth in the Breeders’ Cup Classic this month to Flightline.

Proxy’s 2022 record is not as impressive and lacks a graded stakes win, but he did finish second to Olympiad in the New Orleans Classic (G2), third to Scalding in the Ben Ali Stakes (G3), second to Dynamic One in the Blame Stakes and third to Olympiad again in the Stephen Foster Stakes (G2).

Olympiad recently ran an excellent second to Flightline in the Breeders’ Cup Classic. In most “normal” years without an invincible star running away with the race, Olympiad’s second that day would equal a win in the Classic. Unfortunately, Olympiad tried the Classic in the wrong year.

West Will Power might prove he can win a Grade 1 race. As of this moment though, he does not belong in the same sentence as Olympiad and Epicenter, let alone Flightline. Yet, these are types of horses Rich Strike, and to a lesser extent Proxy, competed against throughout their current season.

But again, West Will Power could also prove himself a Grade 1 horse and rise up to the occasion. He has only been in the Cox barn for three starts and he might continue to take a step forward each race. On paper though, the evidence of him being able to win a Grade 1 is not there and the price seems low for those willing to ignore his class. The oddsmaker made West Will Power an unattractive 5/2 on the morning line.

As usual, watch the tote board. If West Will Power drifts up to a more attractive price, then maybe it makes sense to bet on him to take advantage of a moderate pace at best and hold on in the stretch. Based on class though, Rich Strike and Proxy are the two most likely winners.