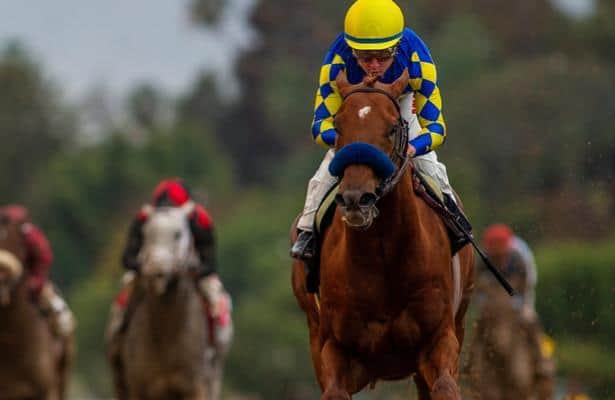 With few starts between them, deciding on the best out of those three moving forward is difficult. Determining which one of those Baffert stars can stretch out, or if all three of them can successfully is not particularly easy, either.

The Baffert trio has taken different paths on their way to the top of Derby lists, and only when horses in the same division mix together can the picture become clear. For example, look at the respect Thousand Words received until he faced better horses in the San Felipe Stakes (G2).

But if forced to choose a potential “special” horse that can get the distance out of those three, Charlatan fits the bill.

At this point, Charlatan owns two wins out of two starts. But both of those outings resulted in him exploding in the stretch in a Justify-like manner.

In his Feb. 14 maiden romp, Charlatan drew clear under his own power to win by 5 ¾ lengths over Shooters Shoot, with another 7 ¼ lengths back to Lane Way in third.

Shooters Shoot emerged from Charlatan's shadow on Sunday to break his maiden with ease. And remember, Lane Way finished third by only 3 ¾ lengths in Nadal's successful career debut on Jan. 19.

Visually, Drayden Van Dyke looked like he was only holding onto Charlatan.

Baffert stretched out Charlatan to a two-turn mile in a March 14 allowance optional claiming race, also at Santa Anita, and Charlatan did not disappoint.

Van Dyke gave him a few hits in the stretch run, perhaps only to experiment and test how Charlatan would react.

He responded with an explosive move to win by 10 ¼ lengths. From mid-stretch to the finish line, Charlatan gained at least four lengths. It is almost as if Van Dyke merely pushed a button and he responded.

Charlatan earned a 122 TimeformUS Speed Figure out of his debut. His second TimeformUS figure is not posted. But given he ran over one second faster than older filly Ce Ce a race later in the Beholder Mile (G1), the number will be high.

Charlatan's sire is Speightstown, who is known for producing sprinters and milers. But his dam, Authenticity, won the 2013 La Troienne Stakes (G2) and Shuvee Handicap (G3). When a sprinting sire is paired with a router, horses can be fine going long, which Charlatan figures to do next in stakes company.

As for Nadal, he owns three wins in three starts thanks to front-running scores in the San Vicente Stakes (G2) at Santa Anita and the Rebel Stakes (G2) last weekend at Oaklawn.

His San Vicente win offered some questions, as he contested the pace with the returning Ginobili and failed to put him away in the stretch run, fighting to a ¾-length win. Last summer, Ginobili broke his maiden over Honor A. P. But he ran fourth in the Del Mar Futurity (G1) in a disappointing effort, even after Eight Rings and Storm the Court both threw their jockeys.

Nadal stretched out in the Rebel and turned in a remarkable performance, contesting the lead against multiple waves of challengers. Nadal put them all away at different points.

Nadal only lasted by ¾ of a length over Excession. However, the talent between them is worlds apart as Excession lagged toward the back and took advantage of the setup. Put them against the same competition with a moderate pace and Nadal would smoke Excession.

Nadal's sire is Blame, who won the 2010 Breeders' Cup Classic over Zenyatta. While some pedigree analysts consider Blame a sprinter/miler sire as well, Nadal is loaded with numerous turf routing influences on his bottom side. Furthemore, his second dam, Solar Colony, is also a full sister to Pleasant Stage, who finished runner-up in the 1992 Kentucky Oaks.

From a pedigree standpoint, Nadal can go long, and clearly he is a top talent. The major question left to answer is whether he'll sit off horses when asked to relax.

That's something Charlatan must answer, too. But Nadal is a big horse who may need the lead and clear sailing for his best, such as Baffert's other giant 3-year-old Dortmund did a few years ago.

Despite the fact he owns wins in the Sham Stakes (G3) and San Felipe Stakes (G2), Authentic is last on this list for a few reasons.

He won by the Sham by 7 ¾ lengths after setting the pace. But Authentic weaved in and out during the stretch, possibly due to the crowd noise. Authentic also did not face any substantial competition of any kind.

Next, Authentic led from gate to wire in the San Felipe in a more professional manner. At the end, he won by 2 ¼ lengths over the returning Honor A. P., who made a mild bid on the turn to finish second. But Authentic also enjoyed an uncontested lead throughout the race by keeping a one-length margin on Storm the Court and Thousand Words in the opening half.

However, he did not visually explode in the stretch like Charlatan, who took off like a rocket when Van Dyke hit him in that optional claiming race. In contrast, Authentic gave a mild response to win the San Felipe by a smaller margin.

It is understood that Honor A. P. is a better horse than the ones Charlatan faced. Yet, Charlatan gave the impression he was loaded.

As for why I consider Nadal second-best in this group, well, he was actually battle-tested in the Rebel. Authentic may be the better talent in the end, but he'll need to prove it on a contested lead.

If he could only beat Honor A. P. by a modest margin this month, is he the best in Baffert's barn? Honor A. P. will only improve second off the bench in the Santa Anita Derby (G1).

From a pedigree standpoint, Authentic is also questionable going long with Into Mischief on top and the Mr. Greely mare Flawless on the bottom.

All three horses own significant talent, however, and appear poised to go on and win important races. In a sign Baffert believes in them all, he has said he'll look to keep them separated.

Right now, Charlatan is the one to watch the most. He holds special potential.