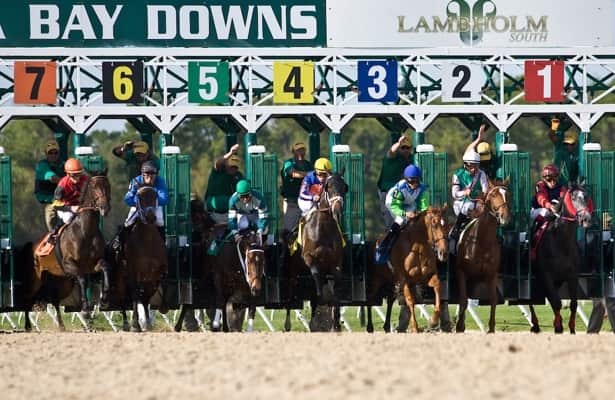 Promise Keeper makes his graded stakes debut and third start of his career in the Grade 2, $400,000 Tampa Bay Derby Saturday at Tampa Bay Downs. In a race void of fast horses, the son of Constitution could turn the tables on the favorite Candy Man Rocket, who beat him in a Jan. 9 maiden sprint at Gulfstream.

This is a different version of Promise Keeper. Also, when playing a two-turn route with multiple speed types, choosing the outside horse with speed is an advantage.

In Candy Man Rocket’s maiden win, Promise Keeper had run a distant fourth, losing by 10 1/4 lengths. For most horses, though, the career debut is only a learning experience. Not all good runners start out by dominating.

On Feb. 6, Promise Keeper made a nice move forward in his second start in a one-mile maiden route.

Over the slop, he set the pace by a small margin before drawing clear late to win by five lengths with a competitive 99 TimeformUS Speed Figure.

For those who prefer BRIS figures, he shows a high last-out 94 BRIS Speed Rating on their scale.

Either way, Promise Keeper improved in his second start. He also demonstrated the ability to handle a route, at least at one turn. Plus, he handled the slop at Gulfstream, which means poor weather would not bother him. As of this writing, the weather forecast calls for rain.

Now for the second main point. Playing the outside speed in a two-turn route is advantageous, with Candy Man Rocket's Sam F. Davis (G3) win one example. Assuming the horse clears most of the field, he can sit off the leaders in a fast pace, or apply pressure if the fractions appear too slow.

Candy Man Rocket starts from Post 3, while the other speed, Boca Boy, breaks from Post 5. In all likelihood, those two will contest the lead with each other. Promise Keeper starts in Post 11 and needs to worry only about crossing over. From there, jockey Luis Saez will know what to do.

Expect to see Promise Keeper in the clear and third early or in second as the outside presser. He holds the right cards in the early stages.

Now to discuss the favorite Candy Man Rocket in more detail. Although Candy Man Rocket won the Sam F. Davis, he did not give a great visual impression in the lane and held on by only one length over Nova Rags and a closing Hidden Stash. The latter horse took too long to get into gear and failed to switch leads, possibly costing him the victory.

Why take a short price on him? Candy Man Rocket ran in the stretch like he wanted to lose, but no horse could get to him in time. He does hold a 105 TimeformUS Speed Figure for his winning effort, but that is not an insurmountable number. At best, he is usable defensively in Pick 4s.

If not for the presence of Candy Man Rocket or Promise Keeper, Boca Boy might offer an argument to win. He had set the pace in the Sam F. Davis, but after enjoying a one-length cushion for the early portion of the race, he faded to fourth. Despite getting tired late, Boca Boy still earned a respectable 103 on TimeformUS, only two points off Candy Man Rocket's 105.

In all likelihood, Boca Boy will fade again in the stretch.

Hidden Stash is one to consider for underneath slots after losing the Sam F. Davis by 1 1/4 lengths with a closing rush. At the top of the stretch, he took too long to straighten out and set himself up for the final blow. Then, he made his move. As suggested earlier. though, the failure to switch leads before making the final move possibly cost him.

Even with those concerns, Hidden Stash is a must-use in exactas and trifectas. If the pace sets up right, he will make up enough ground to finish in the money.

At 4-1 or higher, Promise Keeper is an attractive win or place bet. He holds the tactical advantage as the outside speed horse. Plus, his most recent speed figure is in the right ballpark, no matter if one uses TimeformUS or BRIS numbers.