Analysis: Swiss Skydiver a 'play against' in Beholder Mile 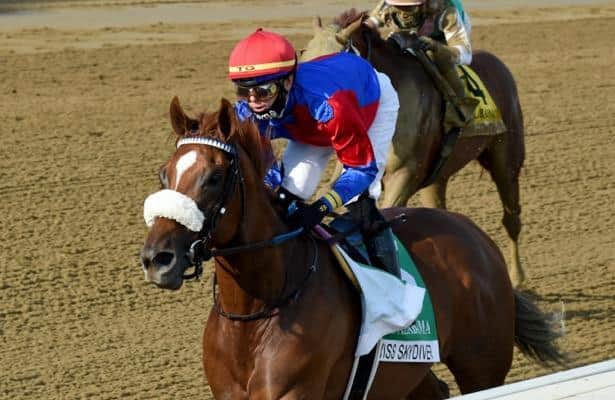 With all due respect to the champion, the expected heavy favorite Swiss Skydiver is not a great value in the Grade 1, $300,000 Beholder Mile at Santa Anita. She brings a couple of notable handicapping strikes against her, which will be explained below.

To start off, Swiss Skydiver enters the Beholder off a four-month layoff, and most horses peak in their second or third start back. To add to the layoff concern, she only shows five workouts since Feb. 5. Is five workouts enough to fire in this Grade 1 race filled with other high quality entries?

Another obstacle is the rail post. Golden Principal in Post 2 or Harvest Moon in Post 3 could attempt to shut off Swiss Skydiver and eliminate their biggest threat before the initial turn. Also remember that Swiss Skydiver drew the rail in the Kentucky Oaks and finished second at 5/2 odds.

Two months later, Swiss Skydiver did not even hit the board in the Breeders’ Cup Distaff. Yet, the public figures to forgive the effort and bet her down to even money or lower off the layoff. The rail draw will not discourage bettors either. Because Swiss Skydiver is a Preakness champion, she will remain popular. Most horses who win a Triple Crown race become poor value for the rest of their careers.

For one last strike, she is inexperienced at one mile with only one attempt. Back in November 2019 over slop, she ran second to Bayerness in a Churchill Downs optional claimer at one mile. After Swiss Skydiver’s third start, trainer Ken McPeek kept this filly at 1 1/16 miles or longer, indicating his faith in her as a runner meant for longer routes.

Given Swiss Skydiver’s biggest wins came in the Alabama Stakes (G1) at 1 ¼ miles and the Preakness, it is logical to believe that one mile might feel too short after all those longer routes. A one mile pace can be demanding.

Before deciding on Swiss Skydiver, take a look at As Time Goes By, who may end up as a rare Bob Baffert-trained runner who offers value.

As Time Goes By took a local allowance race by nine lengths on Jan. 17.

She won with total ease in a visually pleasing performance.

Her worktab also shows six works since that win, indicating a healthy and fit horse.

For the allowance victory, As Time Goes By sports a career-high 114 TimeformUS Speed Figure, which is the same as Swiss Skydiver’s TimeformUS figure in the Breeders’ Cup for finishing seventh. In fairness, Swiss Skydiver also broke 120 on TimeformUS four times in a row before the Breeders’ Cup flop. As Time Goes By only has started four times though and won the allowance race in a manner indicating she can reach that level.

Of course, thinking As Time Goes By is capable of breaking 120 on TimeformUS remains partially a guess without direct proof in the form. The difference is that she will offer more attractive odds than Swiss Skydiver.

In addition, As Time Goes By’s nine-length allowance win came at one mile, giving her the right experience over this course. The runner-up This Tea broke her maiden locally in her next start on Jan. 30 by 4 ¾ lengths with a 96 on TimeformUS. Also notable is the last-place finisher Paige Runner, who next won a local starter allowance on Feb. 21 by 13 ½ lengths with a 100.

Over time, As Time Goes By projects to enjoy even more distance as an American Pharoah half-sister to seven-figure earners Will Take Charge and Take Charge Indy. With that kind of pedigree, the sky is the limit.

For now, As Time Goes By is a great choice in the Beholder Mile. Notice that Mike Smith abandons Golden Principal from the same barn to hop on board.

Respect is also given to Harvest Moon, the winner of the Zenyatta Stakes (G1) as a 3-year-old filly last fall and fourth-place finisher in the Breeders’ Cup Distaff. The fade to fourth is forgivable considering she set the pace and only lost by 2 ½ lengths. Harvest Moon was short on experience.

However, she is not short on one-mile experience. Harvest Moon brings a sparkling 3 for 3 one-mile record, including a win in the Torrey Pines Stakes (G3) at Del Mar with a 115 TimeformUS Speed Figure.

She then ran a 120 on TimeformUS in her Zenyatta win, before posting a career-high 122 in the Breeders’ Cup for completing the superfecta.

Now, Harvest Moon returns from the same layoff as Swiss Skydiver. Does she need a race too? She is capable of winning, but it is fair to exercise caution here as well. To her credit, she shows eight workouts since Jan. 10.

Harvest Moon is the second choice.

Sanenus merits some consideration as well. In early January, she took the local La Canada Stakes (G3) by six lengths over Miss Stormy D and Hard Not to Love. From watching the race, it looks like Umberto Rispoli asked her repeatedly at the top of the stretch, and she responded well by opening up.

Sanenus now meets tougher competition. Regardless, the 121 TimeformUS Speed Figure puts Sanenus in the winning mix, although this analysis will rank her fourth, behind As Time Goes By, Harvest Moon and Swiss Skydiver.

Accepting As Time Goes By off a lower speed figure and no graded stakes experience is a risk, but the higher odds are supposed to justify the risk. Why would Baffert throw this filly into a Grade 1 if he did not believe she could win? Why would Smith abandon Golden Principal? At 5-1 or higher, As Time Goes By makes a solid Win and Place bet.

In terms of multi-race wagers, bettors without a huge budget might want to take a stand against Swiss Skydiver and use As Time Goes By and Harvest Moon to save money. It depends on how deep the other legs seem. Only throw in Swiss Skydiver or Sanenus if the ticket does not become too expensive.