Analysis: Picking the best Baffert entry in the Native Diver 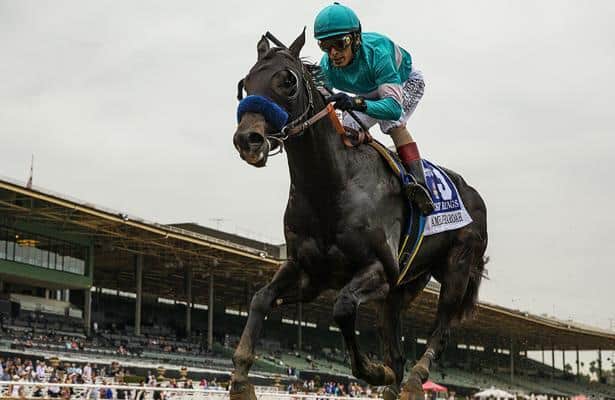 Once again, trainer Bob Baffert has a stakes race at Del Mar surrounded with three entries in the Grade 3, $100,000 Native Diver Stakes at Del Mar on Saturday. Instead, handicappers might want to focus on which one or two Baffert entries are the best options. Vertical players can find value selections to consider using underneath them.

Out of Azul Coast, Eight Rings and Ax Man, the strongest entry looks like Eight Rings. Eight Rings shows the most class after exiting a fourth-place finish in the Breeders’ Cup Dirt Mile won by Life Is Good and also running second by a neck to Dr. Schivel in the Bing Crosby Stakes (G1) in July.

Besides his Grade 1 efforts this year, Eight Rings took an optional claiming race by four lengths at Santa Anita in October after setting an uncontested lead. He also ran fourth in both the Pat O’Brien Stakes (G2) and Triple Bend Stakes (G2).

The key is that Eight Rings needs the lead. Securing the lead in shorter races against quality competition is difficult, especially against Life Is Good. Because Eight Rings stretches out to nine furlongs here, he can more easily utilize his speed to secure the lead, as long as his stablemates leave him alone.

Can Eight Rings handle nine furlongs? As a son of stamina influence Empire Maker, Eight Rings is supposed to handle the distance, although the bottom side of his pedigree seems more questionable.

Similar to Eight Rings, Ax Man has stuck to shorter distances most of his career. His life as a sprint or middle-distance runner makes sense given his one attempt at nine furlongs resulted in a fading third in the 2018 Los Alamitos Derby (G3). If Eight Rings fails though, maybe Ax Man can win. One attempt at the distance is too small of a sample.

Ax Man has been a constant sparring partner in the mornings for Medina Spirit. He does show some class of his own though. Back in March, Ax Man won the Santana Mile at Santa Anita by 4 ½ lengths over Restrainedvengence, the third-place finisher in the Breeders’ Cup Dirt Mile. Restrainedvengence beat Eight Rings by a neck in the Dirt Mile.

Ax Man’s other races this year include fourth-place finishes in the Palos Verdes Stakes (G2) and Kona Gold Stakes (G2). The latter race came in April, and Ax Man went on the shelf afterwards.

Although Ax Man enters the Native Diver off a 216-day break, TimeformUS gives Baffert a 100 rating for the 162 to 270-day layoff category.

The only question is distance. Ax Man does not sport a great route pedigree. In fact, this is a half-brother to the flashy sprinter/miler Indian Blessing. Indian Blessing won the 2007 Breeders’ Cup Juvenile Fillies at a mile and one-sixteenth, but she looked more comfortable at one mile or less.

Regardless, Ax Man can win against this field if Eight Rings misfires.

As for Azul Cost, he is not that fast. His lone highlight in his current campaign came locally in an optional claiming race, when he won by a head over Zestful in August. After that race, Azul Coast went on to cause early trouble for Tripoli in the Awesome Again Stakes (G1), before folding to a well-beaten seventh himself.

Bettors can leave out Azul Coast from the top spot. At most, maybe he can play a part in the trifecta or superfecta, even if his stablemates fail.

Eight Rings and Ax Man are the two best win options. Besides Azul Coast, which other horses are usable underneath?

Midcourt ran second in the 2020 Native Diver, losing by a length to Extra Hope. While Midcourt’s recent return race resulted in a dismal last-place finish in the Awesome Again after being eased, he has been known to throw clunkers before and come back with a credible effort afterwards.

Perhaps Midcourt only needed a warm-up race. He is a threat to hit the board in this race again, although he does need an aggressive ride.

Another value price to use underneath is Kiss Today Goodbye, who won the 2020 San Antonio Stakes (G2). This is a closer who needs pace.

While it is disappointing Kiss Today Goodbye missed the board in the Pegasus World Cup, Santa Anita Handicap (G1) and San Diego Handicap (G2) this year, he might wake up if there is some kind of duel up front.

It will take a fast horse to duel with Eight Rings though. If he secures a one-length advantage or more in the opening quarter, the race is in his hands.

Underneath: No. 2 Midcourt, No. 5 Azul Coast, No. 8 Kiss Today Goodbye